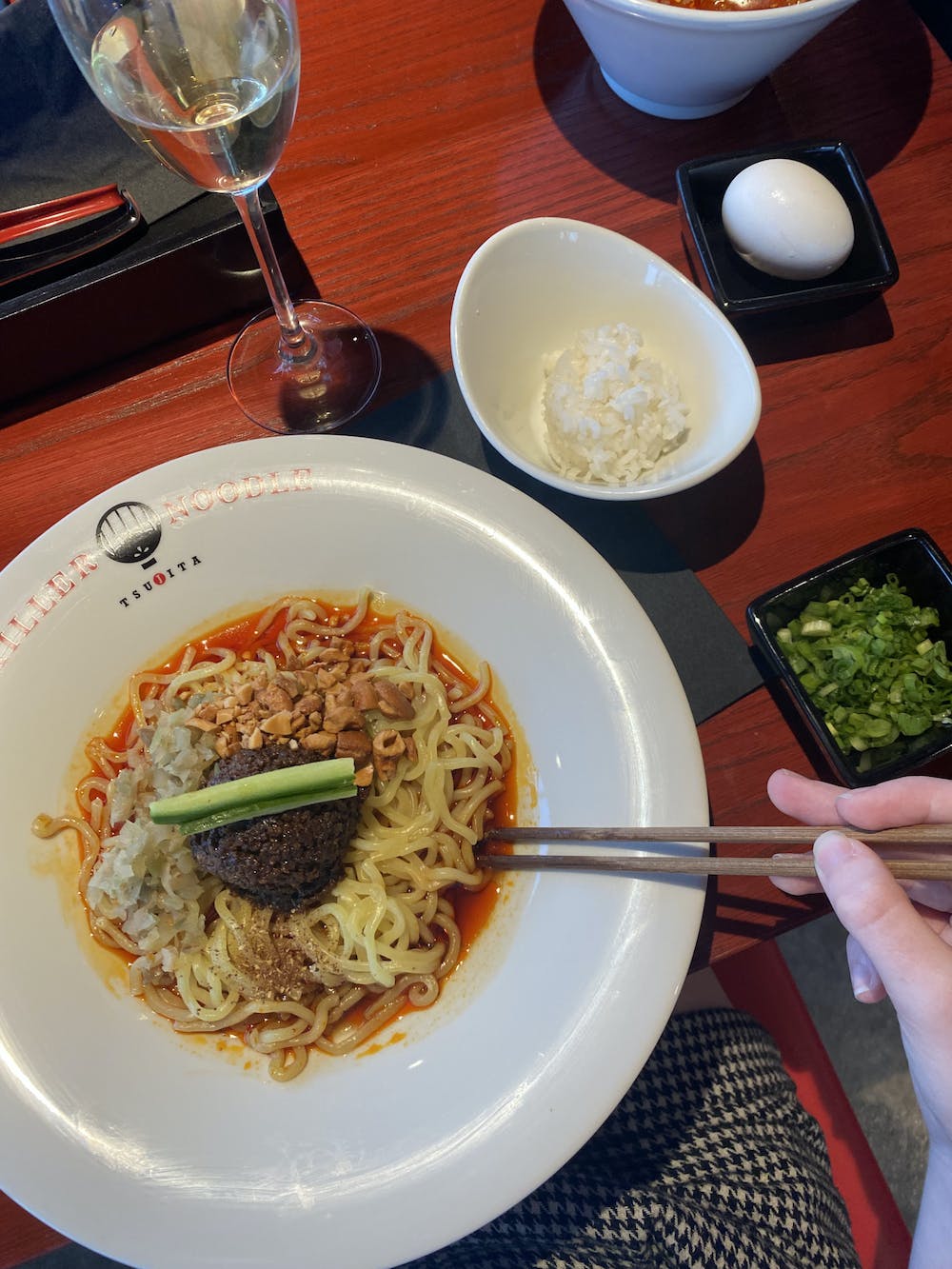 Tokyo-based ramen chain Killer Noodle has made its way to Houston, expanding from its  location in L.A. into the Space City. Touting spicy bowls, Killer Noodles serves tan tan men and spicy Sichuan dan dan noodles, a lighter option than the tonkotsu that most ramen shops in Houston serve. The chain’s California locations have boasted high praise, and the new location in the Heights seems poised to follow suit. With a range of appetizers, three styles of ramen, two options for vegetarian ramen and a list of potential bowl toppings, Killer Noodle is sure to impress even if it falls just short of the lofty expectations it sets for itself.

We were able to attend a pre-opening event for members of the media, and we began the night by sampling several of their appetizers that were not fully identical to the typical menu offerings. For pork bun enthusiasts, we found that the regular and spicy pork buns were some of the best we’ve had in Houston. The fluffy, lightly flavored bun contrasted well with the crunch of the vegetables and the savory flavors of the pork chashu and spicy sauce. The spice was just enough to be prominent without being overwhelming — even someone wary of foods labeled “spicy” would fare well with the dish.

Each of the three styles of ramen — Tokyo, Downtown and Original – can be served with or without soup and have spice levels ranging from no spice to “killer.” I opted for the Downtown style without soup, which has a “tangy and acidic sauce with a vinegar and chili flavor,” at the medium level, which we were told is considered the standard. I found there was a good balance between the spice and acidity — while the vinegar was a prominent flavor, it enhanced the flavor of the chili. Like the pork buns, I would recommend the medium spice level even for those wary of spice. For a menu that revolved around being “spicy,” I found myself disappointed at times when I wasn’t gulping down water at what is considered the standard level of spice.

My roommate, who accompanied me, ordered the mild Tokyo style with soup and topped it with a poached egg. From my stolen bite of her bowl, it was a complex, nutty flavor palate with prominent peanut and sesame flavors. The broth is creamy and rich, and would be a comforting meal on a cold day. My roommate said that the poached egg only added to that sense of creaminess, and the cold created a compelling contrast with the warmth of the broth. She opted for “mild” over “no spice,” but I couldn’t taste even a hint of spice, which led me to believe that the spice levels were lower than the flames adorning their menu suggest. For those looking for a mouth-numbing bowl, definitely opt for the “spicy” or “killer” level.

The portions were large, but with regular bowls ranging from $13.50 to $14 without toppings, this won’t be the cheapest bowl of ramen in Houston. The bowls come with less toppings than visitors may be used to, and extra toppings can add up quickly. Even without adding toppings to my bowl, however, I thought it was a wonderful meal.

All in all, Killer Noodle brings an excellent bowl of ramen different from what most shops in the area offer. For those who can make it out to their new location, it will definitely be worth the visit even if it isn’t the best bowl of ramen for the best price point in Houston, especially for a college student’s budget.