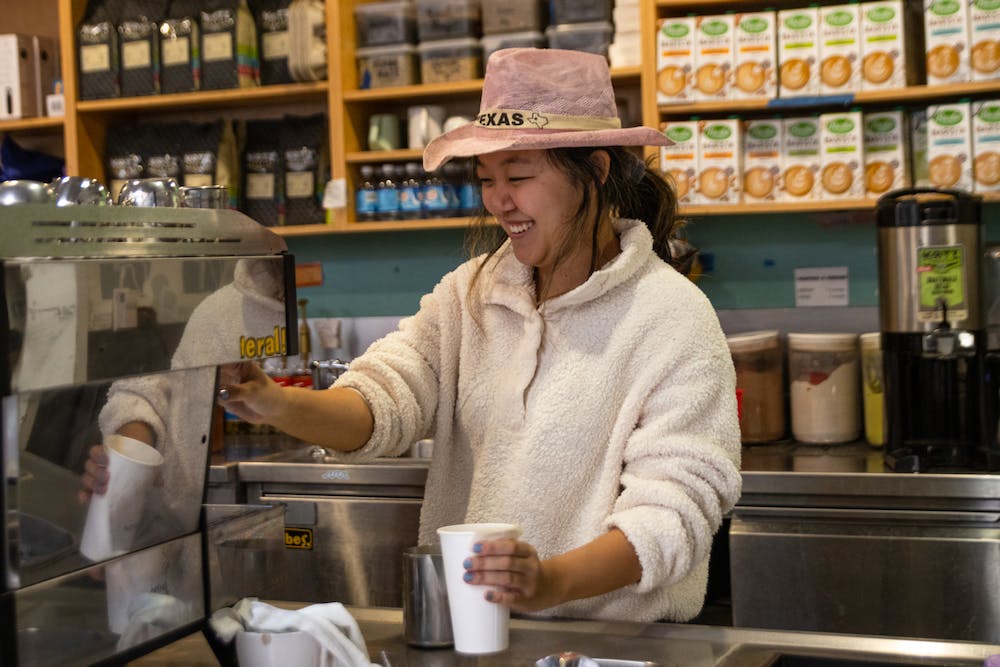 But SRB general managers have responsibilities that go beyond equipment malfunctions and vendor issues. According to Rice Bikes General Manager Diego Casanova, his role as general manager involves creating long-term goals for the business, guiding managers and keeping track of finances.

“If I wanted to divide [general manager responsibilities] into three categories, it would be: long-term direction of the business, guiding and assisting other managers and finances [as] the part that’s exclusive to the GM position,” Casanova, a Martel College senior, said.

Theo Vadot, general manager of The Hoot, said that he acts as a link between administration and The Hoot managers, communicates with vendors and manages in-store emergencies.

“I am the liaison between the administrative side and our manager side,” Vadot, a Jones College senior, said. “I help advise my ordering manager on obligations to our vendors, communicate with vendors alongside my ordering manager, organize meetings, write a lot of emails and if there’s a crisis in store, I pull up.”

Vadot said that he likes the unpredictability of his job.

“One of the things I kind of enjoy, weirdly, is that you never know what’s going to come up at a given time,” Vadot said.

“Emergencies don’t necessarily always directly involve me, but I’m always kept in [the] loop,” Shin, a Martel senior, said. “It can be something as simple as a delivery not showing up … a [Keeper of Coffee] testing positive for COVID … weather emergencies … or the [Rice Memorial Center] construction delay.”

Shin said that time management is her greatest tool when juggling her responsibilities. Often, this may entail creating times dedicated specifically to not thinking about her job.

“I always try to have some flexibility in my schedule so I can address emergencies,” Shin said. “I also have a scheduled block time where I try not to focus on Coffeehouse unless there are emergencies.”

Vadot said that when academics need priority, he turns to the help of his managers.

“As an architecture major, there are times in the semester where I have to be working [on school], and in those moments, I usually delegate [tasks to] my other managers,” Vadot said. “They really help me guide the rest of the employees as a whole. I can always rely on them if I don’t have the time.”

Emma Yang, general manager of East West, said that the role of general manager has little routine. While Yang finds this lack of structure challenging, she said she also appreciates the realism of the job and the contrast it lends to her day-to-day life.

“It’s an unstructured job, being general manager. That is something I warn people about — you aren’t going to have a routine — but in some ways it’s nice for a pre-med Rice student to have this role and go with the flow,” Yang, a Baker College senior, said. “I’m very high-strung, so I want to go by schedule. But that’s not how life works.”

During his work at Rice Bikes, Casanova said that his diagnostic approach to repairs and leadership abilities have prepared him for a career as a physician.

“You have this mental library of knowledge about a certain condition or repair, and you have to apply that with a diagnostic mindset to whatever you’re trying to fix and make a fix that allows that object to be fixed permanently,” Casanova said. “The GM position is [also] super important in the attributes that [being a physician] requires because you need to be a communicator … and know when and how to take and give direction.”

In line with this sentiment, Vadot said that he would recommend joining a student-run business for the learning opportunities the role provides.

“I want to encourage people to apply for positions because SRBs are a fun way to run a business as students,” Vadot said. “When you apply for the manager position, you might not know how anything is going to work, but suddenly you learn so many new things.”

While Casanova enjoys his job, he said that his coworkers at Rice Bikes are what make his experience worthwhile.

“I love bikes, but I also really prefer the people there over the bikes,” Casanova said. “It could be any other job, but really the culture we have and the level of mechanic and type of person we try to hire are people you want to be around.”