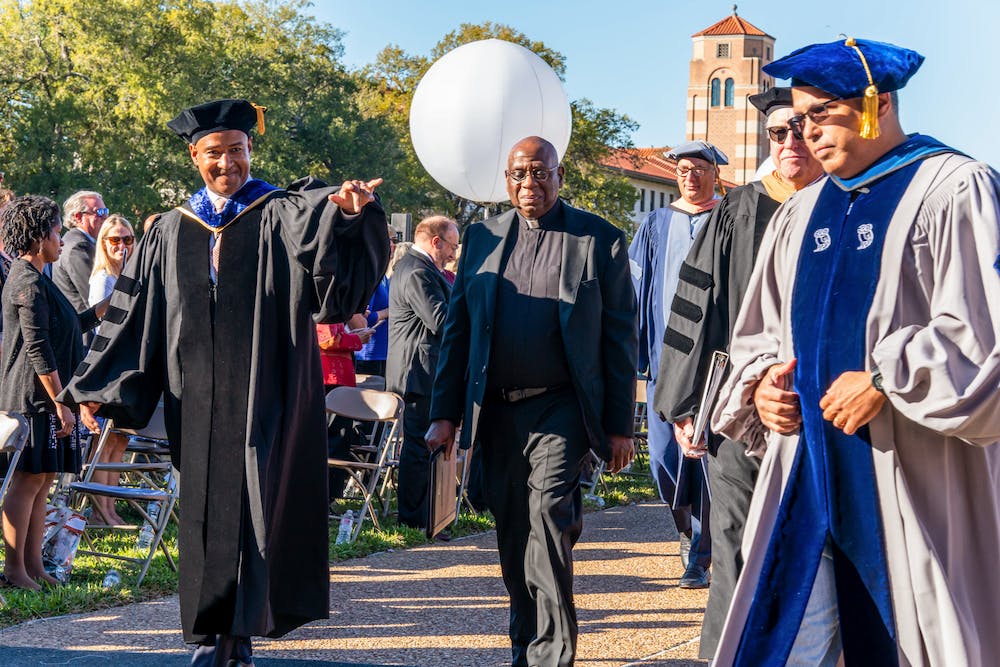 Reginald DesRoches was officially inaugurated as the eighth president of Rice University on Saturday, Oct. 22.

The ceremony, which followed a two-day series of events leading up to the investiture, included student and faculty representatives, in addition to delegates from around 150 universities and organizations.

“The event marks a huge milestone in my career and in my life and the life of my family,” DesRoches said in an email to the Thresher. “It signifies what I have been able to accomplish because of the support so many have given me. It also foreshadows what is to come: opportunity for everyone and an exciting journey that I’m confident will take Rice to the next level.”

After the initial procession, in which undergraduate delegates from all eleven residential colleges, members of the Graduate Student Association and faculty members marched, the ceremony opened with remarks from Robert Ladd, one of the four co-chairs of the Inauguration planning committee.

“This ceremony marks an important and highly anticipated chapter for Rice,” Ladd said at the event. “All of us, the board, our faculty, our students, staff and administration, look forward to continuing and extending the achievements of the university under the leadership of Reginald DesRoches.”

Fred Oswald, another co-chair, said the committee wished to create a ceremony that reflected on the legacy of previous presidents while simultaneously paving a new way forward for DesRoches’ term.

“We definitely thought of how we seek to reflect on the important accomplishments and progress under President Leebron,” Oswald said. “But then we also wish to strike new ground. As we head into this exciting new future under President DesRoches’ leadership, [attendees] see that Rice is not about any one student, or any one faculty member or any one staff member. It’s really about all of us moving forward together.”

“As president, we support your plans to develop Rice as an agent of change in the world through its contribution to knowledge,” Franklin said in her speech, “We know that this president will raise Rice to an institution that all of us can be proud to hail from, regardless of where we come from, what we study here and where we go next.”

These greetings were followed by a performance of Randall Thompson’s “Alleluia” from Rice Chorale and the Shepherd School’s Brass Ensemble. Alex Moreno-Gonzales, another Shepherd student, composed an original piece, titled New Dawn, for the ceremony, which was also played during the ceremony.

Ruth Simmons, a Rice Trustee Emeritus and current president of Prairie View A&M University, was the ceremony’s keynote speaker. In her speech, Simmons spoke to the importance of DesRoches’ inauguration in light of Rice’s legacy, specifically, the founding of the university, including William Marsh Rice’s background as a slave owner.

“I can almost guarantee that few days will pass when [DesRoches] does not reflect upon the irony of a person of his background carrying on William Marsh Rice’s legacy,” Simmons said. “His appointment proves once again that whatever the limitations of our vision in our time, future generations can never be permanently bound by them.”

After Simmons’ speech, DesRoches formally donned the presidential robes and was proclaimed the university president before taking the stage. In his first official presidential address, DesRoches talked about his vision for his tenure, including Rice’s academic and social expansion while remaining true to the university’s message of excellence.

“While our ambitions require us to evolve, there is one thing that cannot change, and that is the unique culture of care we have at Rice,” DesRoches said in his address. “The way we treat people with respect and dignity is paramount. We must remain a place where people never forget that at Rice they felt loved, welcomed and special as they received an unequaled education that enabled them to transform their own lives and the world around them.”