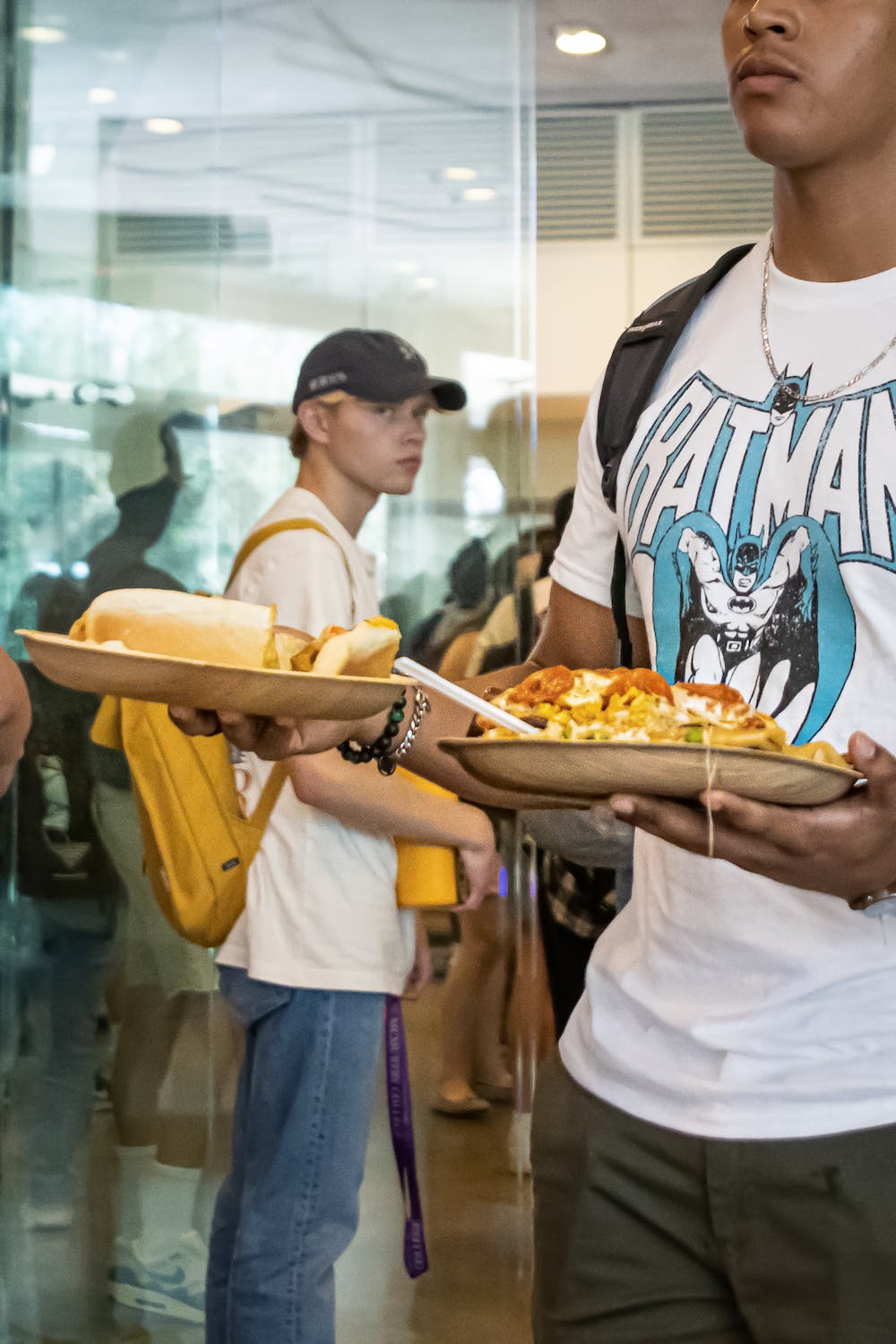 Editor’s note: A student interviewed was given the option of remaining anonymous in the interest of keeping their experiences private. The anonymous student was given a false name, which has been marked with an asterix on first mention.

Starting this semester, Rice Housing and Dining implemented significant changes to their dining policies, including an additional meal period, additional 25 meal swipes for the full meal plan and a required additional swipe for any entree plates after the first entry, without any changes to the price of the meal plan beyond what was previously budgeted for the 2022-2023 academic year. These changes were cited as being in response to the Student Association Resolution to Structurally Address Disordered Eating Patterns in the Rice Community. However, differing opinions exist about whether the changes address the concerns that prompted them.

The SA Resolution to Structurally Address Disordered Eating was introduced by Sarah Bartos, Skye Fredericks and Morike Ayodeji, who were all SA senators at the time. The resolution calls for H&D to provide food outside of servery hours and to provide more flexible meal plan options for students with underlying food-related issues.

According to David McDonald, senior director of H&D, the additional meal period is scheduled from 2 p.m. to 4 p.m. Monday through Friday.

“The fourth meal period is designed to accommodate students that will have difficulty eating during the scheduled lunch hours due to class conflicts or otherwise would like to eat another meal or have snack items for later,” McDonald wrote in a statement.

Bartos, a Lovett College junior and current SA secretary, said that while she applauds H&D for the work involved in providing food for campus, she feels that the requirement for students to swipe for more plates after the first entry is contrary to the goals of the resolution.

“Part of the way that they’re branding [the new policy] is to say that it addresses [the SA resolution] when it really doesn’t,” Bartos said. “I think that’s great [for H&D] to try to work with student leadership and say that they support the things that we did, but I feel like it’s also important to listen to the students and the reasons behind making that.”

When she received the announcement during the summer, Bartos said that she was initially excited to see that the meal plan was altered, but that changed when she realized the details of the new plan.

“[As] someone who wrote the resolution, [the changes to the meal plan] made me really sad because I don’t want to be the reason that some people can’t go back into the servery,” Bartos said. “For a while, I felt a lot of guilt about it.”

According to Bartos, the core of the SA resolution was additional flexibility in dining options. She said that while the additional meal period helps with that goal, she doesn’t believe the changes overall are in service of that and said that this is only the beginning of working towards necessary changes.

“Get involved with your college government as well as the Student Association to try to fix [issues related to disordered eating],” Bartos said. “I think this is just a first step. It might not be a step completely in the right direction, but I think it shows that they’re willing to make changes.

“With disordered eating, it is very complex, and there’s lots of layers on it,” McDonald said. “It’s really difficult for us to accommodate every possible criteria involved in disordered eating, so the one we were focusing on the most is the one where students want to eat multiple times during the day.”

According to McDonald, H&D does not claim to completely address the SA resolution.

“We’re not claiming that we can just solve disordered eating ... but we’re trying to chip away at it little by little in response to the SA Resolution,” McDonald said. “We agree with [the resolution], but it’s very difficult when you’re looking at an international population, lots of different restrictions and dietary needs and serving 10,000 meals a day. A one-size-fits-all can be a very difficult model, but we tried to do that.”

Charlie Mendes, a Brown College senior, said that he and his friends have struggled with under or overeating because of the changes to the swipe system.

“I’ve had lunch every day this week, and I’ve either left [the meal] too hungry or having to throw out a bunch of food because … I didn’t gauge my hunger well enough,” Mendes said.

“I think one misconception that a lot of people have about eating disorders is that it’s like a weight loss thing … but it really is a control thing. So anything that mitigates my feeling that I have control over my body exacerbates [disordered eating] behaviors,” Ellen said. “I think the new meal plan did that a bit.”

Due to the physical effects of eating disorders that remain throughout and after recovery, Ellen said that she struggles with digestive and health issues. To mitigate that, she said that in the past she would get small quantities of several foods before returning into the servery for an additional plate once she tested how she would react to those foods.

“I can’t really do that anymore. What I do instead is I kind of get the variety but large quantities. I think that that’s a huge waste because that’s more food than I want to eat,” Ellen said. “So I either throw it out and feel guilty about that afterward, which is never good for eating disorder behaviors, or I eat all of it and then feel guilty because I ate all of it. Then I’ll usually just skip a couple of meals … I feel like it encourages a binging and then restrictive cycle.”

Ellen said that confusion about how the system works has also made this more difficult. However, she said that she supports “Munch,” the additional meal period added this semester, which she said makes it easier for students with conflicts either during lunch or dinner periods to get food.

In an attempt to clarify confusion, McDonald said that while students have to swipe into the servery to receive additional entree plates, after their initial swipe they can return for smaller plates as well as drinks.

SA President Gabby Franklin said that the new plan does the best it can to provide better options to students while balancing other concerns such as inflation and the supply chain.

“There are a lot of factors at play here … They’ve done their best to provide consistent food throughout the day [and] provide extra meals for students not only on campus, but off campus [students] who rely on their friends to get regular meals,” Franklin, a junior at Brown, said. “On top of that they’ve done their best to preserve and increase the number of [food] options available.”

Charlie Cruz, a McMurtry College sophomore who lives off campus, said that he has utilized the new swipe system’s ability to be swiped into the servery by other students, especially with the ability to use swipes that they didn’t utilize for breakfast or other meals.

“If I ever needed [to be swiped into the servery] … people have been really nice about swiping in,” Cruz said.

At times, Cruz said that other students have given him the second plate available when they swiped into the servery.

“Because apparently you get two plates … for one swipe, [other students] just give you the extra plate and kind of carry on our day there,” Cruz said. “Admittedly, it makes it a bit kind of embarrassing having to ask [to be swiped into the servery], but [the system] works.”

H&D also clarified that, to combat fraud, students can no longer swipe into serveries when they forget their student ID by giving their identification numbers. According to McDonald, this is the result of stricter adherence to requiring students to swipe their ID for entrance, which has always been the official policy.

While some students have requested extensions to dinner hours, McDonald said that extending servery hours later into the evening or night presents staffing concerns. However, H&D is still looking at options for additional servery hours, he said.

“[Extending dinner] is a little bit more difficult to resolve,” McDonald said. “There’s a couple of things going on there. The first part of this is that not all of our staff drive. They use public transportation, when Houston transportation turns off at 10 o’clock, and nine o’clock in some cases … It becomes kind of a safety [concern] for folks to be walking home at night.”

Franklin said that she encourages students to be patient as campus adjusts to the new meal plan.

“Please know that you should give the plan as much grace as possible,” Franklin said. “It’s been implemented this year. It will be in place for at least four to seven years … There’s a lot of questions, and if everyone could give it a chance, read through all the documentation and ask questions to their representatives. That would be wonderful.”