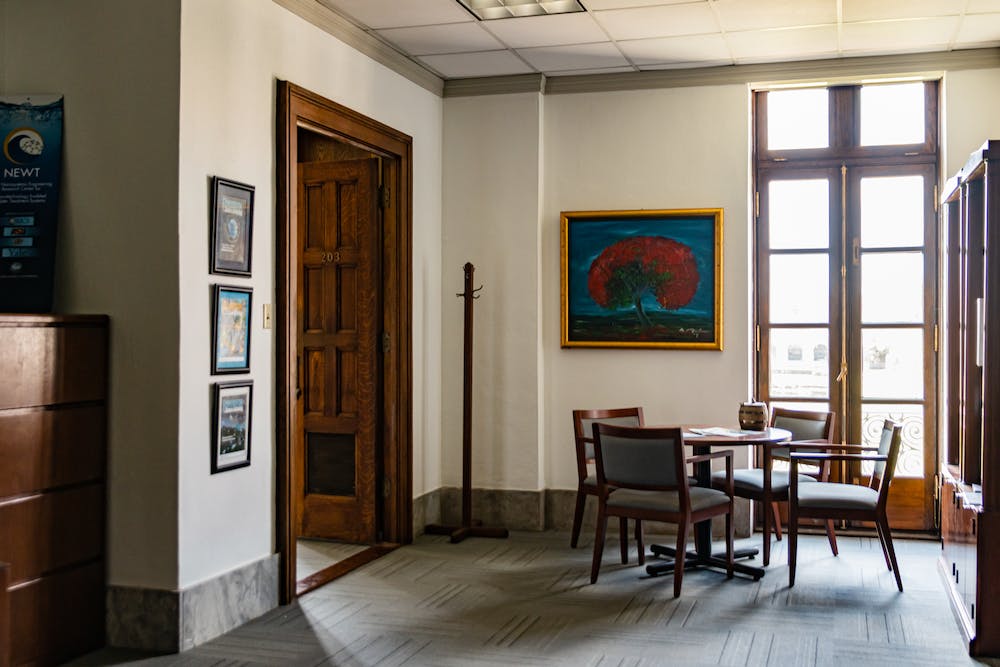 For some, it is all too easy to take fresh water for granted. However, in many parts of the United States and the world, clean water is a commodity. Dozens of labs and organizations are working to solve this problem, including the Nanotechnology Enabled Water Treatment Center on Rice’s campus.

The NEWT Center is an engineering research center that aims to advance global water-treatment technologies. Other universities — Arizona State University, University of Texas at El Paso and Yale University — are also involved with NEWT. Dr. Rafael Verduzco, a Rice professor and researcher at NEWT, said that the connections between these universities are an important part of the center.

“NEWT has brought me in contact with so many other people,” said Verduzco. “I’ve learned a lot, and I think Rice as a whole has benefited a lot from NEWT – from the people it has brought in and the work that has been accomplished in the center.”

According to Verduzco, NEWT research has a particular importance in water treatment in low-income communities.

“I think where NEWT can really make an impact is in certain locations that are off the grid or in not very developed areas, where you need a compact, portable, low-power water treatment system,” Verduzco said. “NEWT has really emphasized these types of technologies.”

Research at NEWT is organized into five groups which collaborate on technology development. The first group is called Thrust1 or Multifunctional Nanomaterials, and it focuses on creating chemical structures that can break down toxic molecules and viruses in water. Dr. Michael Wong, a Rice professor and chair of the chemical and biomolecular engineering department, said he conducts much of his research in this group.

“The chemical engineering problem I want to solve is to figure out how to make chemical reactions more sustainable, more CO2 friendly, more energy-friendly and more raw-materials friendly,” Wong said.

According to Wong, NEWT has been instrumental in spurring water treatment research.

“If NEWT did not exist, I would still be doing this research, but the progress of the research would be ten times slower,” Wong said. “So the NEWT center has really catalyzed our efforts – not just in my group, but in other people’s groups.”

Within Wong’s lab, several groups of researchers have collaborated with NEWT to pursue nanotechnology-based water treatment solutions. Bo Wang, a Rice graduate student who works in Wong’s lab, said that NEWT’s emphasis on academic collaboration has been helpful to his research.

“Normally, when you first start doing research, it’s hard to do all these things on your own,” Wang said. “But NEWT is a research center combining four universities, so you can collaborate with students outside of your university and research group.”

Emily Aspey, a Martel College sophomore who worked with Wang, said that while the lab’s research is promising, it is far from complete.

“[Wang’s] paper currently focuses on PFOA, which is a certain type of PFA [a chemical that does not break down naturally], and most of our research has revolved around PFOA,” Aspey said. “But [we have] to destroy all PFAs. PFAs are a wide range of compounds that contain many different types. A lot are more difficult to destroy than others and more difficult to detect. So we need stronger instrumentation to test these different compounds and to test them in smaller concentrations as well. Current research is focusing on trying to widen the array of compounds [we can destroy].”

Despite the lab’s need for further resources, Aspey said that working with NEWT has been a great experience.

“[NEWT] does very important work,” Aspey said. “It’s a great way to get involved with research on campus. I’m excited to continue working with the group and see how our project progresses.”

The second research group at NEWT is called Thrust2 or Nanophotonics Enhanced Water Purification. This group aims to reduce the electricity required for water treatment by creating nanomaterials that can capture heat and convert it to energy. Verduzco’s research focuses on reducing the cost of water treatment by developing materials that can remove or destroy water contaminants using solar power.

“We're trying to develop absorbents that bind to [nitrates],” Verduzco said. “Then some sunlight or some external light sources will provide the energy to degrade these contaminants. So we hope we can have something that’s practical and low-cost that can be used to treat drinking water in multiple sites.”

The third research group at NEWT is called Thrust3 or Scaling and Fouling Control. In scaling, certain contaminants can build up on pipes and hamper water access and treatment. Thrust3 works to reduce scaling by removing these contaminants prior to treatment and creating anti-scaling membranes for use during treatment. Njideka (Syndi) Nnorom, a Rice graduate student, has done much of her research in this group.

According to Nnorom, NEWT’s mission of water treatment is vital on both a local and global scale.

“There’s a lot of water issues that we have just within the United States, not even considering around the world,” said Nnorom. “So the fact that NEWT focuses on creating different technologies and methods to help with that – either for drinking water or repurposing minerals and ions – for maintaining the world as it is now, I think it has a really great relevance.”

Outside of research, NEWT also has two educational programs for K-12 teachers. The first of these programs, NanoEnvironmental Engineering for Teachers, is a semester-long virtual course for AP Environmental Science, Environmental Systems and Biology teachers. The second program, the NEWT Research Experience for Teachers, is a year-long internship program for STEM teachers. Christina Alston, the program lead for NEET and NEWT RET, said that she is optimistic about the accomplishments and future of the NEWT education programs.

“I think that we’ve made some tremendous progress,” said Alston. “I think by the end of [the RET program] we’re going to have a complete curriculum that aligns to all of the K-12 spaces. As far as the NEET course, we have fully created the program and we have facilitators at pretty much every institution.”

With all of NEWT’s educational programs and research efforts, Wong said his reasoning for working with NEWT was quite simple.

“I want to get clean water in front of more people around the world in a cheaper, safer fashion,” said Wong.