Rice is not your average school. We don’t want an average band. 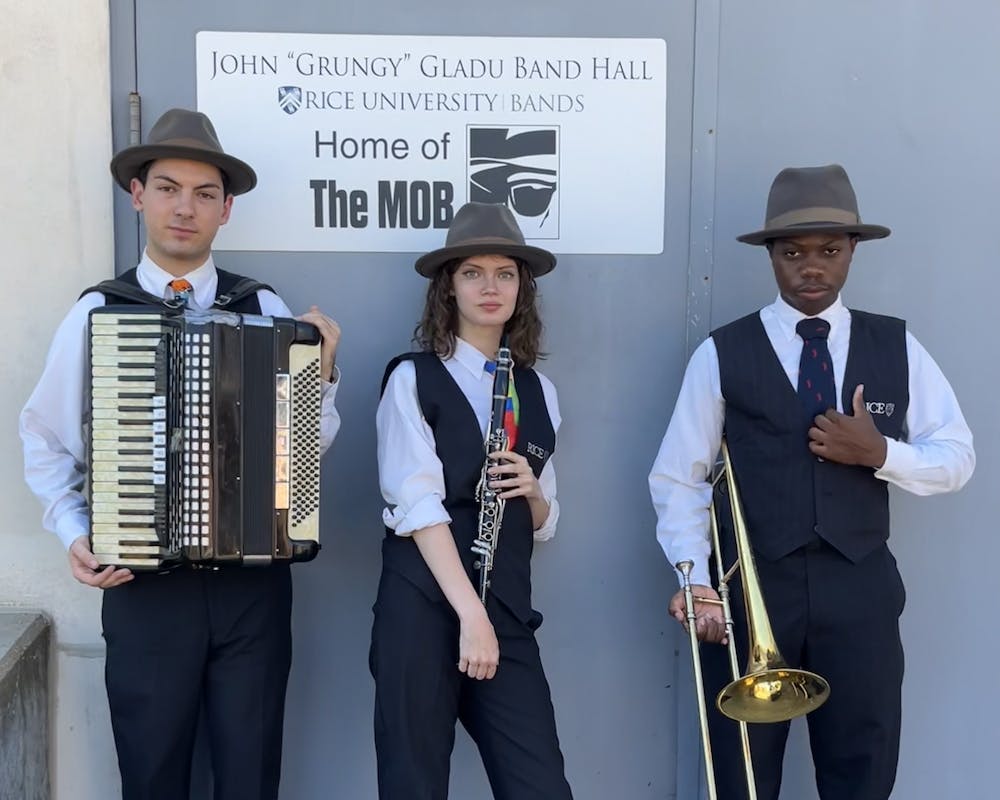 Starting this season, Rice’s Marching Owl Band, longtime instigators of musical shenanigans at various Rice sporting events, will no longer play at basketball games — a role the university intends to fill with the traditional-instruments-only, student-only, audition-only, near-perfect attendance-required Owl Pep Band. To the three of us, this is a slap in the face to everything the MOB, and indeed Rice, stand for.

According to Rice Athletics, our removal and replacement is an improvement as Rice moves to a better conference, and they say a conventional band will attract and animate crowds to improve the home advantage our basketball teams enjoy at Tudor Fieldhouse. To us, this means the MOB, and the quirky side of Rice that we represent better than anything else, is unwelcome in Rice’s cold, corporate public image as it seems to reject the “unconventional wisdom” it uses as a selling point. For decades, the MOB’s incarnation as the Basketball Owl Band has performed at dozens of basketball games each season, lead crowd chants, and put on comedic half-time shows. If waving our cutouts of memes while wearing Aloha shirts can’t attract the crowds Athletics is looking for, then a run-of-the-mill pep band, with no energy to give outside of their stand tunes, will fail.

String and miscellaneous instruments obviously don’t fit that insipid sameness of nearly every other basketball band that Athletics wants to copy. Violins are hardly even audible over percussion and wind instruments, so Athletics must think the mere sight of unexpected instruments risks frightening off attendees. But James, the MOB’s accordionist, can readily affirm the opposite: He and fellow members of the Stringatronics section, like our cellist and ukulelist, bring a wow factor that nothing can come close to replicating. Upon introducing himself and mentioning he plays accordion in the MOB, people have frequently responded with admiration: “You’re the accordionist? I’ve seen you! That’s so cool!” Athletics doesn’t grasp what would be ruined by excising this instrumentation. Alumni and community members are excluded, purportedly because it would be too complicated to pay them, but this easily remedied obstacle is a poor excuse.

To Kaitlyn, a clarinetist, the MOB has been an accessible alternative to the traditional college marching band experience — a way to unwind a few times a week with friends, and without the pressure of mandatory rehearsals or games. Rice students are perpetually busy, because even outside of heavy course loads, so many of us devote our free time to more than just one passion. In the fifty years since Rice’s marching band was reborn as the MOB, it has scattered instead of marched, and welcomed members regardless of their musical prowess or ability to show up consistently. This structure acknowledges the reality of life at Rice, and for decades has given Rice a more comprehensive band than it may have had otherwise. We’re skeptical that the Owl Pep Band can fill its roster from the talent pool to which it’s restricted. MOBsters devote countless hours throughout basketball season because they get to do it with their friends amid an invigorating atmosphere. The offer of money can’t get students to audition and commit to 30 games in that same way.

Ryan would have conducted the BOB as its drum minor but is eligible to audition for the new pep band as a trombonist. To him, being stripped of such a privilege while being asked to join this new band is insulting. The stated motivations behind this band don’t come close to justifying the disregard and ungratefulness shown to so many MOBsters, who sacrificed their time for no compensation. Rather than lend the MOB a modicum of support, Athletics would demolish a vibrant instance of campus life and spend thousands of dollars per week on a substitute with embarrassingly little thought put into it. We doubt throwing money in such a manner at what is ultimately a sideshow attraction will earn them back that investment.

This decision disturbingly echoes Rice’s sale of KTRU in 2010, which also happened without consulting its members. Both undermine student autonomy and Rice’s connection to its alumni and wider community. Despite the assurances we’ve been given, we can see a simple answer to the inevitable next question: If the BOB doesn’t fit the university’s image for its new conference, how does the MOB at all? We call on Rice Athletics to reinstate the Basketball Owl Band — and to motivate this, for student musicians to join us in boycotting the Owl Pep Band.