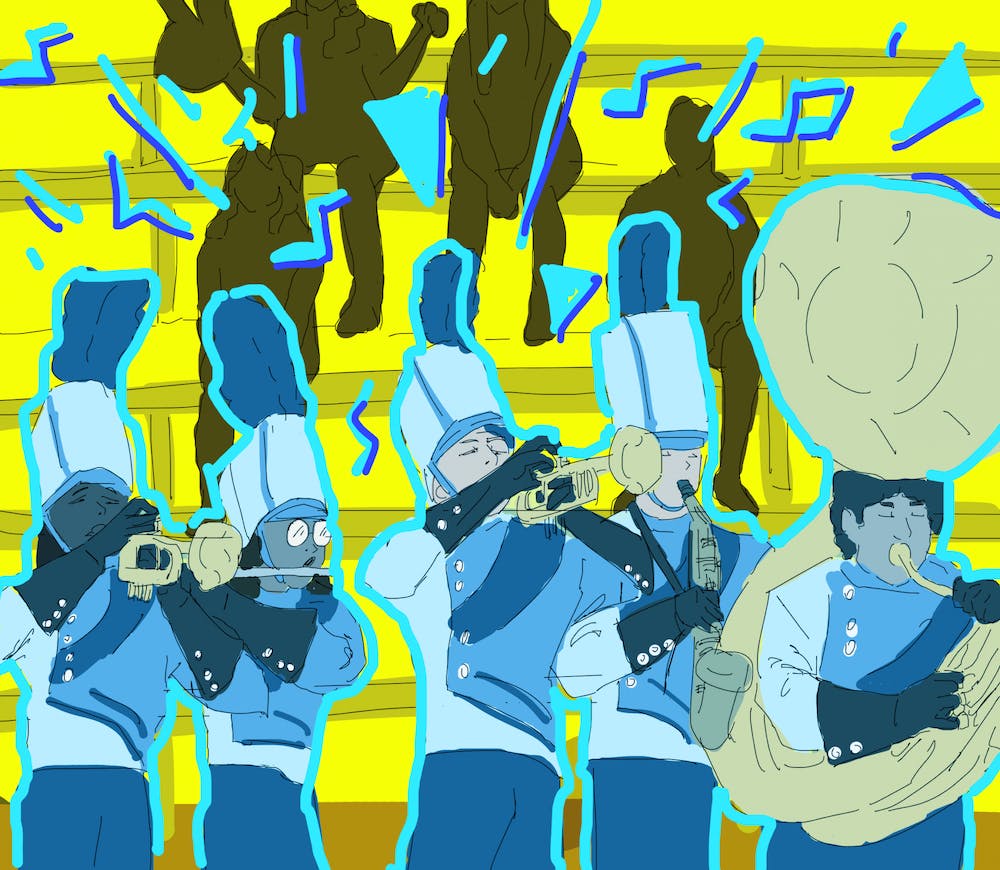 The decision was prompted by Rice’s move to the American Athletic Conference, which Mello said caused the athletic department to reconsider the kind of atmosphere they wanted to create at basketball games. The MOB, Rice’s long-time unconventional marching band, will continue to play the tribute to the armed forces and the halftime show at Rice football games, Mello said.

“To think that football and the MOB won’t always be aligned … is a non starter,” Mello said. “There has never ever been any decision or discussion about the MOB not performing at our football games.”

Charles Throckmorton, the director of bands who has led the MOB since 2002, will help oversee the new pep band with Roy Park, a graduate student at the Shepherd School of Music, taking the lead as the band’s conductor.

The new band will consist of only brass and percussion instruments, which some members of the MOB said will exclude students who play other instruments. The MOB’s website lists sections for strings/electronics, woodwinds, brass and percussion, and it says that all instruments are welcome. According to Throckmorton, he understands the decision but wishes Rice Athletics had prioritized including all of the school’s musicians.

“I can empathize,” Throckmorton said. “People, in my opinion, are more important than things. So if I was making a decision, I wouldn’t exclude anybody, but that was the decision that was made.”

The decision also leaves the MOB, which currently performs at basketball, football and occasionally volleyball games, without games to play once football season ends. Some student members of the MOB said they were surprised and angered by athletics’ decision.

“This is an affront to me and everyone else who will lose their opportunity to play at games in the spring,” Rijuta Vallishayee, the MOB’s drum major, wrote in an email to the Thresher. “The fact that Rice Athletics expects MOBsters to participate in this band is frankly ridiculous. I look forward to performing with The MOB at other venues in the spring and making music performance accessible to all, regardless of Rice Athletics.”

Throckmorton said he understands his band members’ concerns but that they’ll have to learn to live with the new format.

“Those who have spent, you know, two, three, four years doing this, to then be told that nope, we’re changing, we’re changing everything, I empathize with that [anger],” Throckmorton said. “I think that, like any community that goes through a period of change, that they’ll find what they can take from it and then move ahead.”

The introduction of the new pep band is part of Rice athletics’ series of adjustments before joining the AAC next year, according to Mello.

“As we kind of looked at going into the American [Athletic Conference] and some of the improvements we wanted to make, from the stadium and other things, one of the things we wanted was a more traditional pep band,” he said.

Mello said the band members will be paid to ensure commitment throughout the entirety of Rice’s sports seasons, not just when classes are in session.

Ethan Goore, an equipment manager and game producer for the MOB, said he thinks the MOB could have adjusted to fit Athletics’ wishes.

“I see no reason why there has to be a completely new band,” Goore, a Duncan College sophomore, said. “Athletics could have given us suggestions on what they wanted from us, but they just decided to replace us instead without warning.”

Connie Huang, the MOB’s events manager, said she doesn’t plan on auditioning for the pep band.

“The MOB will remain a home to those of us who need it,” Huang, a sophomore at Wiess College, said. “We will continue to do what we do, because we love what we do. Music is too important for it to be any other way.”

Throckmorton said that the MOB scheduled more performances during the spring of 2021 than they would in a typical year, despite the pandemic keeping them out of Tudor Fieldhouse.

“We’ve performed for the kite festival in Hermann Park, we’ve performed for Rally Club lunch, just for fun,” he said. “During COVID we just did a parade around the inner loop to cheer people up on a day without classes, just things that people want to do.”

While the new band will be more traditional than the MOB, Throckmorton said he hopes it still follows his personal mantra.

“People are more important than things, and music is too important and too much fun to let professionals and serious people handle it,” Throckmorton said.