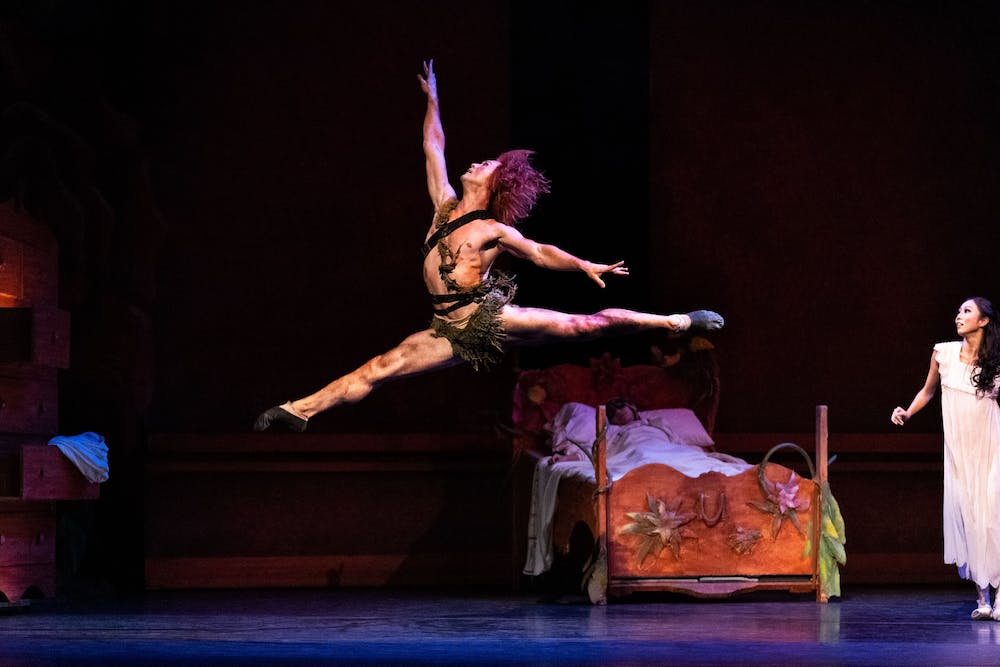 Neverland has never been so magical. The last time choreographer Trey McIntyre’s “Peter Pan” appeared at the Wortham Theater Center for the Houston Ballet was ten years ago during the 2012-2013 season. This season, the show returned from Sept. 9 to Sept. 18 in full fashion, featuring fairies, flying flips and fantastical sets.

One of the most exceptional production elements was the flying, which was present throughout the show. Peter Pan (Simone Acri) soars through the stage not by the momentum of his pirouettes, but rather thanks to steel wires and harnesses. The stage lighting is cleverly altered for each flying scene by the Ballet’s Production Team to create the illusion of flight and to hide the steel cables. Peter Pan teaching Wendy (Kellen Hornbuckle) how to fly is one of the highlights of the show. Both dancers’ movements beautifully express their hesitancy and enjoyment during their flight, and it’s a touching glimpse into the sweet connection between the two characters.

Thomas Boyd’s set design is another standout. Throughout the three acts, the set models are changed to reflect the story’s tone through color, shape and shadow. In Act I, the Darling nursery is brightened with flowers and floating door frames. Vivid reds and deep blues paint the scene of the mermaid lagoon in Act II, and the shadowy, menacing setup in the final act is completed by Captain Hook’s pirate ship. The set’s moving pieces are also well done — the automated crocodile even makes a few  appearances slithering through the stage.

Initially, I was skeptical of the dancers’ ability to convey their characters’ depth solely through dance. Some scenes are more intuitive, and others, like the mermaid creatures’ dance sequence, are unnecessarily drawn out. Again, Peter Pan and Wendy’s connection and individual quirks are well-executed — for instance, when Peter Pan endearingly falls to the floor after Wendy kisses his cheek. Captain Hook (Connor Walsh) is appropriately scary in demeanor and movement, Tinker Bell (Allison Miller) twinkles with her typical charm, and the Lost Boys shuffle around like the unkempt misfits that they are, somehow succeeding in balancing their roughness with the grace demanded by ballet.

My biggest point of contention was the beasts’ dance scene, which is also unnecessarily drawn out somewhere in Act II. The beasts hopped around in Truffula tree-like costumes that, while colorful and probably fun for younger viewers, were too ambiguous to clue me into their role in the show. For all other parts of the production, viewers who were faintly familiar with the story of “Peter Pan” could reasonably follow along, but this scene was confusing and didn’t add anything to the larger storyline except runtime.

All in all, “Peter Pan” is a well-executed production made all the more appealing by its gorgeous flying scenes, thoughtful set design and the undeniable talents of its dancers. If they follow in Peter Pan’s demi-pointe, the Ballet’s upcoming shows this season are sure to be a treat.