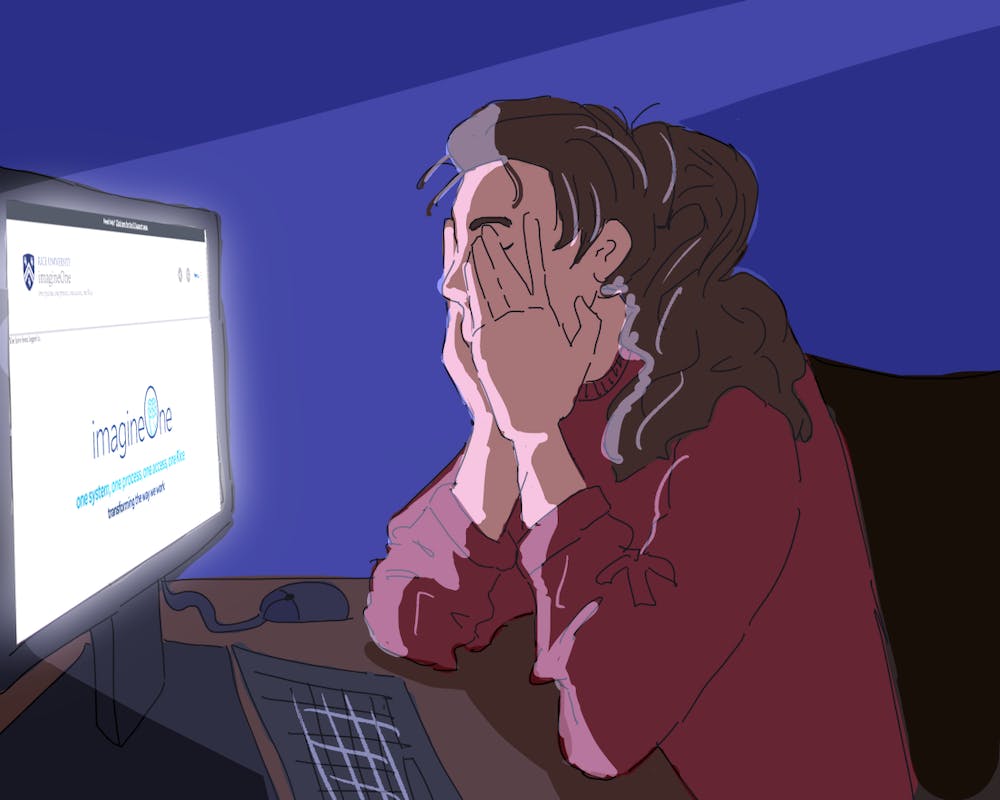 Student-run businesses, organizations, graduate students and faculty are among those who continue to experience ongoing struggles with Rice’s transition to ImagineOne, a payment system that replaced Banner last year.

In a system rollout that former president David Leebron described as “terrible” at faculty senate last October, iO caused many issues such as delayed payments, inaccessibility to grant money and inability to track spending and funds.

Paul Padley, vice president for IT and chief information officer, said that the iO project is a redesign of many of the business processes that the university uses, and that any change that significant is going to have problems along the way. Many improvements to the system have been implemented since its introduction last year, according to Padley.

“It’s a process of continuous improvement and adjustment ... That’s the way modern software works,” Padley wrote in an email to the Thresher. “Just like your phone receives regular updates and new capabilities, the software behind [iO] is being continuously updated with new and improved features.”

Jinhee Shin, the general manager of Rice Coffeehouse, said that the transition to iO last year was a very difficult process.

“There were a huge host of problems that came with [iO],” Shin, who worked as Coffeehouse’s finance manager last year, said. “I could not see the budget and how much money was going in and out of our account, and I didn’t know how to do credit card deposits or cash deposits properly because the spreadsheet for that was different from what I had been used to. The way we do interdepartmental transfers was also really hard … I felt like I was relearning my job.”

Shin, a Martel College senior, said many problems continued all throughout her term as finance manager and are still ongoing today. For example, Coffeehouse is still without a fully accurate budget tracker, she said.

Chidimma Alilonu, Coffeehouse’s current finance manager, said that many things relating to the operations of student-run businesses now need to be approved by staff since the transition to iO.

“It’s tough to get approval for certain things through iO because we’re students, and faculty who do that approval, who work in payroll and on the finance side, [sometimes] don’t recognize us as adults and entities that should be getting approval for things,” Alilonu, a Wiess College senior, said. “It’s understandable, I would say … but it makes things take a lot longer, and it just impacts our business.”

According to Alilonu, there are many other iO-related issues that Coffeehouse still faces, including their finance dashboard being so outdated that their monthly credit card sales do not show up in the system until up to two months later.

“That’s problematic because it doesn’t allow us to do proper accounting on our end,” Alilonu said. “My advisor told me to set up a 30-minute call with someone, and they helped me make it more streamlined for Coffeehouse’s needs … But it still doesn’t really fix the issue.”

Shin said that one concern that did get improved last year is employees can now adjust their own time sheets. However, Shin believes it was only a very minor problem among more urgent issues.

“I think just looking at that does not solve the bigger issue,” Shin said. “I wish there was a more direct iO point of contact for everyone in general, especially for [student-run businesses], because our needs are so specific.”

Shin said that for the past year, Caitlin Lindsay, associate director for student-run businesses, helped her reach out to the people she needed to contact.

“[Lindsay] was super helpful … but I also think that the [administration] should have done a better job reaching out to us,” Shin said. “I definitely felt like we were not getting the support we needed at that time … If we have someone that we can [directly] point our problems to, it would be very helpful because I feel like I’m always just directed to many different departments.”

Lindsay said that few departments would see students requiring access to the financial dashboard or time card approval, and student-run business managers’ interaction with both of these pieces adds a layer of complexity to their work.

“It can take a while for access to be provided, as the institution, understandably, needs to ensure people only have access to what is needed,” Lindsay said. “However, this can cause a delay in managers being able to access needed information, tools, etc. I give a lot of credit to our [student-run businesses] for their patience and willingness to adapt.”

Mario Escobar, a Ph.D. candidate from the biosciences department, said that there are also increased restrictions for graduate students due to the iO system.

“Whenever we talk about purchasing, or reimbursements or any sort of getting materials for our research, it’s been pretty complicated,” Escobar said. “From my standpoint, it seems like the administration wasn’t even aware that students seemed to have those permissions [before iO].”

Escobar said that even though many graduate students have found roundabout ways to get access to these permissions, the iO system makes their jobs more complicated and frustrating than before.

“The selling point [for iO] was that it was supposed to make things better,” Escobar said. “But now, if in my department, someone makes a purchase, we have to fill out a PDF sheet that contains all the items that we’re going to hold, the item that we’re going to order, the catalog number, any specific details. Then we send a screenshot of the cost of the item in a cart, and then send that to our purchasing department, so that they go ahead and fulfill the iO cart and submission process.”

David Messmer, director of the First Year Writing Program at Rice, said that iO issues persist for graduate students who become Rice employees. In general, however, Messmer said he believes the iO situation is in a better place than a year ago, but it still has a long way to go.

“One of the things that I know we’ve encountered is, when people make the transition from graduate students into an employee, there have been a lot of [issues] that we’ve run into [including] having trouble getting benefits, getting pay and losing access to the library,” Messmer said. “It seems like the system doesn’t quite understand the idea of the same individual taking on a completely different role.”

Escobar said that the iO system also gravely complicated things such as filing for taxes for graduate students in fellowships.

“A lot of the students don’t get coded in the [iO] system as employees. Rather, they get quoted as contractors, which means that their taxes aren’t taken out from their paycheck, and they are given different tax brackets depending on what they make,” Escobar said. “Before iO, the distinction didn’t really matter because Rice already took off the taxes for any graduate student who was getting paid.”

According to Escobar, the confusion around taxes was especially difficult for some of the international students.

“Because, on top of handling immigration, you now have the risk of ‘well, if I’m not being considered an employee, and I’m being considered a contractor,’ that in a lot of students’ minds was a violation of visa requirements,” Escobar said. “It brought a lot of confusion and panic to [international] students.”

Escobar said that there have been a lot of voices from the graduate students asking for more support. Unfortunately, a lot of the responsibility was left either to the department level or to the individual level, and there wasn’t any action towards individualized help.

“Some departments were able to help with guidance for their students on what to do and how to process these new payments, but other departments weren’t able to do that,” Escoar said. “It’s such a big undertaking for us individual students to get professional help [for taxing]. To my knowledge, there wasn’t any sort of event or any sort of aid in that aspect.”

According to Messmer, what should have been better last year from the very beginning was figuring out how to have workarounds when the system does fail.

“I understand you have a new system, it messes some things up,” Messmer said. “[But] what happened a little bit too much was a kind of, ‘Well, we’ll fix it and you’ll get paid the next paycheck,’ which … could be two weeks or more. So I think that the important thing is to have a system in place to deal with as you are working on fixing all those problems, having something in place to work around the system if that’s what needs to happen.”

Messmer said that he believes iO has all the markings of a system that was not designed with the university in mind, but rather something much more corporate.

“In a corporation, there’s a very clear hierarchy, and everyone’s an employee,” Messmer said. “And so the idea that people hold multiple roles, and in those roles things are very fluid, is something not baked into the design. So they’re having to kind of figure that out on the fly.”

Shin, on the other hand, said that she thinks iO would have worked better for a school that doesn’t have that many students and employees in charge of the financial and personnel back ends.

“Having hundreds of people have access to [iO] and not really have the tools they need to fully utilize that in a year-round position makes it very difficult for [iO] to be effective,” Shin said.