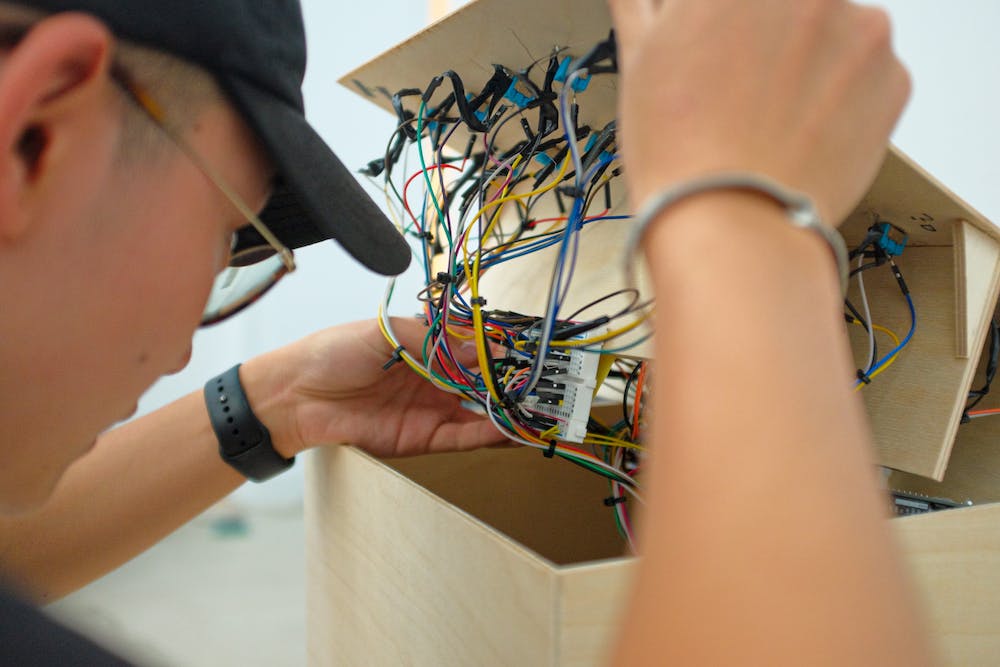 The project began when the group won $1000 at last year’s Archi-Arts competition.

“We wanted to create something that reflected the idea of the zero and the one, and [we] translated that to the physical motion of switching something on or off,” Chiang, a Duncan College senior, said.

The sculpture is formed from 50 plywood boxes stacked 5 feet wide and 10 feet tall. Each contains an LED strip controlled by an Arduino processor, covered by a sheet of semi-translucent corrugated plastic. The boxes are constructed individually and then screwed together, enabling audience members to flip a switch to turn each box on and off.

“The idea of allowing people to play around with the switches was so that people could leave their mark [and] draw their pattern on this giant analog screen,” Xia, a Brown College senior, said. “After they’re done, they can sit down and see what the next person does.”

The team was heavily inspired by the theme of Archi Arts: 8-BIT. It paid homage to the 8-bit graphic technology that was developed and popularized in the ‘80s and ‘90s and pioneered computer graphics and color images.

“In response to the more technical theme of 8-bit, we wanted to bring in all of our disciplines,” Hsu, a Baker College senior, said. “Jeff has been working on some electronic stuff in an engineering class, and we wanted to combine that with all of our expertise in the woodshop and our architectural knowledge.”

The team ultimately used their combined skills to create a design as simplistic as possible.

“The end product is the result of trying to break down the 8-bit theme to its most basic component,” Malone, a Jones College senior, said. “We wanted to celebrate the simplicity of 8-bit for what it is.”

The team also relied on their architectural skills throughout the artistic process.

“The design process was mostly done through drawings and the computer — just trying to visualize everything. After we won the competition, that’s when we really tuned into how to manifest the project,” Xia said.

From the beginning of the design process the team considered how the audience would experience the installation.

The boxes are also designed so that the structure can be disassembled and still function.

“At some point we will probably break apart the boxes and distribute them so that people can keep one pixel of the piece,” Xia said.