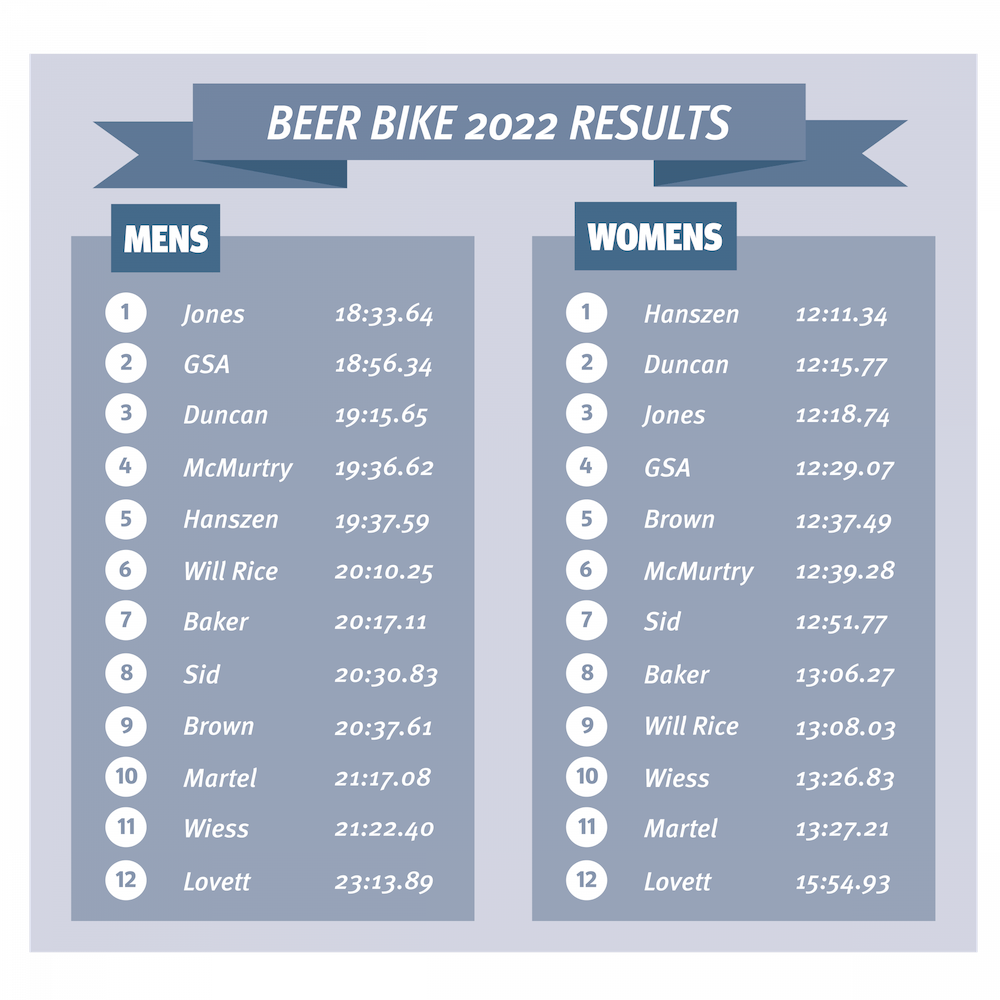 Terri-Jeanne Liu, one of two women’s bike captains at Jones, said they are planning to review video footage from the race day as evidence to send to RPC.

“Any eyewitness at the track could vouch that Jones crossed the line first, but based on the penalties that they sent and the times that they sent it, they have Hanszen  [College] crossing the line, like, two seconds before Jones,” Liu, a junior, said.

RPC Staff Advisor Tahj Blackman said the Beer Bike committee so far has conducted an initial review of the results.

“Based on the feedback that we have received, the committee has every intention of conducting another review,” Blackman said. “I know I plan to connect with them and see, based on the feedback, what they intend to do, whether that’d be recalculating, reconnecting with the judges to see if there’s any additional comments they can make towards their evaluations.”

Some of the judges originally trained and assigned did not show on the day of the race, according to Blackman. He said RPC filled these empty spots with veteran judges who happened to be there and had not yet officially signed up to judge.

“Even if [they] did have to fill in, we had the training on spot and readily available,” Blackman said. “All judges were required to be trained.”

Jones’ other women’s bike captain Victoria Lee said she is not upset that another college won, but rather that she is frustrated with how RPC has handled the results process in this and previous Beer Bikes.

“I don’t even know who is judging the races or how much experience they have with judging the races,” Lee, a senior, said. “There needs to be some changes made in the way that the judging occurs because it’s just not fair to, not just us, but all of the other residential colleges and captains, that we have to receive the final results and then have to fight our way to figure out what the truth is.”

Matt Barnett, chief chug judge this year, said there were some first time judges in this Beer Bike, which is not unusual.

“I think it is important to remember that all judges at Beer Bike are volunteers from in and around the Rice community. As such, there is going to be an expected level of ebb and flow of personnel from year to year,” Barnett wrote in an email to the Thresher. “I don’t think having new chug judges in any given year detracts from the standard of Beer Bike officiating.”

Liu said this year’s controversy comes on the heels of issues last year, when the official results were updated in response to a petition by Hanszen captains alleging discrepancy between their time and RPC’s.

“I really wish the results actually reflected things that happened,” Liu said. “Even if we got penalties that took off our time and put us in a lower place, I wish that it was more transparent … The times that we got just didn’t reflect what actually happened on the track.”

Blackman said the committee anticipated some dispute and is therefore open to conversations with captains and students now.

“Everyone wants accuracy,” Blackman said. “I think it should just be as transparent as possible. I don’t think there should ever be any pushback with that.”

Lee said she enjoyed the experience of once again racing in a full-scale Beer Bike her senior year.

“Even if the results don’t reflect our win per se, it was still super fun,” Lee said. “For me, that’s what I’m going to really remember.”

Dani Knobloch, Hanszen women’s bike captain, said she and her team were elated when they found out the results.

“We were already super proud of our team for how we did on the track, so getting the notification that we had officially won was a really wonderful surprise,” Knobloch, a junior, wrote. “[Five of our eight] riders hadn’t ridden a Beer Bike before and most were newer riders to the team, too, but everyone worked super hard and was super speedy and it paid off.”