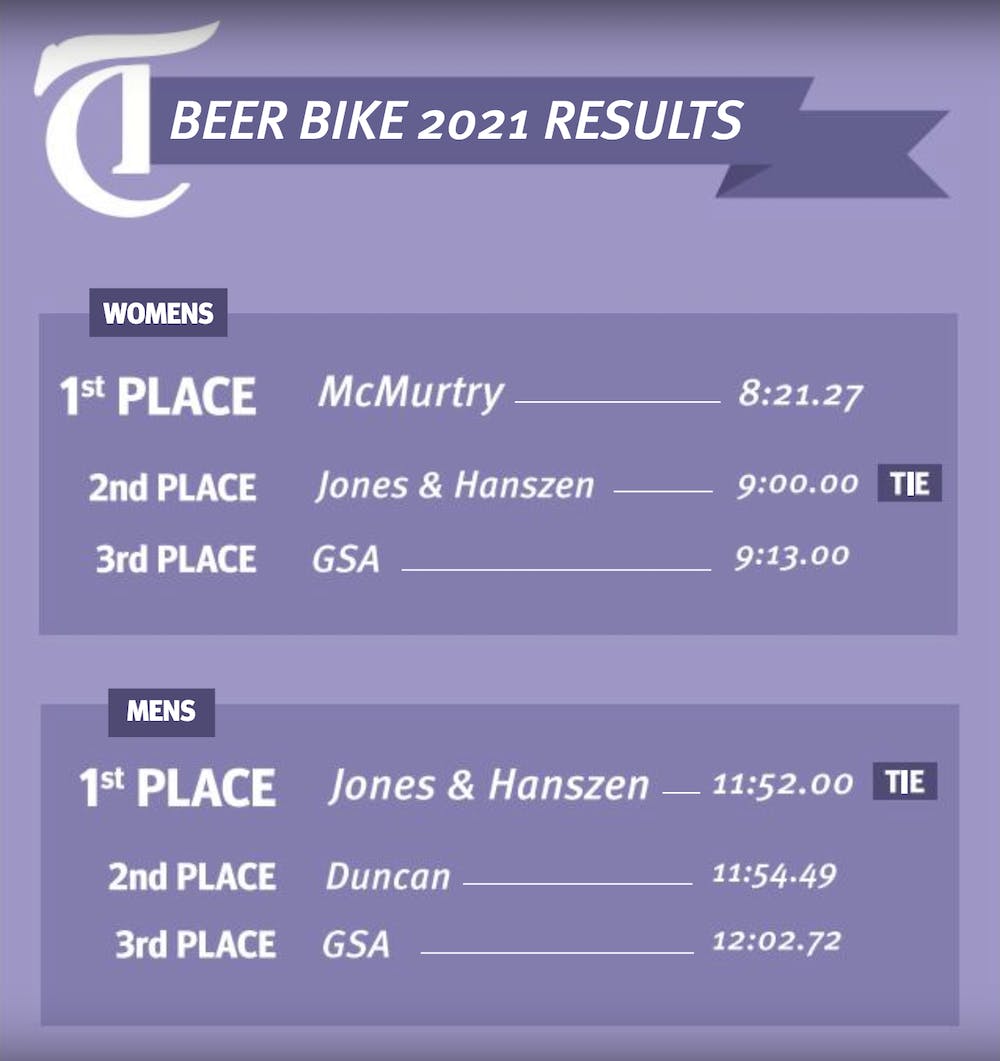 Hanszen College tied with Jones College for first place in the men’s race while also tying with Jones for second place in the women’s race, according to updated Beer Bike 2021 results posted by Rice Program Council. These times were adjusted following a petition submitted by Hanszen due to discrepancies in their own recorded time versus RPC’s time. McMurtry College won the women’s race by almost 40 seconds.

captains and Beer Bike coordinators felt that the times and penalties were not accurate.

“Several of us then independently rewatched the official livestreams to calculate the times, before penalties, for both Jones and Hanszen’s women’s and men’s teams,” Reece, a junior, said.

According to Reece, one of the Jones bike captains also independently calculated the times and came to a very similar result for the times as the Hanszen captains. Reece said Hanszen included the recorded times in their petition to RPC and the fact that Jones calculated similar times.

According to Jones bike captain Mahmoud Al-Madi, while they calculated similar times, there is a three-second lag between the chug

camera and the bike track camera that should also be accounted for.

there being a delay between the chug and the biker starting,” Al-Madi, a junior, said.

Al-Madi said while there is ambiguity with the Hanszen women’s net time due to lag in audio and video for the livestream at the beginning of the race, they concede that Hanszen women were four seconds faster than the Jones women based on the livestream. However, Al-Madi said they believe this is not the case for the men’s race and believes the Jones men’s time should be three seconds faster than Hanszen.

Reece said Hanszen did not find a similar lag with the men’s races, but said that he thinks more generally that attempting to compare times from the races that were not head to head becomes increasingly difficult after looking into each of the minutiae.

“In addition to potential livestream lag, the variation in wind, temperature, drafting, other cyclists on the track to chase all also make it difficult to compare times,” Reece said. “Given the limitations of the timing system, I am satisfied with knowing that the times of the Hanszen and Jones men’s teams are very similar and seeing that reflected in the official times as a tie, especially given that we were unable to directly race one another.”

Al-Madi said Jones let RPC know about the lag in the livestreams and said he hopes they take it into account to further adjust the men's final Beer Bike results. Al-Madi said he wishes RPC had updated the times and penalties with more transparency.

Jones bike captain Theo Vadot said there needs to be a higher standard for timekeeping in the future.

“It's inexcusable for results to be this uncertain and have to rely on individuals who participated in the race to ‘prove’ their times when those times should already be clear and official,” Vadot, a sophomore, said.

Reece said the timing issues this year proves that a more consistent timing system should be implemented for Beer Bike 2022 so that each team is happy with the results. Reece said that RPC was open with them during the petition process.

“RPC has been very polite and reasonable in regard to our petition, so we thank them for hosting the races and being open and reasonable with petitions,” Reece said.

Al-Madi said amidst all the logistical issues, they are proud of Hanszen and could not have asked for better rivals.

“Together we really spiced up Beer Bike this year. We even started to go out on bike rides together,” Al-Madi said. “I think that this can be the beginning of an epic Jones-Hanszen Beer Bike legacy and overall campus-wide Beer Bike culture, and we're excited for it.”

RPC did not respond in time for publication.