‘To BeReal or not to BeReal’: Students discuss the trendy social media app 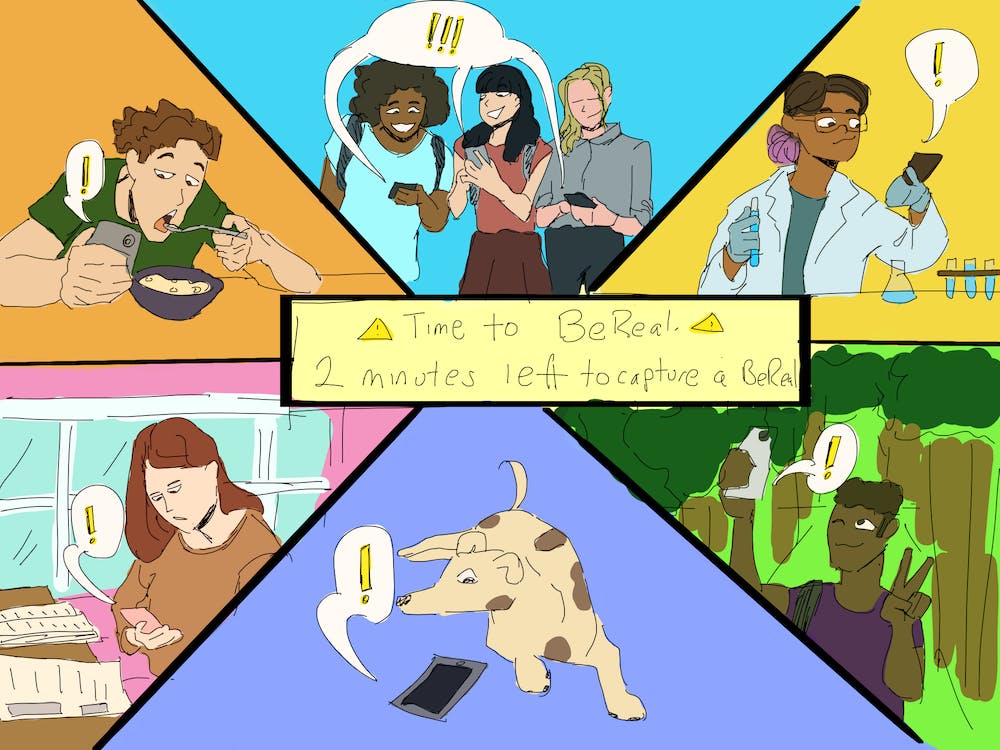 A new app has been trending on campus, promising authenticity and a new way to connect with friends and family. While Instagram revolves around photos that people can meticulously curate, BeReal is an image-based social media platform that picks a random time every day when users have to post – a condition that is supposed to encourage more natural photos. A daily upload is necessary for a user to see other people’s posts and to interact on the app; users are forced to actively participate rather than passively scroll.

Paige Russell, a Will Rice College junior, said she downloaded the app in November after hearing about it from her cousin and soon began to talk to other Will Ricers about it.

“It lets you keep up with people in the way that Snapchat does, but also Snapchat’s lame,” Russell said. “It’s fun to see what mundane tasks other people are doing throughout the day.”

Hanszen College sophomore Mimi Filkin is another avid user of BeReal. Filkin said she enjoys being able to connect with all her friends at the same time and especially loves seeing what her family members who live far away are up to on a daily basis.

“​​I heard about BeReal through another friend at Rice,” Filkin said. “Then I texted my whole 30 person swim team and was like, ‘Everyone get BeReal because it’s the best app ever,’ and they thought I got hacked or something.”

According to Brenden Frizzell, a Martel College sophomore, the randomized time and unpolished nature of the images make using BeReal fun.

“​​I like how quick it is as well as the premise of equality it conveys. Everyone having to post a BeReal before being able to see everyone else's is a great way to make sure all of your friends are also sharing updates on their days with you,” Frizzell said. “The only thing that bugs me about BeReal is when people post the floor and the ceiling ... If I wanted that, I'd use Snapchat to talk to [them].”

Russell said she thinks that the app loses its effectiveness when users find a way to curate their online presence by disregarding the scheduled post time.

“I thought it was really goofy and stupid, and I love things that are both stupid and/or goofy,” Russell said. “A lot of users don’t like when people post late because [that] loses the authenticity.”

Will Rice sophomore Ben Teddlie said the custom RealMoji reactions was one of his favorite parts of the app.

“Reactions are integral to BeReal,” Teddlie said. “Having a reaction you click on for everyone is not the point. It’s much more fun when people use custom RealMojis to interact on the app.”

However, Teddlie said he deleted BeReal after feeling pressure to interact with it daily.

“One day I posted simply because I hadn’t posted on the app yet and didn’t want to break my streak of using BeReal,” Teddlie said. “And I figured that was a bad sign.”

Some Rice students are involved in the app even if they don’t have an account. Brown College senior Kennedy Coleman said she doesn’t have the app, but she takes part in her friends’ daily posts.

“It always happens when [my group of friends] are all together in a meeting, so we always take a pause and do the BeReal,” Coleman said.

Others said they never warmed up to BeReal. Will Rice sophomore Cameron Pentland said he has no interest in sharing random moments of his day, which is the main draw of the app.

“I’m glad that so many people are having fun with it, but I don’t see the point,” Pentland said. “At any given point in the day I’m in class, doing homework or watching YouTube or something. If I’m actually doing something interesting, I’m not going to open BeReal. So why [use the app]?”

Martel sophomore Elias Hansen said that he started using BeReal in August last year and was one of the first students to promote BeReal at Rice. Last month, he became one of seven campus BeReal ambassadors, who facilitate events and perks like free boba to recruit new users. Hansen said that the only Texas schools with a BeReal campus ambassador program are Rice and the University of Texas, Austin. He said that according to data from BeReal, Houston is the city in Texas where the app is most downloaded.

“It’s a little bit surprising when there are big state schools like [Texas A&M University] or [Texas Tech University] with a much larger student population and groups like fraternities and sororities [yet they don’t have the campus ambassador program],” Hansen said. “I think it speaks to how popular it’s become on campus and how much of a social aspect of life at Rice it is.”

Anne Rubsamen contributed to this reporting.