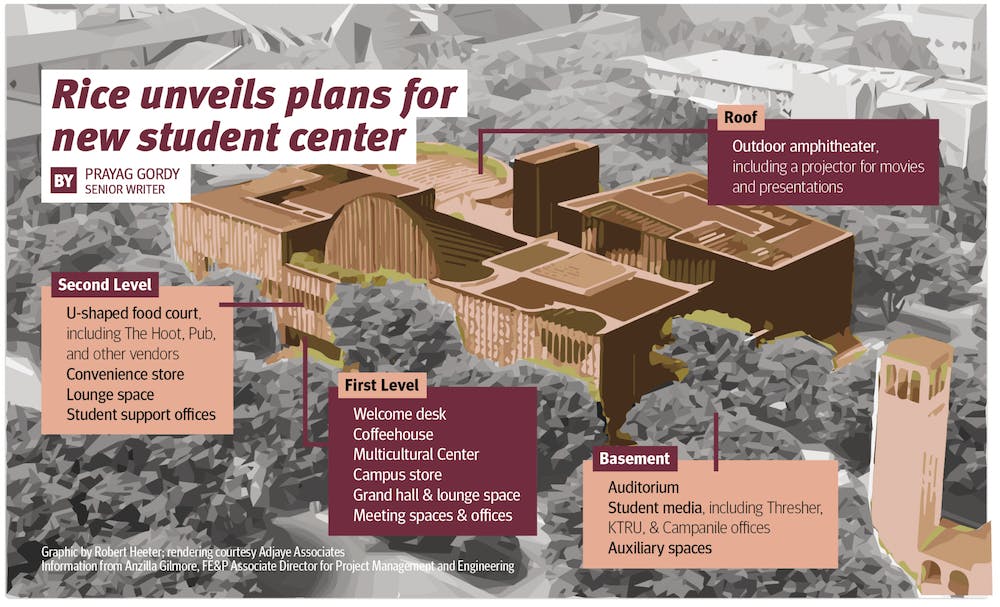 The new student center will include a basement auditorium, a two-story multicultural center and a second-floor food court, according to Bridget Gorman, dean of undergraduates. Anzilla Gilmore, the project manager, said that construction is still scheduled to finish by fall 2023.

Coffeehouse will have a new space in the corner of the Rice Memorial Center, with both internal and external access, Gorman said.

The Pub at Rice and The Hoot will be in the food court, according to Johnny Curet, campus dining director. Housing and Dining will finalize the outside vendors by spring 2023.

The Center for Career Development is moving into the building, Gorman said. No offices that are currently in the building are moving out.

“To steal a line from Kevin Kirby, this is going to be one of the most hard working buildings on campus,” Gorman said. “[The Center for Career Development] does a lot of programming and offers a lot of ongoing services to students, but they’re in Huff House on one side of campus. It made some sense to more centrally locate them.”

The new student center will be 15 percent larger in square footage but will have a similar footprint to the current building, according to Gilmore, Facilities Engineering and Planning’s assistant director for project management and engineering.

Undergraduate and graduate students have been involved in the planning process through the project’s steering committee, which includes Gorman, Gillmore, Associate Dean of Undergraduates Kate Abad and other representatives.

“I think one of the other things I’m really excited about is that we’ve worked really hard to make sure that there were students on the steering committee from the beginning in a way that a lot of projects on campus don’t have students,” Abad said.

The new RMC will serve the Rice community as a central part of campus, according to Caitlin Lindsay, the student center’s associate director for student-run businesses.

“I think student unions have this really cool and unique piece of being locked in a focal point of campus, a kind of a central piece of how we meet needs of students, staff, faculty, community members now as well as trying to plan for the future,” Lindsay said. “I think it perfectly fits with the goal of a student union or student center is to be this place for student experiences to occur, and I think our student run businesses are a perfect example of the learning that happens in and out of the classroom and those experiential education pieces that really help set you up for just continued success while you’re in college and post.”

The second-floor food court will be shaped like a horseshoe, according to Elizabeth Groenewold, Pub’s general manager. When other vendors are open, Pub will not be able to serve alcohol because of restrictions from the Texas Alcoholic Beverage Commission, Groenewold said.

“We’d only be able to be open when the other vendors are closed,” Groenewold said. “As of now, the Hoot is also going to be in this horseshoe-type area, and at night when it turns into Pub space … they said that there’s going to be some sort of moveable door that they put in place.” Groenewold said she wishes Pub did not have to share space in the food court.

“I really did want to get Pub our own space, but admin has been very adamant about the fact that a big issue with graduate students is that they don’t have any dining options on campus,” Groenewold said. “Essentially a third of the second floor is supposed to be dining options, which is this horseshoe area for graduate students.”

The steering committee did not give Pub any other options, according to Groenewold.

“I think that [admin] does want to give us what they think we need, but it just seems like they had made a lot of decisions as to what Pub was going to be before they talked to anyone from Pub,” she said. “Even when I first met them, they were like, you’re in this horseshoe place, there’s no other room for you, you can only have one corner, we’re going to cut your hours, we might not be able to get you a stage, which was a little frustrating.”

Groenewold said that Rice has since kept her in the loop and asked what Pub needs to operate.

“I’ve had five meetings with a bunch of different people who are in this quite frequently to make sure that they are asking me what I think Pub needs and what the space would look like when it’s Pub space, which I found helpful,” Groenewold said.

It is unclear how much creative control Pub will have over their space in the food court, according to Groenewold.

“They know about the signs I want to keep there because I sent them that entire list of all the stuff I want to be able to hang and put in Pub,” Groenewold said. “I hope that they’ll let me do that, [but] if not, I don’t see why they would have an issue with me hanging things, just at night … They did promise me that they’re going to install a sound system that we’ll be able to use. They said they’re working on a stage that we’ll be able to use. And they did say that we would have dimming lights so that we can make it feel like Pub.”

Abad said she has avoided trying to restore current spaces in the new RMC.

“I think that I have really been having to push myself to realize that we’re not recreating spaces, we’re building a brand new building,” Abad said. “We’re trying to encourage everybody when they think about spaces not to imagine how they are recreating something that they have now, but how we can take something brand new and beautiful, and help create something new.”

Groenewold said she is anxious about the effects of the new shared space on Pub culture, rating her level of worry a nine out of ten.

“It just feels very tumultuous,” Groenewold said. “I hope that Pub culture is going to survive, and I think with the bartenders we’ve hired, I’m optimistic that it will within the bartenders, but it’s just hard to say what Pub will look like three years from now with new students.”

This year’s reopening of Pub after more than a year without service has given her a bit of hope, Groenewold said.

“I was worried about [Pub] when we reopened after two years being closed, and it went great,” Groenewold said. “I’m hoping that the love people have for Pub will survive all this, despite all of the moving and changing and new spaces. I’ve seen before that it can, so I just hope that it continues to prove that it will.”

Jinhee Shin, Coffeehouse’s general manager, said she is excited about their space in the new student center.

Along with other memorabilia, Shin said Coffeehouse will bring their iconic sign with them.

“Something that’s very memorable to us is the Coffeehouse sign that’s been there since before even we were at our current RMC location, I think when we started off in Hanszen,” Shin said. “That’s one thing that’s very sentimental to us, so we’ll keep that in our temporary space and we’ll take that with us into the new RMC.”

Groenewold said she wishes Pub would receive a similar expansion.

“I’m a little jealous, to be honest, just selfishly because I love Pub and I wish admin cared about Pub that much,” Groenewold said. “But at the same time, if I was in admin, I would want to show off the student-run business that is the most trafficked coffee shop in Houston rather than, this is where our students drink. I do get it.”

Event spaces in the new RMC

The new primary event space will be connected to Ray Courtyard, according to Abad. Ray Courtyard and Rice Memorial Chapel are not part of the current renovation, Gorman said.

“There’s some additional spaces that are kind of adjacent to [the current Grand Hall] on the Ray Courtyard side that really are ideally going to help create some additional programming space,” Abad said. “If you think about our current Grand Hall, there’s no doorways out into that space, it feels like such a beautiful space to be able to kind of have some flow and you just don’t get that in our current space right now.”

When no events are scheduled, that multi-story space will serve as a lounging area, Gorman said.

Gorman also said the new student center will have an amphitheater on its roof.

“When you come in on the one corner, there’s a kind of circular, kind of stadium seating area, and then there’s this almost rectangular box that comes up where you can project onto it, where you can have evening movies on the roof,” Gorman said.

As the RMC approaches its demolition in May, the student center will host events to celebrate the current building and to give information about the temporary locations of the displaced offices, according to Kristen Ernst, student center director.

“We’re hoping to actively market those alternate locations so that students know exactly where they can find the resources that they are accustomed to coming to the Student Center to connect with, different departments or different entities that are currently within the building,” Ernst said.

Abad said she is looking forward to seeing how students take advantage of the new spaces in the student center.

“We also have a brand new space in the lower level, that is the 150 to 200 seat, fixed seat auditorium,” Abad said. “Rice students are so creative. I’m excited to see what type of programming that might inspire that we don’t have right now, or what type of programming might be happening on a smaller scale that that space might allow them to do something bigger and better.”