Live tattoo show is ‘Self Care’ for artist, audience 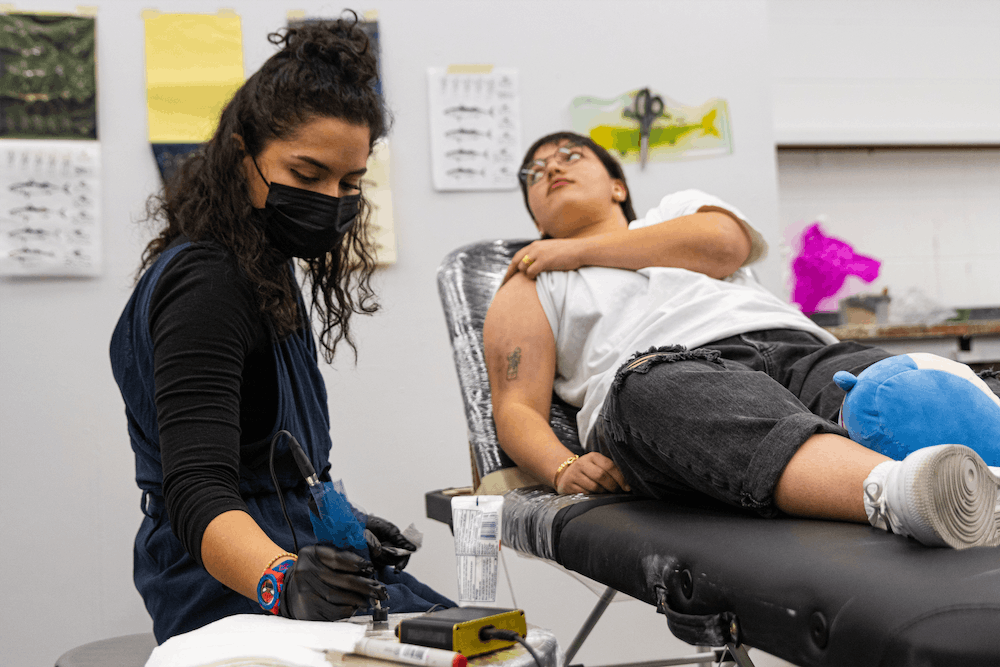 Adriana Amaris, a Sid Richardson College senior, gave a closing night performance for their solo-exhibition “Self Care” at Sleepy Cyborg Gallery on Feb. 18. The show consisted of two parts: a collection of eight mixed-media art pieces inspired by tattoos and the tattooing process, followed by a live tattoo show held on the last day of the exhibition, where Amaris tattooed two of her friends with artwork featured in the show.

The live tattooing performance took place over two and half hours, and at any one time had between 50 to 60 people watching. They gathered in smaller groups around Amaris and their tattooing table, watching their intricate line work and graceful movements. The gentle hum of the tattoo needle was accompanied by laughs and chatter from the spectators. Amaris remained focused on producing their art, continuing to tattoo amid the noise and motion of onlookers. Throughout the performance, the audience was able to watch the work gradually appear on the skin of the student volunteers.

“The piece that emulates most what I want people to take away from the show is called ‘Ouch’ … It’s kind of silly, it’s really whimsical and experimental. Tattooing can be silly, it can be experimental, it can be very meaningful.” Amaris said.

“Ouch” consists of bottle caps set on an acrylic plastic sheet, spelling out the word “ouch.” The whimsical and silly energy that Amaris references is conveyed through haphazard and sporadic brushstrokes on the acrylic.

Other pieces celebrate the tools of tattooing. “Tattoo To-Go” repackages and presents tattooing equipment — the machine, cording and ink — in a small box, thus celebrating the medium and asking the viewer to see it not just as a tool but as art itself.

Amaris began tattooing during lockdown — starting on oranges, herself and then others. It was a form of self care for her. One of Amaris’ biggest inspirations is Pia Roque, a queer Filipina tattoo artist who motivated them to pursue tattooing as an art form.

Amaris said that her work draws heavily from their Indigenous Colombian heritage in the style of their artwork.

“I’m Colombian, and my ancestry is indigenous. I really do draw from the geometry and symmetry of these indigenous designs,” Amaris said. “Indigenous Colombian designs are pretty geometrical and symmetrical, and I like how they still delve into the spiritual and natural realm. That’s a common thread that I see in my work: a lot of line work but still pretty natural”

Since being interviewed by the Thresher in 2021, Amaris said that they have developed a better sense of herself as an artist.

“I think I’m getting a sense of what my style is as a tattoo artist and an artist in general, which is the most important thing to me,” Amaris said. “I don’t really know what I want to do after Rice … I want to keep designing in general. I do a lot of designing — graphic design, sculpture — and I’ll definitely keep tattooing myself, my friends, anyone who wants it.”