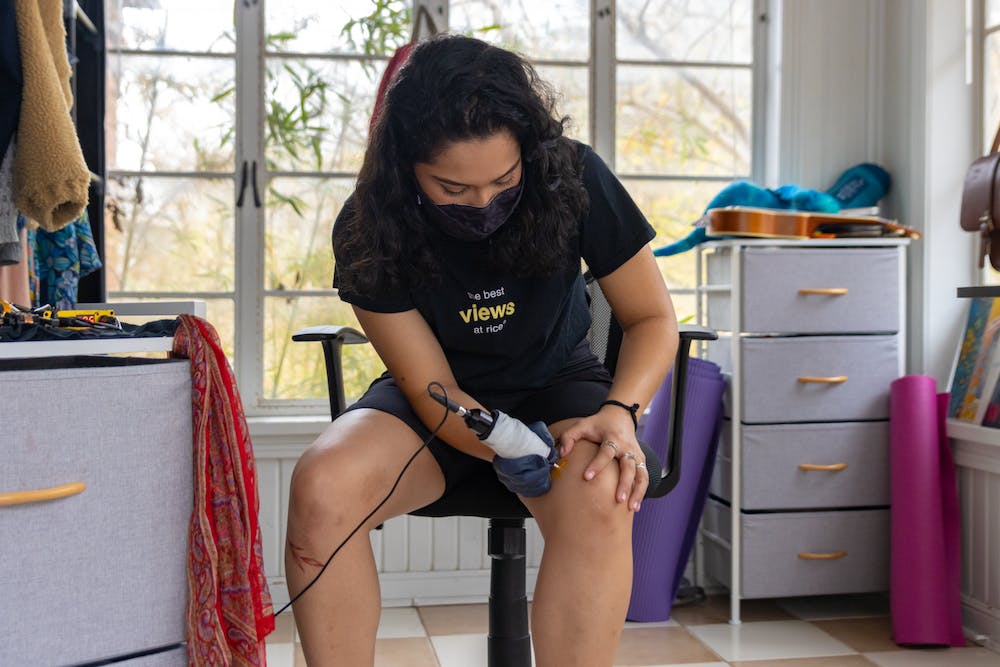 Adriana Amaris, a Sid Richardson College junior, has taken up tattooing as her pandemic hobby. She started by tattooing oranges, and has now moved on to herself and friends. Channing Wang/Thresher

Last spring, when many of us were learning to bake bread or dedicating our time to TikTok dances, Adriana Amaris sat with a tattoo gun buzzing against the peel of an orange. With sunlight coming in through her windows as she works, she says that tattooing herself and listening to music has become a form of self-care. Moving from oranges to her own skin to tattooing others, Amaris has steadily grown her confidence, skills and the number of people with her work etched onto their bodies.

For Amaris, a Sid Richardson College junior, her love of tattoos started long before she ever thought about picking up a tattoo gun herself.

“I always loved tattoos when I was growing up,” Amaris said. “My parents really hated them, so I think it made me like them even more and I wanted a ton of them ever since I can remember. When the pandemic hit, you couldn't really go out and get tattoos whenever you wanted.”

Wanting to pick up a new hobby while she was unable to safely go to a tattoo shop, Amaris said that she bought an inexpensive machine online and began practicing on oranges.

“Honestly, I was tattooing an orange, and I kind of was on a roll,” Amaris said. “I had tattooed all the oranges that I had and was like, ‘I don’t have any more room, and I’ve always kind of wanted a little coffee cup [tattoo]. I’m just going to have to do it on me.”

Amaris said she still had no plans to tattoo anyone else at the time, but others were interested in receiving tattoos. Over time, she opened herself up to the idea of tattooing another person.

“I started tattooing myself more and got more confident and recognized that I had a talent for it,” Amaris said. “It was something I really liked and wanted to share it with other people. It’s never really been about the money.”

Amaris’s love of art contributed to her journey into tattooing. She said that it has equipped her with many skills, mentioning the relationship between linework in tattooing and painting in particular.

“Since I was little, I have done mostly painting and drawing, watercolors specifically,” Amaris said. “I started doing graphic design. I learned through a job I had at Rice and then developed it at Rice Coffeehouse because I was the manager for graphics and marketing. I really learned a lot about composition, which is something that is really required in tattooing. It kind of was an easy segue from graphic design to tattooing.”

“I’m just really inspired by people’s work who I’m close with,” Amaris said. “As I absorb more artists’ work, I take some aspects of everyone’s work and create my own thing.”

Amaris said that having role models in tattooing is important — especially women who tattoo, as tattooing is an industry that is largely dominated by men.

“I have 20 tattoos, now 21, and I had never been tattooed by a female tattoo artist until a few months ago,” Amaris said. “This woman, Pia [Roque], she’s amazing. She’s this female tattoo artist and is indigenous Filipino, and she’s in Houston. I love her work. I’m inspired by it all the time. She told me, ‘You have to keep going. There aren’t women in this.’ It sucks because even if I want to apprentice it would be in a shop full of men.”

Amaris said that her tattoos are offered on a pay-what-you-can system. Her first time tattooing someone else was a close friend who had asked her to.

“She was my inspiration freshman year because she already had a few. I only had three coming into college,” Amaris said. “I was so honored when she asked me [to tattoo her], like, are you kidding me?”

While her confidence has grown since then, Amaris said that her first time tattooing someone else was nerve-wracking.

“I was really nervous because this is something that is going to be on [a] body forever,” Amaris said. “But it was really exciting as well because I felt confident. I was like, ‘I’m gonna do a good job,’ and it was more about finding the confidence to do it.”

Once she agreed to tattoo someone else, Amaris said that she practiced extensively in advance. She found that there were differences between tattooing herself and someone else that she had to adjust to.

“I just pretended I was touching myself,” Amaris said. “But I realized it’s a lot harder to tattoo other people than yourself. I don’t move when I’m doing myself, and other people twitch and move. I love them, but it makes it harder for me. My first experience tattooing someone was like, ‘Oh, this is harder than I thought. It’s also extremely exciting, so I’m gonna get as good as I can so that I can keep doing this.”

When it comes to giving people their first tattoos, Amaris said that it can be a different type of pressure.

“They remind you throughout the whole thing that this is their first time,” Amaris said. “It’s a lot of pressure. I almost feel like a tattooing fairy godmother. Like, I have to do a good job, but also I’m really excited for them to have the best experience with their first tattoo that they can.”

In an effort to do this, Amaris said she tries to create a welcoming environment for the people she tattoos, one that improves upon experiences she has had in the past.

“When I got my first tattoo, I was terrified. It’s a well-known fact that tattoo artists are kind of mean to people who don’t have tattoos,” Amaris said. “I didn’t want to be that for someone. I wanted to be someone who’s educating them and making it a positive experience.”

To do this, Amaris relies on her own ability to connect with the people she tattoos. She said that she tattoos people in a sunny area of her house, something that helps to create a more comfortable environment.

“When I tattoo someone, especially for the first time, I try to make it a nice space and put music on and remind them that the pain is temporary,” Amaris said. “I have a conversation, just try to ease into things, because it’s what I wish I had as my first few experiences.”

Marcus Tierrablanca, a Lovett College senior, said that Amaris made his first tattooing experience comfortable and was clear in explaining the tattoo process, making sure the experience was safe and provided helpful instructions for aftercare.

“I was very glad to have my first tattoo and tattooing experience be with one of my friends,” Tierrablanca said. “Not only was it a great experience for me, but I was also more than welcome and happy to help her perfect and practice this art form that she is very passionate about.”

One necessary concern Amaris has had to deal with is remaining safe throughout the pandemic as she gives tattoos. She said that she typically only does tattoos at her house and requires proof of a negative COVID-19 test before she will tattoo someone in addition to typical cleanliness requirements that come with tattooing someone safely. She also restricts the number of people who can come. She said that her tattooing others is feasible because of Rice’s testing capacity.

“You have to have a negative test, and I show you my negative test,” Amaris said. “I double mask. Just like in any tattoo shop, everything is wiped down to the max, because there’s a health risk outside of COVID with just tattoos.”

Typically, Amaris sanitizes her station, including her machine and the power box, with isopropyl alcohol before every appointment and makes sure the area and floor around it is swept, mopped and sanitized. She uses a green soap on the skin which she said is standard for tattooing, keeps gloves on during the process with sanitizing wipes on hand and lays down paper towels under all equipment down to catch any stray ink

Mia Guien, a Wiess College junior, who has received two tattoos from Amaris, said that her COVID-19 safety measures made her feel safer. She said that she was comfortable with the experience and pleased with the final product.

“She gave me a stuffed Squishmallow to hold because I was still nervous,” Guien said. “I'm really happy I went with her for my tattoos because she is very open to talking about the design which is super important because it's going on your body forever! Both my tattoos healed great and the lines and shading both look clean and neat.”

While she is unsure of what she wants to do with tattooing in the future, Amaris said that she is constantly trying new techniques, looking at online trainings and lessons and is considering trying to get an apprenticeship over the summer.

“I think, in a super ideal world, I would just become a tattoo artist,” Amaris said. “But it’s a very saturated field. I probably don’t want to do one thing for the rest of my life, so I’m kind of going with the flow, seeing what happens, seeing how people react, how I react, just letting it happen.”

No matter what she does with tattooing in the future, Amaris said that it has been good for her confidence, especially finding that people have wanted to book with her. She books tattoo appointments through her Instagram.

“The most shocking thing is having people say, ‘I want you to tattoo me,’” Amaris said. “I mean you have a lot of options here in Houston. There’s a million tattoo shops on Westheimer alone.”

In addition to boosting her confidence, Amaris said that tattooing has made a positive impact on her mental health and that receiving tattoos is a boost to her mood.

“I probably will tattoo that on myself: Don’t be sad, go get a tattoo,” Amaris said. “You shouldn’t always be getting tattoos. I’m going to run out of space eventually. I’m very grateful to have the skills to [tattoo myself], because it is an incredible mood boost. I recommend that everyone learn to tattoo, so they can have some weird form of self care.”