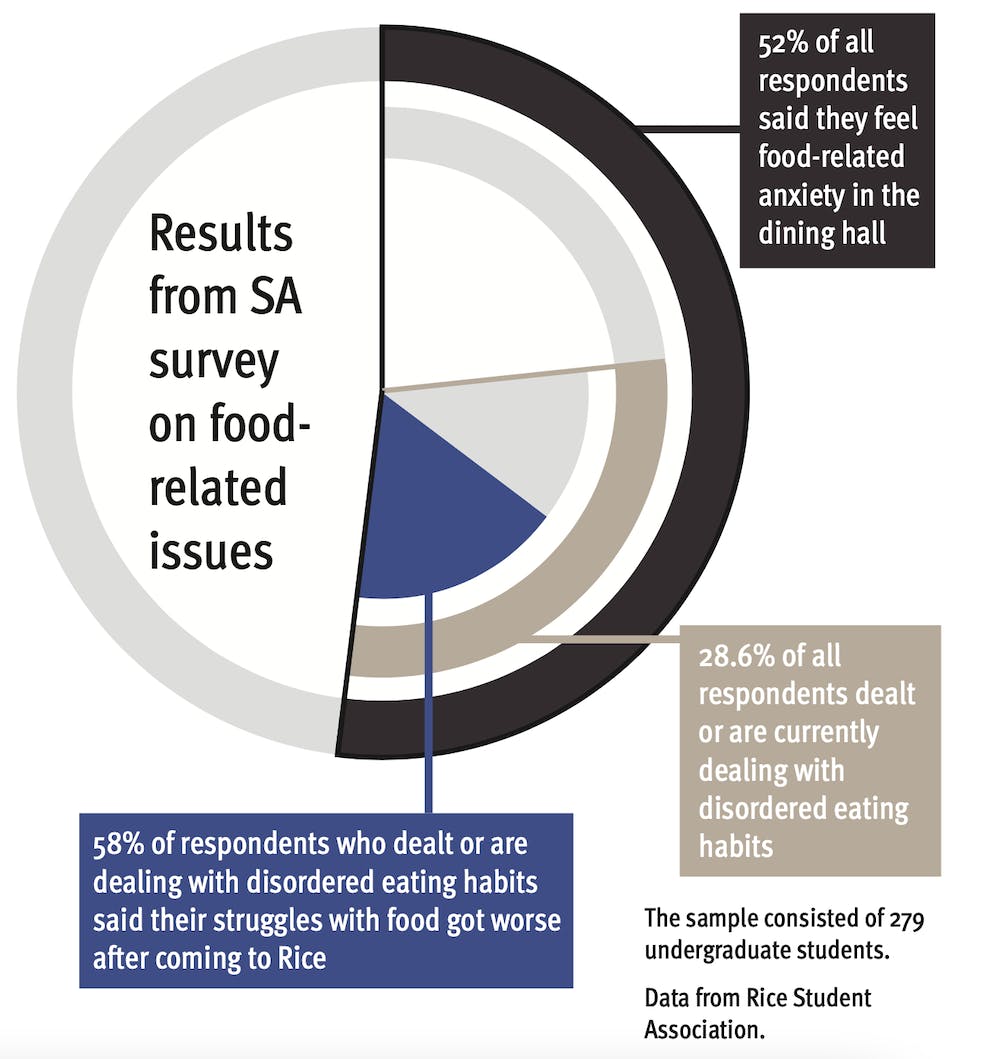 Editor’s Note: This story contains mentions of disordered eating. Some students interviewed were given the option of remaining anonymous in the interest of keeping their mental health private. Anonymous students who are referenced multiple times were given false names, which have been marked with an asterisk on first reference.

The SA resolution was introduced by senators Sarah Bartos, Skye Fredericks and Morike Ayodeji. According to Ayodeji, a McMurtry College sophomore, the resolution is a part of a larger discourse about dining on campus.

“I think this is a good starting point for the conversation about how we eat and how important it is to be healthy and mindful in how we’re consuming food,” Ayodeji said.

The resolution calls for Rice to hire both an eating disorder specialist and a dietician. Currently, the Rice Counseling Center recommends off-campus care for eating disorders, but the recreation center offers nutritionist services, according to Dean of Undergraduates Bridget Gorman and Timothy Baumgartner, the director of the Counseling Center. Gorman said that Rice is continually working on support measures for students with disordered eating habits.

“While Rice has been working toward creating programming about health, wellness and nutrition, disordered eating is difficult to combat since the factors shaping disordered eating extend well beyond our campus,” Gorman said. “That said, we are researching evidence-based practice interventions to potentially offer to our community to assist students who need support.”

According to Baumgartner, the counseling center focuses on trying to recognize the extent of any disordered eating habits to be assessed as soon as possible and recommends that students seek off-campus resources that offer more comprehensive care for eating disorders and disordered eating. Baumgartner said that students are frequently referred to the Houston Eating Recovery Center since they offer free consultations.

“Houston has such rich resources, [so] we really try to be very cautious about trying to replicate something that already exists in the community, because if there’s a program that’s dedicated towards that, they’re going to do it better,” Baumgartner said. “It really would even be an ethical question as to whether or not we’re somehow interfering with someone getting to a quality program versus see[ing] what we can do in the meantime.”

Cathleen* (‘21), who struggled with bulimia and restrictive eating during high school and throughout her time at Rice, said that being referred off campus was not what she expected when she sought help from the counseling center.

“I think I was mad about it at the time, but now, I’m thankful,” Cathleen said. “They helped me more in the long term. But I think in the short run, it was a little frustrating.”

Sarika* (‘21), who developed an eating disorder while at Rice, said that being referred off campus made getting mental healthcare more difficult.

“[The Counseling Center] said they weren’t capable of meeting with me and would refer me to someone,” Sarika said. “I think it took like about a week for them to refer me to someone in the area, but then that referral ended up not working out, because the therapists weren’t taking new clients. I reached back out [and] told them that didn’t work out. Then, things stalled.”

Margaret Dorsey, a Will Rice College junior, said that after her experiences with the counseling center she thinks having people more equipped to understand and recognize the early signs of eating disorders would be beneficial.

“I remember my counselor telling me [that] what if, instead of eating less, I just exercise more,” Dorsey said. “I’m a person who can’t exercise because of my health. So hearing that was almost reinforcing the behavior. Since I can’t exercise more, the only other option was to eat less … I feel like if I had spoken to somebody who was able to say, ‘That’s a disordered eating pattern,’ that would have saved me a lot of grief and trouble.”

Baumgartner said that it is regrettable when early signs of disordered eating are not identified, and counselors continue to try to improve their skills on a regular basis through continuing education, including education on eating disorders.

The resolution incorporates data from a voluntary survey that was sent to Rice students about food-related issues which had 279 student responses. Bartos said she aimed to minimize opt-in bias by asking senators to email the survey to colleges, discuss it at college government meetings, personally asking students to fill the survey out and by focusing on food-related issues rather than eating disorders in the title of the survey.

“Back home, recovery was a lot easier, because I didn’t have to stick to strict meal times,” Rupert said. “By having such limited meal times, it is way easier to skip meals, and therefore a lot harder to recover from disordered eating. People with disordered eating have very serious medical conditions, and it’s super important as a matter of access and inclusion that Rice supports them.”

Several students that the Thresher spoke to mentioned servery hours as being difficult to navigate while dealing with disordered eating. Alejandra Wagnon, a Wiess College junior, said difficulty navigating the servery caused her disordered eating to worsen.

“I would find myself struggling, especially after dinner, because it was so early,” Wagnon said. “These issues were only exacerbated by the pandemic — not being able to eat in [and] being nervous to be in the servery, because there was an airborne pathogen going around.”

Part of the resolution calls for food to be accessible in residential colleges outside of servery hours to make it easier for students to engage in intuitive eating. Intuitive eating is defined as a “self-care eating framework which integrates instinct, emotion and rational thought” in contrast to a diet mentality.

Lila Greiner, a Will Rice senior, said that having more options to eat outside of servery hours is important for those in eating disorder recovery.

“With disordered eating when you’re in recovery and trying to get better, you have to relearn all of your body’s signals,” Greiner said. “If you have to ignore being hungry because there aren’t options for food, that’s really dangerous.”

“It has always been really hard [navigating the servery], because I didn’t grow up eating American food or the type of food that they serve us often in the servery,” Kandru said. “So it was always hard for me to know what would society say is healthy? That was really hard for me as someone who grew up eating Indian food.”

Part of the resolution also calls for more flexibility in meal plan options. On-campus students at Rice are required to purchase a meal plan with 20 meals each week.

For students dealing with disordered eating, Alan Russell, the director of the disability resource center, said that students have the ability to request a meal plan accommodation. Russell said that chefs with Rice Housing and Dining will also work with students on a one-on-one basis to address their nutritional needs after they submit an accommodation request through the DRC.

Wagnon said campus culture also presented its own set of challenges and complications, and that she sometimes struggled with participating in social activities at Rice.

“Every single event has food or drinks, and when you do not participate in eating that food or drinking those drinks and you still want to socialize, sometimes people will call you out on why you aren’t eating,” Wagnon said. “I don’t want to inhibit myself from going somewhere, but when I do go and someone calls me out for not eating it makes me feel a lot more insecure about my habits and my disorder, but if I didn’t go to a social event that had food at Rice, I wouldn’t go to any social events.”

Abby Dowse was one of several students who said that the mental energy that her disordered eating consumed made participating fully in social and academic activities more difficult.

“It just took up a lot of my mental energy,” Dowse, a Lovett College junior, said. “My disordered eating thoughts were kind of constantly there. I think just feeling like I was trying to hide it from people around me, I think that that definitely made it harder to truly connect with people around me [and made] it harder to really put all the mental energy into school that I needed to to be successful.”

Dowse also mentioned that well intentioned compliments or innocuous comments had the potential to be harmful for someone dealing with disordered eating.

“[During] my freshman year, I did get a lot of comments that were very well intentioned about my physical appearance — people talking about how fit and how healthy, saying that they wish they had my self control around food,” Dowse said. “I would smile and say thank you, because people meant well. At the same time, there’s just this internal part of me that was screaming, because it was like, I’m not naturally like this. I’m literally trying to recover.”

Several current and former students mentioned concerns about the normalization of skipping meals whether to “save” calories or because other concerns like academics were prioritized above eating.

For Marceline*, a senior, her issues with disordered eating were worsened by a lack of financial resources.

“There was a point last semester where it’s either rent, or it’s food,” Marceline said. “So we are going to cut down on the food and pay rent first.”

“I have to eat during these two certain half-hour segments of the day, and if I have a class at that time I will avoid going to that class so [that] I can perform my ritual at that specific time,” Yasmina said. “I had a lot of unexcused absences this semester. I was afraid [my professors] would think I was making excuses. It was just that the answer wasn’t very simple, and there were a lot of obstacles to getting help, most of them financial.”

Cathleen said that while controlling food may seem like a way to find control for students dealing with an eating disorder or disordered eating habits, it will never offer the control that they’re seeking.

“It just consumes your whole life,” Cathleen said. “You have so much more brain space to do things [when you recover]. Even if you don’t fill up your brain space with homework, you have more brain space to just be happier, see your friends or just enjoy seeing a squirrel. It is so, so, so freeing, and that’s what I would tell anybody.”

Gorman said that she was unable to comment on specific portions of the resolution at this time.