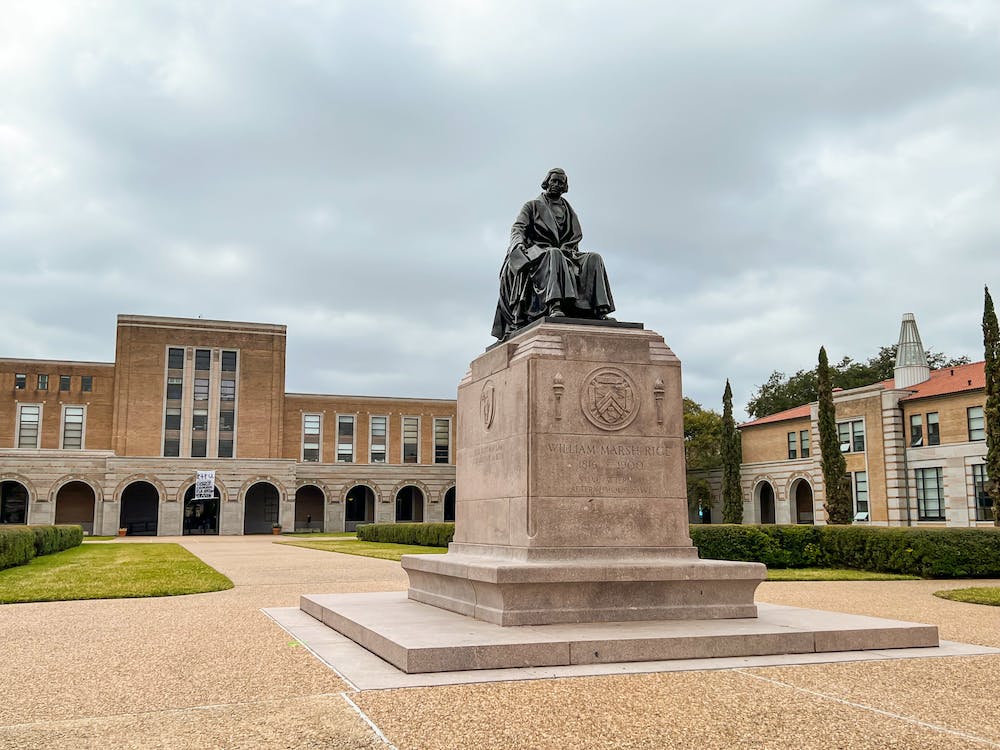 The statue of William Marsh Rice will be relocated to a new location within the Academic Quadrangle as part of an effort to more completely represent the history and values of Rice University, according to an email from the Board of Trustees on Jan. 25.

The decision comes after the board solicited input from the Rice community through an online portal in fall 2021, the Task Force on Slavery, Segregation and Racial Injustice unanimously called for a bold change in the Academic Quadrangle in its June 2021 report and the Student Association unanimously passed a resolution to relocate the founder’s statue on Nov. 29, 2021.

Incoming-president and Provost Reginald DesRoches wrote that he is very supportive of the Board’s final decision regarding the Founder’s Memorial.

“After extensive research and a thorough consultation process with the Rice community, the decision to reenvision the Academic Quadrangle to better reflect Rice’s history, values and where we are today as an institution is a sound one,” DesRoches wrote in an email to the Thresher. “I support this decision and am extremely appreciative of everyone who provided information and input throughout this process.”

According to the board’s statement, the new space will include information about William Marsh Rice, including his ownership of enslaved people and his “broader entanglement with the institution of slavery.” President David Leebron said that there are several ways that this vision could be actualized.

“Some people have thought maybe something would be added to the base of the statue, but it could also be put nearby,” Leebron said. “That’s something that people will have to discuss and figure out what seems most appropriate, but those kinds of details have not yet been decided. But it will be very close to what the Founders Memorial is [right now].”

Kendall Vining, the Student Association president, said that she’s happy to hear that the new space will include information about William Marsh Rice’s entanglement with slavery.

“I'm tired of passing by tour groups and seeing them pass by the statue, and they’re just taking pictures. There's a chance that they have no idea that this guy owned slaves,” Vining said. “It's not said [on the statue], which makes it seem like it's being hidden from people. I am glad that they are going to include some sort of information that identifies that this person who was our founder also was a slave owner.

Vining said that deciding to keep the founder’s statue in the Academic Quadrangle gives the impression that the university is still sensationalizing an object.

“Why is an object having so much control over what we decide is going to represent our campus? I feel like that's just not appropriate,” Vining said. “There are many ways to maintain history via documents, museum exhibits, etc. I feel like having a big statue that students are almost forced to pass by … is not in any way necessary to preserve history. [It’s] something I totally disagree with.”

Leebron said that he has received both pleased and displeased messages from Rice alumni since the release of the board’s statement.

“We’re already seeing messages come in from many alumni, and I would say some responses are very angry, but quite a lot see the thoughtfulness of the decision,” Leebron said. “I think that’s what people wanted to see —they wanted a thoughtful decision that was the result of reaching out to the community and listening carefully to the community. And the board took this issue very seriously.”

Leebron said that the administration will consult with landscape architects to redesign the Academic Quadrangle in a way that both represents Rice’s history and also is a welcoming place for students and social gatherings.

“The work will be carried out by the board committee charged with this, which is the buildings and grounds committee,” Leebron said. “I think what the board has decided is two things: [the statue] won’t be on the central axis, and it won’t be a singular point of attraction.”

According to Leebron, the working group considered alternative options before deciding to relocate the founder’s statue.

“One idea that was thought about was not moving the statue but undertaking additional work in the quad that would result in it not being a central point of attraction in a way,” Leebron said. “There’s an argument that there would have been a way to do that, which is to construct the additional monument that the resolution speaks about also on that central axis. I think at the end the board concluded that would not sufficiently address the issues that had been presented. The board felt that it was better to recognize all of our history and create a dialogue around that history.”

The board’s statement stated that it is necessary to recognize all of Rice’s history, including the founding of the school.

“The board believes that the founding gift of William Marsh Rice is an essential landmark in our history and his philanthropy should be recognized,” the Board of Trustees wrote. “The board believes retaining the image of the founder in the Academic Quadrangle best allows the university to convey the story of our university, including our rejection of the racial inequities of its beginnings.”

Vining said that, though she finds the final decision lackluster, it shows that students' voices are being heard and respected by the administration and the Board of Trustees.

“I feel like this was definitely what they would call a compromise … but it feels good to know that [the resolution] was taken into consideration, and the [board] did make a decision that was kind of congruent with what was written in the resolution,” Vining said. “This is why it's important for students to feel empowered enough and encouraged enough to use their voices on campus, because you can make a difference.”

According to Leebron and the email from the board, the vote on the relocation of the founder’s statue in the Academic Quadrangle was unanimous.

“It wasn’t one of those things where it just becomes unanimous because everybody thinks it’s better to be unanimous at the end,” Leebron said. “It was a case where the entire board saw this as the right outcome.”

“The SA resolution was very helpful [in informing the final decision], and the task force report was also an extremely important part of this process, particularly its research into the history of the particular location of the statue or things like that. The working group took a lot of time to meet with various people and hear a range of perspectives.”

Sanya Arora and Shivani Gollapudi, co-authors of the SA resolution to relocate the founder’s statue, said that they appreciate that the Board of Trustees has taken many of their recommendations, but they believe the statue should be removed from the Academic Quadrangle entirely.

“The fact that the Board of Trustees has approved for the relocation of the statue demonstrates that, contrary to previous statements made about the legal ramifications of moving the memorial, the statue can, in fact, be moved,” Arora and Gollapudi wrote in an email to the Thresher. “Therefore, we strongly believe the administration should have moved it, in accordance with the demands made in the Resolution to Relocate the Founder’s Memorial from the Central Academic Quadrangle, to a place that is not a focal location (as the academic quad is) on campus.”

The board wrote in their statement that the Academic Quadrangle will undergo other major redesigns besides the relocation of the statue. A new monument of similar prominence in terms of both location and visibility will commemorate the beginning of the integration of the university a half century after its racially exclusionary opening, and other monuments representing and celebrating other milestones and aspirations will be added in the future.

“More important than the changes contemplated for the Academic Quadrangle are the present and future actions we take to assure that our university is a welcoming environment for all,” the board wrote. “Much work remains to be done both to assure that our university is the diverse and inclusive institution in all aspects that we aspire to, and that we as a research university contribute to the evolution of our broader society in the same direction. Recognizing how valuable the communication with the broader Rice community has been as part of this process, we will continue that communication through a variety of mechanisms as we move forward together.”

According to Leebron, the goal is to complete the design process by the end of this semester and begin implementing those designs soon after.