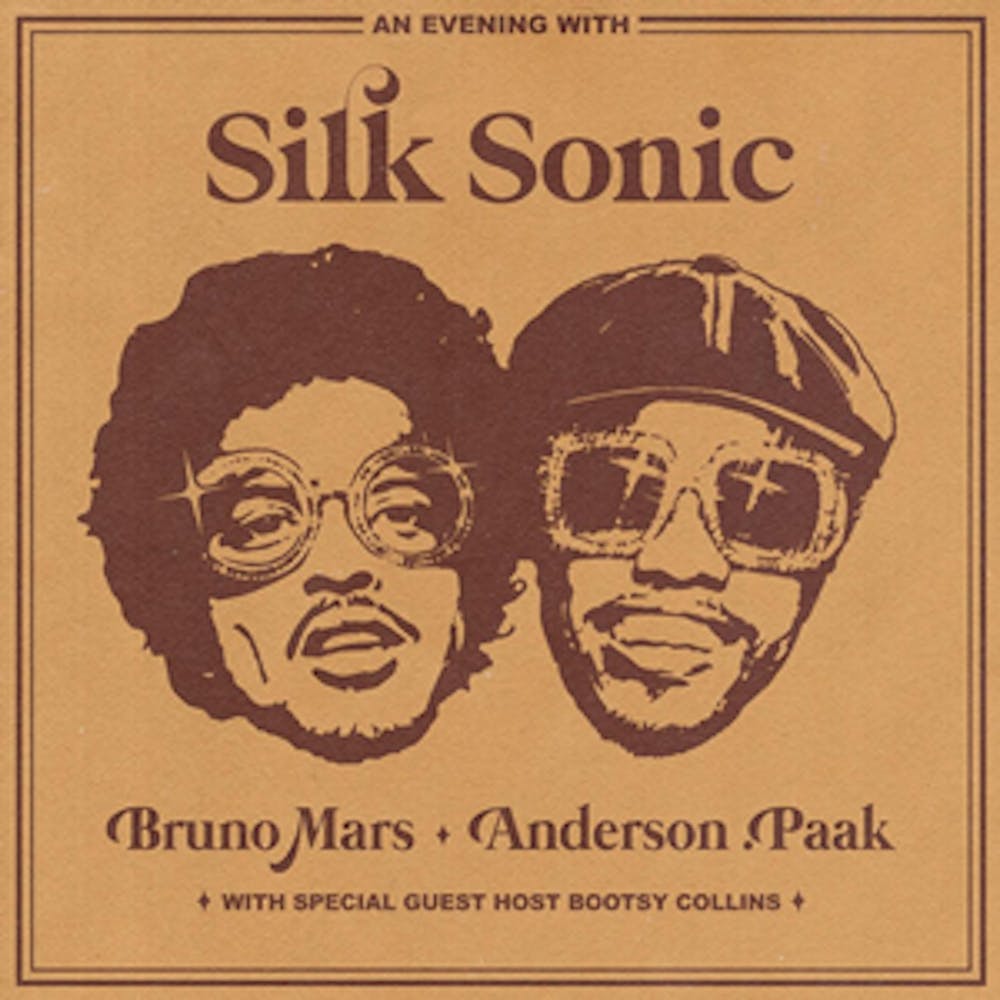 “An Evening With Silk Sonic” is a half-hour long album that embracecs R&B and funk and beautifully pairs the voices and sensibilities of Bruno Mars and Anderson .Paak. Like their combined name, Silk Sonic, the album is smooth and polished — a pristine tribute to classic funk and R&B sounds.

This emphasis on a classic sound is seen right from the start of the album, an introduction track where Silk Sonic introduces Bootsy Collins, who rose to prominence with James Brown and later with Parliament-Funkadelic. Collins is known for his unique voice and provides spoken word introductions that enhance the album’s homage to the past.

While the entire album dedicates itself to a singular style, there is a large range of feelings conveyed throughout. This contrast can best be seen with the juxtaposition of tracks such as “Fly As Me” and “Put On A Smile.” “Fly As Me” is a funky, grooving celebration of .Paak and Mars where they proclaim how they “deserve to be with somebody as fly as [they are].” The two’s witty and fun lyrics create an energetic and enjoyable track. The track has a tight bassline that combines with the vocals to create one of the most danceable songs I’ve heard this year, a song sure to inspire confidence in its listeners.

However, in “Put On A Smile” the two are seen without the ego and confidence of before. The song is a slow meditation on lost love that emphasizes putting on a positive appearance when “the only thing worth smiling for was you.” From the first note, the somber and longing feeling permeates the air with soft hits of piano and panning embellishments that shift between both headphones. This softer sound builds up to an emotional chorus with heavier instrumentation that culminates in Mars’ repetition of the word “you” in a clear, high voice, as if reaching to a higher power for help in his situation.

“Smokin Out The Window” is another standout track from the album that really leans into Mars and .Paak’s strengths as musicians. The track is the first thing that the two wrote together for Silk Sonic and began when one of them started repeating the phrase as a piece of comedic imagery. The instrumental features a clean motif built around crystalline high notes that engage the listener while .Paak and Mars complain about a woman the song’s fictional narrator was involved with. The stressed complaints juxtapose the narrator’s expectation of the relationship with its sad reality, something that started out with love but ended with the only tie being money.

With “An Evening With Silk Sonic,” Bruno Mars and Anderson .Paak have defined a unique style that brings the past to the present. Their collaborative effort has an incredibly polished and clean feeling that really speaks to the effort put into the album production and recording. My only real complaint is that it’s so short!