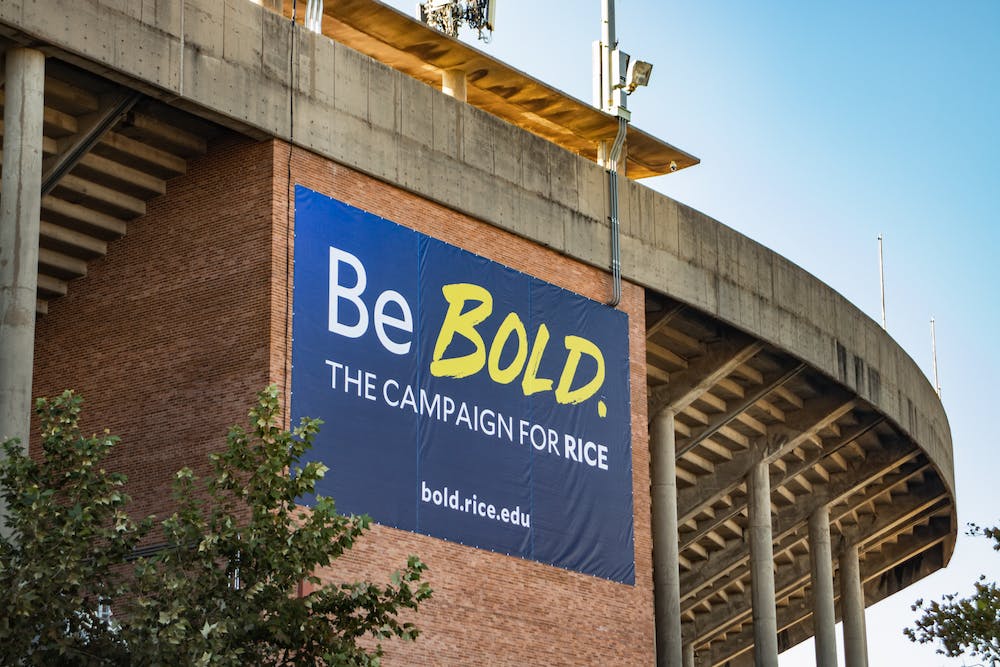 On Oct. 29, President David Leebron announced the launching of “Be Bold: The Campaign for Rice” at Owl Together’s Town Hall event. The campaign is a $2 billion fundraising effort, of which $1.2 billion have already been raised, aimed at expanding Rice’s facilities, faculty, student body, programs and overall reach and impact on the world.

According to a statement released by Rice’s Office of Public Affairs, “Be Bold” is the largest capital campaign in university history, planning to raise $2 billion by the end of 2025. The statement noted that the campaign has already raised $1.2 billion of its $2 billion goal.

According to a previous Thresher article, those donations will contribute to the new student center and the Welch Institute for Advanced Materials, respectively. Leebron stated that other donations have come from the generosity of alumni, reflecting Rice’s notably high alumni participation rate.

According to the campaign’s website, “Be Bold” headlines the university’s initiatives to be transformative, innovative, creative, visionary and equitable.

“Both the short and long term goals [of “Be Bold”] are to assure that Rice is at the forefront of universities, both in terms of our support for the education of our students and the research we carry out that truly impacts our world,” Leebron wrote.

The campaign’s launch comes as Rice approaches the 60th anniversary of the famed “We Choose to Go to the Moon” speech, delivered by President John F. Kennedy at Rice Stadium. According to the campaign’s website, “Be Bold” is named in the spirit of the 1962 speech, in which President Kennedy proclaimed that “we must be bold” to land American astronauts on the moon.

The campaign’s initiation also coincides with an improvement of COVID-19 conditions on campus, as according to Leebron, the introduction of “Be Bold” was initially planned for the fall of 2020 but was thwarted by the pandemic.

While “Be Bold” was only just announced, the campaign has been long underway, Leebron said.

“We have been in the ‘silent phase’ for the last four years or so, raising initial funds to count toward [its] overall goal and defining the primary aims and themes of the campaign,” Leebron wrote.

The website also said that ground is expected to break for the highly anticipated new student center in early 2022, and a 12th residential college will be completed in 2025 to accommodate Rice’s expansion of its undergraduate population by 20 percent. Overall, about $400 million of the “Be Bold” funds will go towards technology and building projects, according to the Office of Public Affairs’ statement.

The statement said that along with constructing state-of-the-art facilities at Rice, the “Be Bold” campaign will oversee an unprecedented growth of programs and resources available to students.

Along with continuing to support Doerr’s programs, “Be Bold” will provide further funding to resources including the Ethics Institute at Rice, the Center for Civic Leadership, the Rice 360° Institute for Global Health Technologies, the Oshman Engineering Design Kitchen, and the Kinder Institute for Urban Research, according to the site. According to the Office of Public Affairs, 13 professorships have already been added to allow for such expansion, as well as to maintain Rice’s lauded 6:1 student-to-faculty ratio.

Leebron said that a central theme of “Be Bold” is student opportunity. In its statement on the campaign, the Office of Public Affairs highlighted that $150 million will be added to The Rice Investment, which provides students with financial aid. According to the campaign’s website, funds will also support an increase in merit and athletic scholarships, financial accessibility of study abroad and internship opportunities, and programs aimed at preparing under-resourced students for the academic intensity of Rice.

Leebron said that Rice additionally hopes to increase its engagement with the Houston community by using “Be Bold” funds to expand the Houston Education Research Consortium. According to its website, HERC partners with 11 Houston-area school districts to create more equitable policies in the city.

“We must preserve what is special and cherished about Rice, but also change how we go about our missions in a world that has dramatically changed,” Leebron wrote. “Rice is again growing, and the campaign will help support that … We envision funding a range of new endeavors that, in the words of President Kennedy, will enable our students, staff and faculty to be bold in pursuing our missions and their aspirations.”