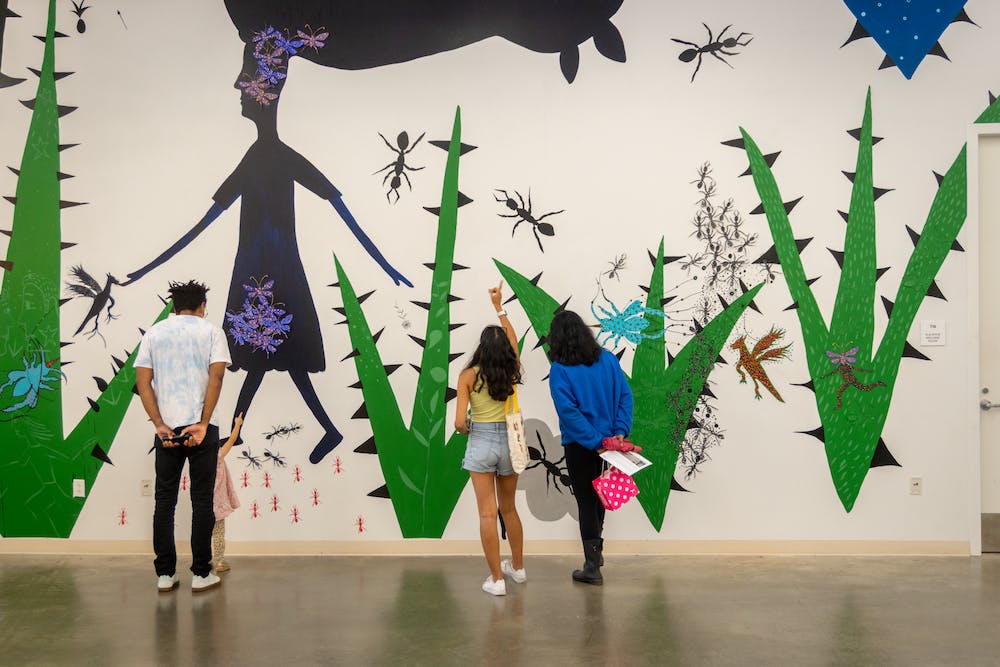 The Moody Project Wall, a new initiative that sets aside a large interior wall in the Moody Center for the Arts for muralists, recently welcomed its first tenant: Houston artist Gerardo Rosales’s “¡Displaced Mundo!,” an original mural meant to call attention to the struggle of Venezuelans displaced by the nation’s current economic crisis.

The mural was unveiled Oct. 15, the last day of Hispanic Heritage Month. The event featured a Venezuelan musical trio, a food truck and a drawing station, where children colored in stenciled outlines of ants, butterfly-headed humans and other trademark Rosales motifs. The event saw sizable turnout from the greater Houston community, which Frauke Josenhans, a Moody Center curator, credited in part to buzz from the artist’s past exhibitions at Lawndale Art Center, the Holocaust Museum, and area galleries.

Rosales, selected in part for his background as an educator, designed the piece alongside a team of student volunteers and is holding workshops throughout the semester about the shadow of colonialism and the difficulties of economic displacement. In the mural, these themes of suppression and exile are interpreted through the lens of the indigenous Venezuelan faith of María Lionza.

According to Rosales, the María Lionza faith was derided as satanic by early Catholic missionaries; driven mostly underground for centuries, it found veiled expression in Venezuelan Catholicism, where María was referred to as Saint Mary of the Ounce. Over those centuries, the faith evolved, incorporating Catholic and African beliefs. María became identified as a holy champion of the downtrodden and the exiled. The faith grew spectacularly. In 2011, one anthropologist estimated that 60 percent of Venezuelans had participated in the rites of María Lionza at least once in their lives, and Sorte Mountain, which she is identified with, has become a pilgrimage site.

“There is no one version [of María Lionza’s story],” Rosales said. “There are many tales. One of the main tales is that she was a beautiful princess with green eyes, which was unusual for her tribe … the tribe thought that she should be sacrificed. Her father decided to hide her in a fortress, with 20 strong warriors keeping her safe. But, one day, she escaped and came to a lagoon … and a huge snake, an anaconda, came and ate her.”

In the mural, that snake looms over María, high up. It was a later addition, according to  Josenhans.

“When you give an artist a huge wall, they want to fill it,” Josenhans said.

Though its eyes stare at María with palpable hunger, its expression is one of neutrality, even innocence. The snake is a danger without malice, like the mouth of an open well.

“She prayed to nature — to a mountain — and then nature made the snake explode,” Rosales said. “Then she became the mountain; she fused with the mountain and became the protector of the animals, the flora and fauna of the country, and the people as well.”

In a sign of her identification with Venezuelan fauna, María is often depicted riding a tapir, a large, trunk-nosed animal native to South America. In Rosales’ portrait, María is one with her tapir; the back of her head fades into its upside-down bulk. A moment’s look at the wall makes clear just how much Rosales loves syncretic beings. The portrait is filled with butterfly-headed humans, a reference to the most common anti-gay slur he faced growing up in Venezuela: mariposa, or, translated into English, butterfly. Fly-headed and ant-headed humans make appearances as well in the corners of the wall. Ants, in fact, are everywhere. Rosales uses them as a doubled symbol, identifying them with hardship and injustice, but also the beauty and immensity of nature.

The wide range of topics covered is due in part to Rosales’s own comfort with multiplicity.

“Sometimes I start working with ideas, with drawings,” Rosales said. “Then I start peeling the onion of my drawings and find the meanings.”

In addition to advertising through their own mailing lists, the Moody Center reached out to Hispanic Association for Cultural Enrichment at Rice and the Office of International Students & Scholars to recruit student volunteers. A total of seven students joined. They met with Rosales on Saturdays, painting and discussing for hours — a process that left Rosales pleased.

“They commit,” Rosales said. “We get in with the same level of understanding.”

On occasion, Moody Center staff and even passersby joined in. Josenhans said that, in light of this recruiting success, the Moody Center will continue to reach out to relevant student clubs for future installations on the Project Walls.