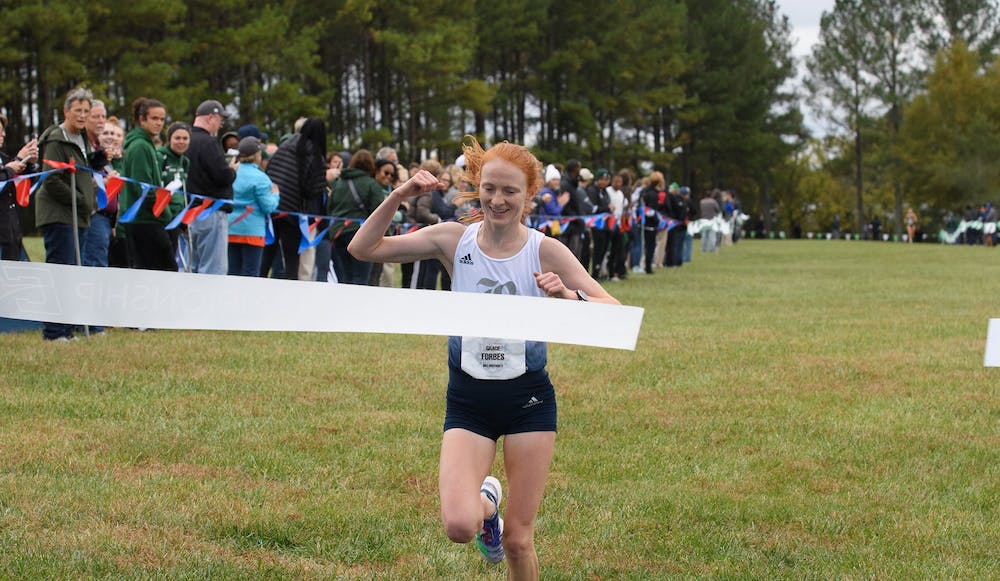 The victory was Forbes’ fourth in five races so far this year, and was her 10th career C-USA title (cross country and track & field combined). Her time of 20:24 in the 6k race, good for a pace of 5:28 per mile, was a full 31 seconds ahead of the second fastest runner. Head coach Jim Bevan praised Forbes after the race.

“[Forbes] is such a great racer, performer [and] competitor,” Bevan said. “I don’t have enough [good things] to say regarding this tremendous student-athlete. She took control of the race early on and moved away from her competition throughout.”

Forbes became just the fifth runner in conference history to repeat as conference champion. She also joined former Owl Cali Roper as the second in program history to win consecutive conference championships in cross country — Roper won hers in 2014 and 2015. According to Forbes, the race was fairly standard, though she did enjoy the North Carolina foliage.

“I was happy with my performance,” Forbes said. “I had a plan, executed it, and was able to defend my title. It was also so pretty to see fall in the northeast, it reminded me of home.”

Rounding out the top 20 for the Owls were senior Lourdes Vivas de Lorenzi, who finished No. 16 with a time of 21:47. Finishing No. 18 and 19 were sophomores Caitlin Wosika and Taigen Hunter-Galvan with times of 21:50 and 21:55, respectively. All three earned all-conference honors, along with Forbes. Following them was sophomore Alyssa Balandran, who ran a time of 22:11 and finished No. 24.

“Lourdes continues to improve, as do Caitlin and Taigen, [and] this was Alyssa’s best race ever as an Owl,” Bevan said. “In addition, [sophomore] Rachel Shoemaker was involved near our front group for virtually the entire race and helped the other three perform.”

Despite the four all-conference performances, the Owls came in behind Middle Tennessee State University and the University of Charlotte. According to Bevan, the Owls ran well, just not well enough.

“We ran the best race we’ve run this year,” Bevan said. “We went into running our race and we did pick people off throughout the race. Middle [Tennessee] and Charlotte were just better than us on Saturday.”

On the men’s side of the race, they secured four all-conference spots for the second straight season on their way to a No. 4 finish in the conference. Leading the pack for the Owls was ​​senior Hociel Landa, who placed third in the 8k race with a time of 24:06.

Landa’s performance earned him an all-conference selection for the fifth time in his career, a first in program history. Following Landa was senior Alex Topini, whose time of 24:28 was good for ninth in the conference. Head coach Jon Warren was pleased with Landa and Topini’s performances, along with his team as a whole.

“[Landa] ran a great race against outstanding competition,” Warren said. “As did Alex Topini who, after missing last year, came back to snag a very hard to achieve top 10 finish. In the end, the whole group had really good days and competed tremendously well against a unique field of teams.”

According to Warren, this year’s team is as good as they have been in over a decade. But the competition in C-USA was stiff, and that was reflected in the final standings.

“This year was unique,” Warren said. “We have about as strong a team as we have had in the last 15 years, and so did four other teams. And on [Saturday] all five teams ran well … so what we had was a very exciting race.”

Going forward, both teams will compete at the South Central Regional Tournament in Waco, Texas on Nov. 12. The individuals that make the cut at regionals will compete in the National Championships in Tallahassee, Florida on Nov. 20.