Beyond the gravel: how the John and Anne Grove came to be 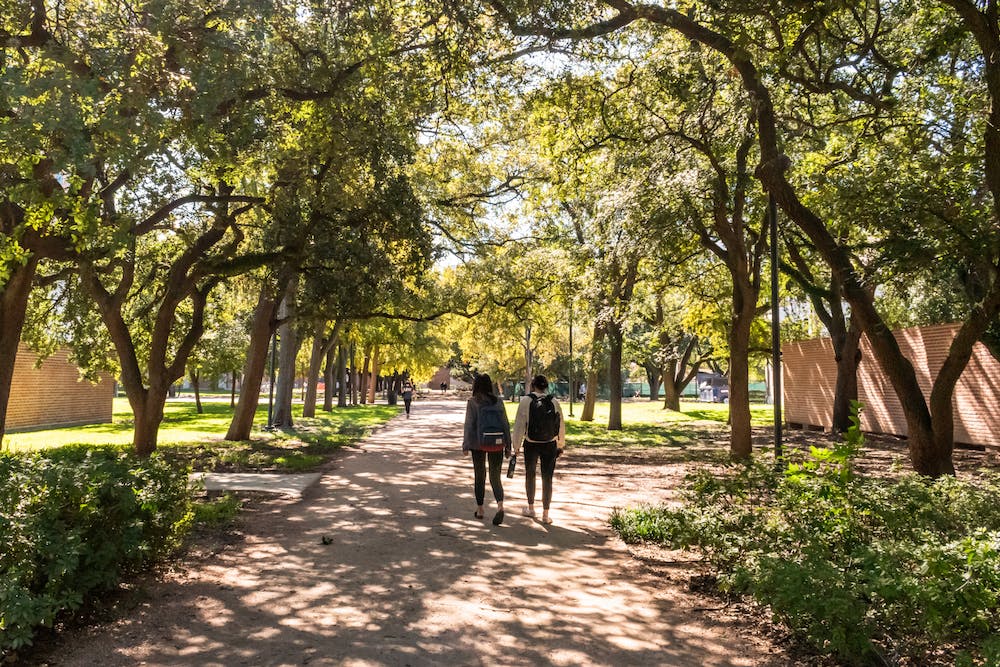 Nestled between four South colleges is the John and Anne Grove, a tree-lined path of decomposed granite that stretches from Sid Richardson College to the Inner Loop. Trees aren’t the only thing that have blossomed in the shaded quadrangle — in the 1960s, love did too. John and Anne Mullen, the namesakes and benefactors of the Grove, met and fell in love in the same area where Rice students now walk everyday.

The John and Anne Grove was dedicated in 2008, when John (Hanszen College ‘63) and Anne d’Olier Mullen (Jones College ‘64) donated money to preserve the quadrangle between Baker, Will Rice, Sid Richardson and Hanszen Colleges, according to a Rice Magazine article.

In the article, John said he first met Anne in the Grove in the fall of 1960, and their friendship, along with eventual romance, grew from there. According to a 2009 issue of the Thresher, John and Anne shared their first kiss under one of the trees in the Grove.

During his time at Rice, John played basketball for Hanszen and was elected to student leadership positions, such as sophomore class president. Anne, a year younger, was in the cast of “The Boyfriend” at Hamman Hall. In her senior year, she was an honoree for the Archi-Art Dance, an annual costume party held at Rice. John designed her costume.

Since its establishment, the Grove has been used for various events, such as RUPD’s annual Night Out, that bring the South colleges together.

Ridhi Gari, a sophomore at Hanszen, said she often walks through the Grove to get to dance practice at Sid.

“When I think of the Grove, I think of cutting through it the fastest way possible,” Gari said.

Priyanka Velappan, a senior at Sid, said that she uses the Grove mainly to get to some of her classes. However, according to Velappan, she has lingered in the area a few times.

“Sometimes, I sit at the benches that are at the front, waiting for people, but usually it’s [only] in passing. There was one time we took pictures at the end of the Grove when the flowers were blooming, because the flowers were really pretty [my freshman year],” she said.

Will Parsons, a residential associate at Will Rice and a pediatric oncologist at the Texas Children’s Hospital, lives on the border of the John and Anne Grove. Parsons said he often spends time working in a yellow lounge chair facing the pathway.

“I use [the Grove] for work stuff. I like to write there, actually, so I can put on some music.” Parsons said. “It’s so pretty out [there]. [It’s] sort of like there’s stuff going on around you, but you are away from everything enough that you can think.”

Sid freshmen Jonah Yi and Scott Koh, have used the Grove as an outdoor study spot, to work on a computer science assignment together, according to Koh.

“Sid doesn’t have a lot of open windows and stuff like that to get fresh air, so [working in the Grove] is a really nice opportunity to get to sit outside,” Yi said.

However, Yi said some improvements could encourage people to spend time at the Grove.

Parsons also said he wishes for more seating in the Grove, such as picnic tables or chairs. He said that the Grove is one of his favorite places on campus and that he has enjoyed spending time there during the pandemic. He said that the recent construction nearby has had a minor impact on his experience at the Grove.

“It’s a nice place to play cards with my friends,” Parsons said. “Sometimes I will do the New York Times crossword out there.”

However, students are less enthusiastic about the Grove during a classic Houston event: rain. The significant flooding when it rains can make the Grove difficult to get across, according to Koh and George Lyu, a Will Rice sophomore.

“Sometimes, when it rains, it’s really hard to go through [the Grove], because it’s really muddy,” said Koh.

Puddles can be an obstacle in the Grove, according to Rosemary Yang (’21).

“When it rains, there are huge muddy puddles in the grove, making it annoying to walk across. General life tip: don’t wear open-toed shoes on the Grove if you can,” Yang wrote in a Future Rice Owls blog post.

The pathways, made up of small brown rocks, are not paved. According to Velappan, paving the Grove could make it more convenient for pedestrians.

“Part of the culture of living in the South [Colleges] is going through the Grove and getting rocks in your shoes,” Velappan said.

According to the Rice Magazine article, the Facilities Engineering and Planning department replaced past concrete sidewalks with permeable granite to protect the Grove’s trees, some of which are up to 90 years old. The granite allows air and water to get to the trees’ roots.

Keith Autry, the Facilities, Engineering  & Planning director for project management, said that the Grove is here to stay, despite the amount of construction surrounding it. The only changes that it will undergo are minor ones, according to Autry.

“In the spring of 2022, construction of new accessible sidewalks and the installation of an emergency vehicle access drive for the new Hanszen Wing will begin,” Autry said. “Preservation of the Grove is continuous and will be enhanced during construction.”