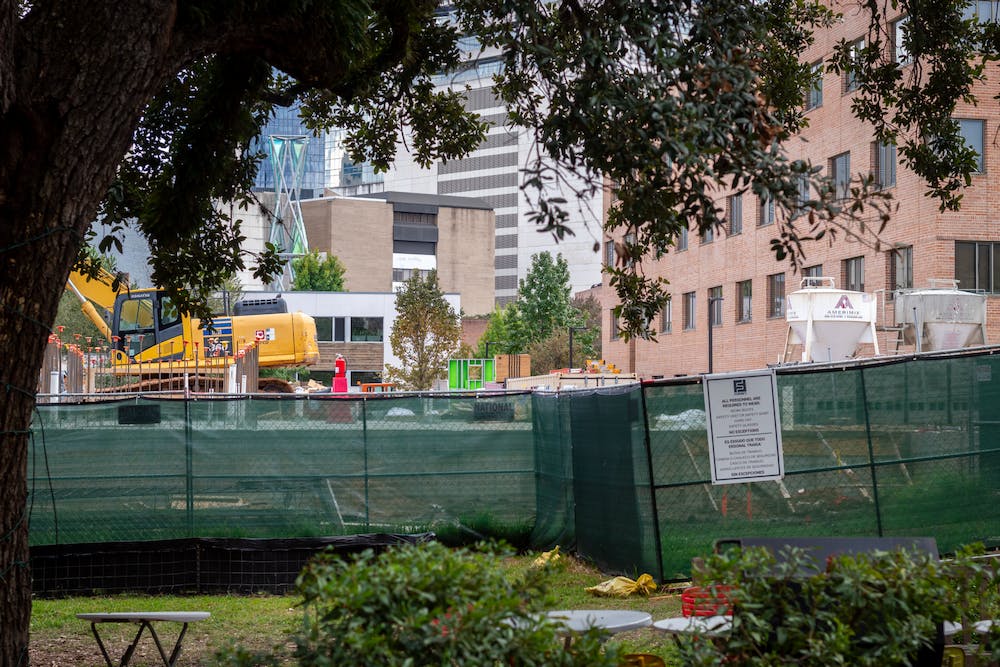 A new college wing is currently under construction for Hanszen College. According to the Rice University website, the building, which will be 4.5 stories tall including 164 beds, is slated for completion in July of 2022.

Mark Ditman, the associate vice president for Housing and Dining, said he originally worked alongside a team to promote the new wing’s construction several years ago.

“I recognized the importance of a new wing for Hanszen some time ago primarily due to its lack of accessibility,” Ditman said. “Additionally, the building occupied a very large footprint for an urban campus that has limited opportunities for expansion. For these reasons, my staff worked with [Kevin] Kirby’s support to make the case for a new building.”

President David Leebron said Rice invests in the maintenance and renewal of the residential colleges every year, which includes periodic major renovations and replacements, and that the new Hanszen wing was among the highest priorities over the last few years.

“The decisions are based on many factors, including feedback from our students,” Leebron said. “We’re appreciative of the valuable student input we have received both in making the new wing a priority and in key aspects of the design. I’m excited by the features of the new wing and think it will be a fantastic addition to Hanszen College.”

Ditman said that the new wing is being constructed now because, previously, it did not make financial sense for the university.

“Baker [College], [Will Rice College] and Hanszen all had wings built in the 1950s. All three had similar issues around accessibility and very large footprints,” Ditman said. “I think the rooms were actually quite nice, but the cost of making them accessible, in addition to substantially upgrading the rest of the buildings, did not make economic sense.”

“When planning this project, we were thinking about climate change, and the need to approach the design from the perspective of selecting materials with the lowest possible climate impact while still meeting our performance needs,” Johnson said. “That led us to use mass timber as a primary building material.”

Johnson said Rice’s School of Architecture is a leader in mass timber research, so he and Ditman were eager to translate that expertise into this project.

“Once the project is finished, it will be one of just a handful of mass timber buildings in Texas, so it will certainly be viewed as a cutting-edge green building,” Johnson said.  “We also hope that students will see this project as a visual symbol of [Rice’s] ambition to be a leader in campus sustainability and sustainability research at Rice, and that it will inspire them.”

Johnson said that the timber-based building, the first of its kind at Rice, was considered an unorthodox approach.

“Any time you’re proposing to do something unconventional, you have to be prepared to devote the additional time necessary to convince the appropriate stakeholders,” Johnson said. “That’s exactly what we had to do with respect to selecting mass timber for the Hanszen project. The second mass timber project at Rice will be easier to do than the first, and hopefully our experience at Rice will make it easier for others elsewhere to do their own mass timber projects.”

In addition to proposals from administration, student leadership at Hanszen have worked in student-led committees aimed at making decisions about various aspects of the new wing. Morgan Seay, Hanszen president, said she was involved in organizing Hanszenites into these committees, including one that played a role in picking an artist to create an original art piece for the new building. That student-led committee worked to narrow down a list of artists, which was then voted on by all Hanszentites. Eventually, Magdalena Fernandez, a Venezuelan artist, was selected to create an original piece.

“The piece that will be in the new section is called Fragmented Sky,” Seay, a senior, said. “It’s a beautiful artwork that’s built into the tiles that are going to be outside of the new section. Essentially, the artwork reflects everything from the sky back upwards so that you can see the sky on the ground.”

Marc Armeña, a Hanszen sophomore, said he appreciated the new wing’s focus on common spaces in building up Hanszen’s culture.

“I think the design choice of concentrating little common spaces closer to the main commons was a really smart maneuver on the part of the architects … I would say this decision process was made with the intention of strengthening Hanszen’s already strong commons culture,” Armeña said.

“Hanszen is a college where we are proud of our strong culture, but it’s always kind of a caveat that the facilities have typically been lacking,” Seay said. “I’m happy that we’re going to have this very nice, new building that’s going to be introduced … It will provide a space where more Hanszenites are comfortable and excited about living on campus.”