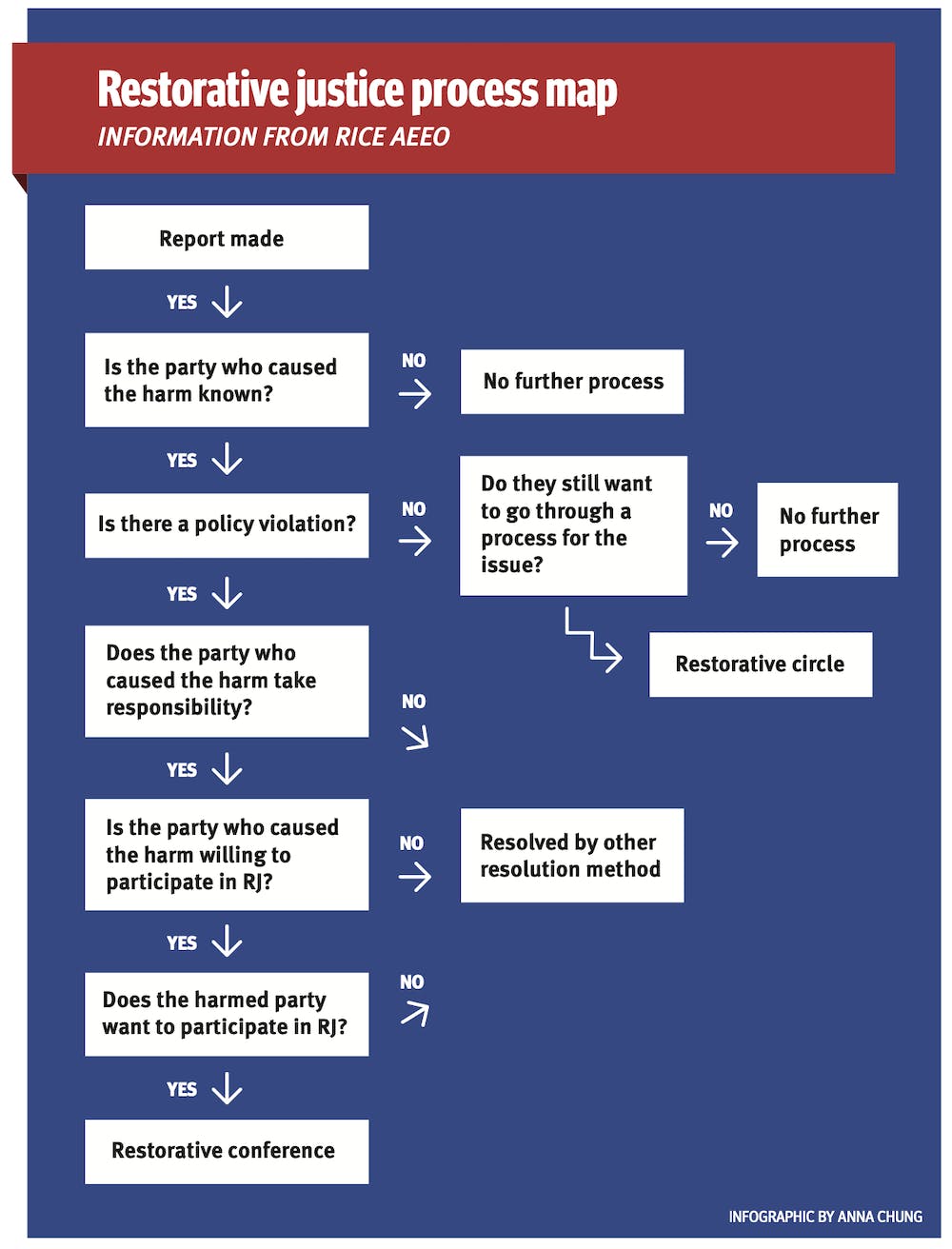 Rice began offering restorative justice as an alternative option for informal dispute resolution this fall semester, according to Olivia Hernandez, equal opportunity specialist for the Office of Access, Equity and Equal Opportunity.

Restorative justice will only be provided as an option for cases that are appropriate for resolution as defined by Policy 828, according to Hernandez.

Conversations about implementing restorative justice as an alternative option began when Title IX rewrites occurred over the summer in response to the Department of Education’s Title IX changes, according to Anastasia Newheart, president of Graduate Students Transforming Rice Into a Violence-Free Environment. Newheart said that the addition of the live hearing requirement under the Trump administration caused concerns among students.

“People were really concerned about that being a deterrent,” Newheart said. “Though I have been interested in [restorative justice] for a few years, so this is something that I thought would be beneficial to Rice.”

“For sexual assault cases, particularly ones that involve a lot of violence, right now, restorative justice would not be an option for that,” Hernandez said. “For example, if it’s sexual harassment and people sent texts that bothered someone, maybe that’s an [restorative justice] case.”

Restorative justice involves both the party who was harmed and the one that caused the harm to engage in a conversation with a trained facilitator, according to Hernandez. Both parties must agree to participate, and the one who caused harm must take responsibility for their actions, which is not a requirement under the formal resolution process.

“The person who was harmed is able to say what they think the correct way to repair the harm is, and then the facilitator and the parties work to create this agreement on how to repair the harm,” Hernandez said.

Hernandez said that she hopes that within the next few semesters, the restorative justice program will expand to take on more cases and other departments at Rice will implement the program, such as the Office of Multicultural Affairs.

The Committee for Intimate Partner Violence and Sexual Assault Prevention and Survivor Support is working with the AEEO to provide ongoing student feedback for the current restorative justive framework, according to Hernandez. Jacob Tate, IPVP director, said that the IPVP committee completely supports the RJ initiative.

Disclaimer: Jacob Tate is a senior writer for the Thresher Arts & Entertainment section.

“Our current [punitive] methods not only fail to create any kind of justice or resolution for victim survivors but also require retraumatization in the name of ‘proof,’” said Tate, a Sid Richardson College senior. “Additionally, punitive methods cause responding students to double down and not consider the harms of their behavior, meaning that when they are typically found innocent, there is no instance of rehabilitation.”

At this point, the AEEO does not plan on using restorative justice with cases that involve higher degrees of violence because of the retraumatization that may occur as a result, Hernandez said.

“When you get into a position where you’re using restorative justice for cases that involve a higher degree of violence, you’re running a higher risk of victimization and particularly increasing the trauma of the situation,” Hernandez said.

“If we had a facilitator who had the appropriate experience to deal with that kind of traumatic situation, I would want to have that as an option for survivors,” Newheart said.

Tate said that the IPVP committee and others working on restorative justice are working to ensure that the process does not produce greater harm.

“Our committee and other individuals working on [restorative justice] are working to ensure that this voluntary process neither retraumatizes accused students nor lets responding students off the hook for their harms,” Tate said.

Newheart said that she understands why students may be hesitant to use restorative justice as a resolution method because it is a new process that is very different from the traditional punitive system.

Newheart said she believes more educational outreach needs to be done to inform students about this process and exactly how it works. Newheart said that some people may not be comfortable with restorative justice as an option, so it is never going to be forced onto students.

“I totally understand that for some people this just may not be the right option for them, and I respect that,” Newheart said. “This is going to be totally situation and context dependent. The point here is to give someone more options not to pressure them into doing something [they are] not comfortable with.”