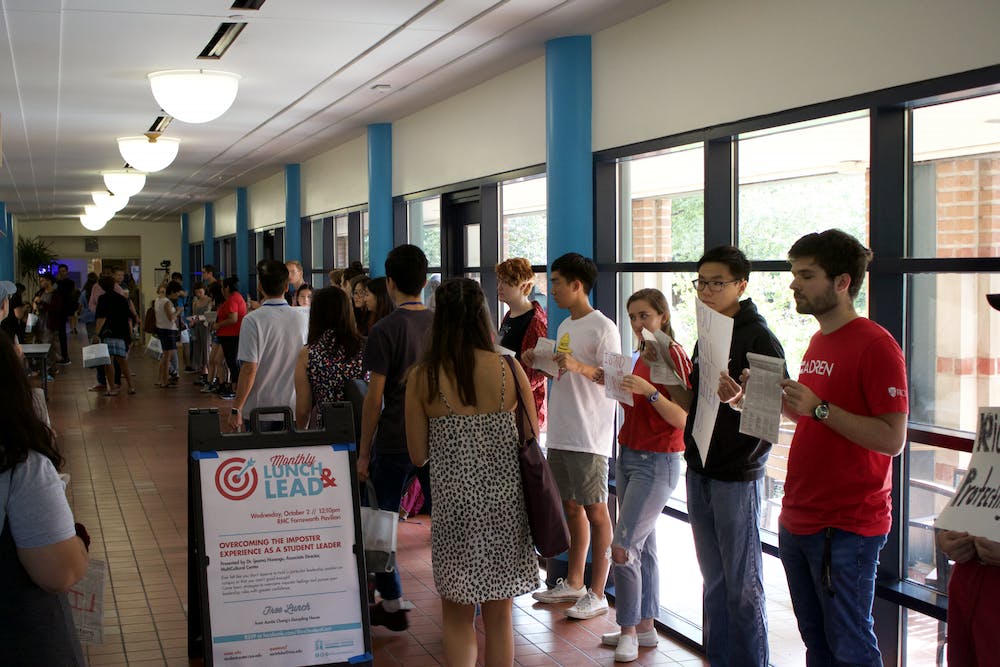 Students participate in a silent protest that took place on Sept. 27, 2019 in response to the mishandling of a sexual assault case. Channing Wang/Thresher

According to the Department of Education, the regulation redefines sexual harassment to be “unwelcome sexual conduct” that is “severe, pervasive and objectively offensive,” a narrower definition than past guidelines. The rules clarify the definition of sexual harassment to include dating violence and stalking in addition to sexual assault and discrimination.

The regulation also provides controversial new investigation and adjudication procedures, including live hearings and cross-examination. According to the regulation, these procedures aim to emphasize due process to ensure that “every survivor is taken seriously” and that “every person accused knows responsibility is not predetermined.” The procedures, which expand the rights of accused students, have been the source of growing national opposition, including a recent lawsuit by the American Civil Liberties Union, and the concerns of Rice students since they were first proposed in 2018.

Rice is currently working to understand the complex and nuanced requirements and construct plans for implementation. According to an official statement by Rice University, “crafting policies and procedures that comply with the regulations will obviously be a priority in the coming months, but that priority will not be overshadowed by Rice’s commitment to act in the best interest of our students.”

Richard Baker, Rice’s Title IX coordinator, said that the process of complying with the regulation not only involves formal policies and programs but also requires an understanding of the impact on the community. Colleges and universities are required to comply with the new rules by August 14, according to the Department of Education.

“We also have to look past August 14,” Baker said. “The training process is critically important. When people come back to campus in August, we must communicate the expectations of our policies, but also, the behavior that we expect of everyone regardless of the mandates.”

The Student Association and Students Transforming Rice into a Violence-free Environment coalition released a joint statement urging Rice to maintain a broader definition of sexual harassment and choose procedures that mitigate the harm for survivors when it can. More than 400 Rice community members had signed the statement at the time of publication.

“We are committed to due process and fairness and believe that these new measures do little to effectively promote these values,” the statement said. “We believe that the new regulations have the potential to damage survivors and limit their access to justice.”

The statement calls upon the university to maintain the “preponderance of the evidence” standard for cases rather than adopt a higher standard of “clear and convincing evidence.” Izzie Karohl, director of interpersonal violence policy in the SA and one of the statement’s writers, said the higher burden of proof is often not accessible and perpetuates myths that survivors lie about and exaggerate their claims.

Karohl said that the requirement for live hearings and cross-examination could be “incredibly difficult and re-traumatizing for any survivor.”

“Under the past rule, the reporting and responding students gave statements and reviewed evidence at different times,” Karohl, a Will Rice College junior, said.

In an effort to reform the procedures, the statement encourages Rice to default to hearings in separate rooms and video technology, as well as offer trained advocates for survivors who cannot afford to hire outside legal representation.

The statement also urges Rice to commit to 60-day case timelines, implement an internal mandate system and continue investigating claims of off-campus violence, although the new rules do not require universities to do so.

Maddy Scannell, STRIVE executive director, said that she and the other writers want to avoid a decrease in the number of sexual harassment reports.

“The reporting process is already challenging for survivors, so making sure it is safe and accommodating for anyone who has experienced a Title IX violation is really important to maintaining the Culture of Care at Rice,” Scannell said.

One of the biggest aims of the statement is to raise awareness about Title IX and sexual harassment policy among the Rice student body, according to Anna Margaret Clyburn, SA president.

“We hope that this is reaching all students. We want people to be informed and realize that they have a stake in this too,” Clyburn said.

The current pandemic augments the challenges already presented by the short 90-day implementation timeline, especially for gauging stakeholder opinions, according to Baker.

“Normally we would have town halls. We would go to colleges and meet with students. We may not have the in-person opportunity to do that, but we will develop a method to do that virtually as best as we can,” Baker said.