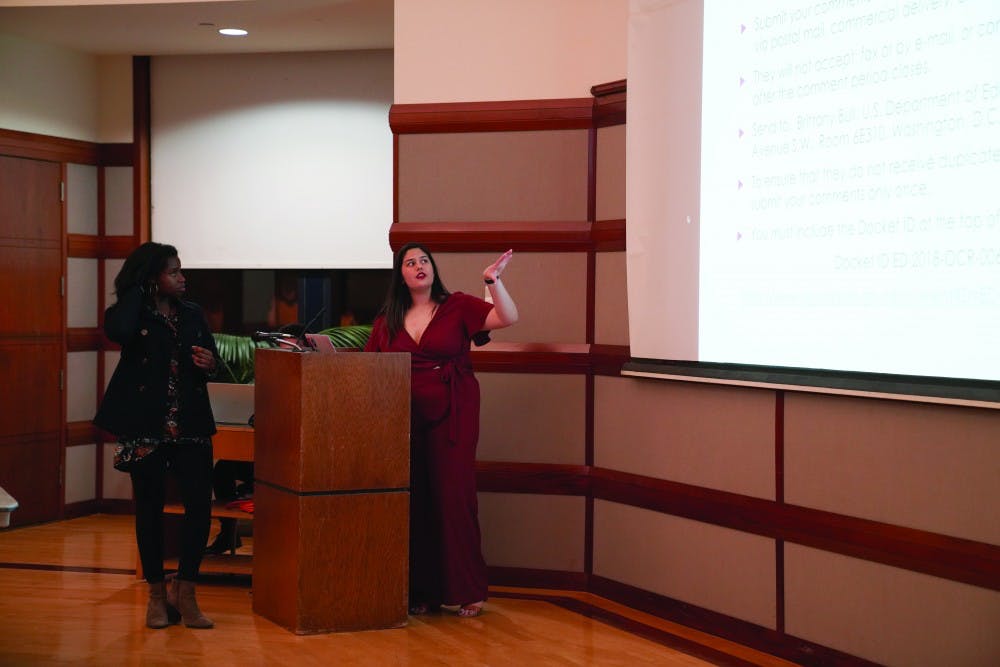 Update Jan. 18: The comment period has been extended to Jan. 30 due to a temporary problem with the Federal Register website, according to Rice Director of Government Relations Nathan Cook. The website is functional as of Jan. 18 at 11 a.m.

The Student Association Senate introduced a resolution to submit a public letter to the Federal Register expressing Rice undergraduates’ opposition to the Department of Education’s proposed Title IX changes at the SA meeting on Monday.

The resolution is open to campus-wide discussion for two weeks before it goes to a vote on the last day of the public comment period for the proposed Title IX regulations, Jan. 28, according to SA President Ariana Engles.

“The comment period closes on Jan. 28 11:59 p.m. Eastern Standard Time, 11 p.m. Central Standard Time, and Senate is 9 p.m.,” Engles said. “We’re cutting it close, but if it gets voted down or discussion continues too long, we can still at least send it to our elected officials. At the very least, we have that discussion and we have that awareness.”

How the changes would affect Rice is impossible to say, since the final version of the proposal is unclear, and what is included now is highly vague, according to Director of the Office of Sexual Violence Prevention and Title IX Support Cathryn Councill.

“If [the regulations] are approved, there will be many people at Rice involved in making adjustments in order to follow any new guidelines,” Councill said. “No matter what regulations we must follow, there will be options for reporting interpersonal violence and our office will continue to be committed to supporting students who experience interpersonal violence and empowering them with options and resources.”

According to Brown College President Taylor Morin, the letter included in the resolution primarily critiques three aspects of the proposed regulations: the cross-examination requirement, the geographical limiting of Title IX coverage and the shift in the standard of evidence in Title IX proceedings from “a preponderance of evidence” to “clear and convincing” in order to convict.

“The language of this is written very much in response to why we felt the changes were proposed in the first place,” Morin said. “Not only do we disagree with the moral and ethical parts of it, but in particular, to try and catch the attention of the Department of Education, a lot of what we wrote in this was talking about why from a legal perspective these changes actually don’t make sense.”

The changes to the Title IX guidelines, now called regulations, were proposed at the end of November, with only a two-month comment period, making it difficult for students to organize a response, according to Sid Richardson President Sara Meadow.

“By educating people on the proposed changes and the comment process, we want to encourage and empower people to have their voices heard by the [Department of Education],” Meadow said. “Given that the public only has 60 days to comment on these changes, the timing of the release makes it very difficult for students to educate themselves on the changes and learn how to navigate the confusing commenting process.”

Some of the proposed changes include relaxing sexual assault reporting requirements for a number of university personnel, requiring universities to include a cross-examination of the accuser in their investigation of reported incidents and limiting Title IX protection to immediate educational environments, among others.

Last Wednesday, Engles, Students Transforming Rice Into a Violence-Free Environment (STRIVE) and the Office of Sexual Violence Prevention and Title IX Support organized the “Your Voice, Your Comment” event, where students met with staff from the Office of Sexual Assault, the STRIVE executive team and Rice Director of Government Relations Nathan Cook to learn and discuss the proposed changes, according to Engles.

“While we didn’t have a huge attendance, we’re working with the STRIVE executive team to implement a more effective college-by-college approach that will hopefully encourage as many students as possible to learn about the changes and comment,” Engles said.

According to STRIVE liaison Daisy Gray, an increased burden of proof placed on accusers by the proposed regulations would result in the accuser’s assuming an unfair share of risk.

“When it’s a civil system, both students theoretically have something to lose,” Gray said. “The surviving student believes their education will be severely impacted if they have to stay on campus with their abuser, whereas the accused will lose some opportunities if they are found in violation of the sexual misconduct policy. The clear and convincing evidence standard puts a higher burden of evidence on the surviving student, thereby making their access to education more difficult than the responding student’s.”

According to Engles, many of the proposed regulations, like the cross-examination requirement, will cause trauma to the accuser without making the process more equitable.

“Cross-examination brings so much extra complexity to what you have to go through,” Engles said. “In many ways, these regulations will provide extra clarity where there wasn’t clarity before, but they will also reduce the autonomy of the institution to really fit to its needs.”

However, Engles said that others may view the structural clarity offered by these changes as a boon, ensuring greater fairness in Title IX proceedings, so frank and widespread discussion of the resolution will be crucial.

“This is something that is politically charged, which means that people will have a variety of different opinions on it,” Engles said. “Some people at Rice will probably think that cross-examination is something we needed a long time ago, and other people might think that this is the worst idea they’ve ever heard. We want to hear that; we want to know that.”