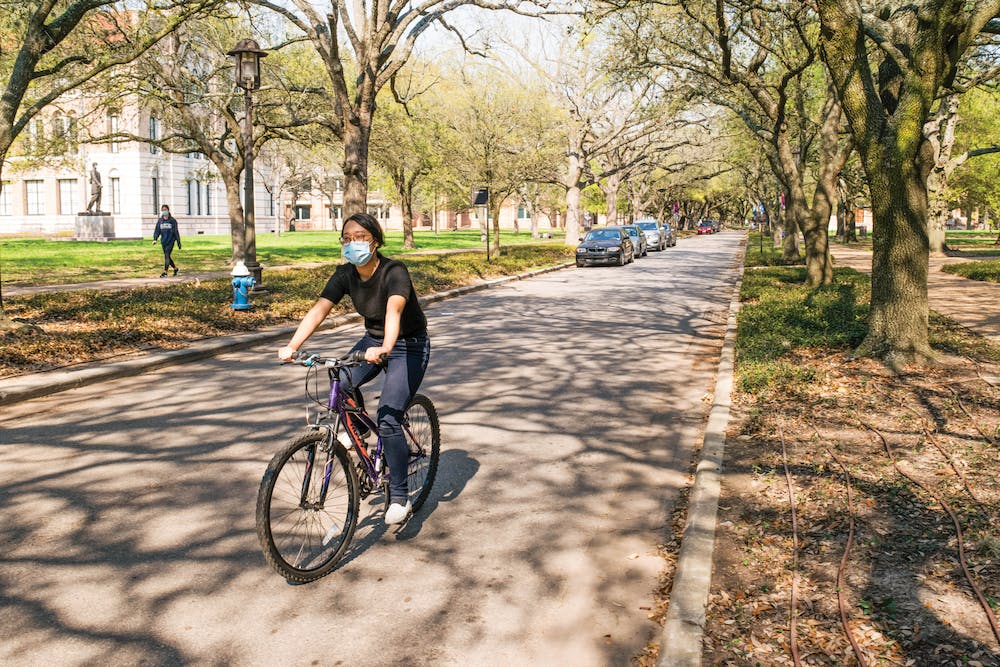 According to Lisa Lin, transportation demand management manager, the university’s previous designation expired this year. Since then, the university was able to improve the application with more student engagement activities related to biking over the past few years.

“[In terms of] the programming aspects and encouragement side of things, I feel like we did tremendously well,” Lin said. “Starting with different student engagement activities, what Rice Bikes does, what the [Graduate Student Association] has done in terms of advocacy, not just on-campus but also off-campus efforts.”

The GSA sent a letter to Houston Mayor Sylvester Turner in 2018, asking for safety improvements at intersections they defined as dangerous. These included Entrance 20, Holman Street and Hawthorne Street, Morningside Drive and Holcombe Boulevard, and Kirby Drive and McClendon Street.

The Houston Bike Share stations, installed four years ago, were also a new part of the application. Lisa said that engaging students by offering memberships and trials to the bike share were a large component of this year’s application.

Based on input from other universities with Bicycle Friendly University designations, Lin said this year she worked on building the supplemental section of the application with help from her summer intern, Trisha Gupta. Together, they worked to capture the progress made towards becoming a more bicycle friendly campus over the last four years.

Gupta said she gathered data about bike usage around campus and assessed aspects of university spaces that were bike friendly, to draft qualitative arguments as to why Rice has a strong bike culture and is bike friendly.

“I think that as of this application we’ve developed more infrastructure that promotes bike usage, especially with the addition of BCycle stations around campus,” Gupta, a Sid Richardson College junior, said. “We also have a lot of plans for the future now that we’re coming out of the pandemic, which the application process takes into consideration.”

Lin said that receiving a designation as a BFU will hopefully jump-start more initiatives for the university to get to the next designation level.

“I think with each additional increase in designation, it still makes us reach even further and higher in terms of making Rice really bike friendly,” Lin said.

Gupta said that the university can still make improvements by making the roads more bike-friendly, including creating a safer way for bikers to get around the inner loop, a one-way loop with no designated bike lane.

“This makes it more dangerous and uncertain for [bikers] to use this road to get around campus, and roads leading into and surrounding campus similarly don’t have provisions for bike usage,” Gupta said. “I think that students and bike-riders around the university in general want to see more accessibility for bikers on the roads themselves.”

Lin said that while it is important to ensure the safety of bikers at Rice, it is equally important to make sure that the connections leading to campus are safe. Lin said there is an ongoing conversation with city officials and members of the Rice community regarding biker safety in roads connecting to campus frequented by Rice bikers.

In July of 2020, Turner unveiled safety improvements for bikers at the intersection of Sunset Boulevard and Main Street, where two cyclists were previously hit and killed. These changes included removing the right turn on Sunset Boulevard, added median and pedestrian signals and color-coded crosswalks.

Sudipta Roy, wife of Rice postdoctoral research associate Ujjal Bhattacharjee, was struck and killed while riding her bike outside the university’s main entrance in April 2018, and physics professor Marjorie Corcoran was fatally struck by a light rail train while biking across the tracks on Fannin Street in February 2017.

According to Richard Johnson, executive director for sustainability, the city adopted the Houston Bike Plan in 2017, which envisions bike lanes around the entire campus perimeter and into adjacent neighborhoods. While Rice is supportive of the city’s plan, Johnson said that adding bike lanes on Rice’s campus is a decision that requires planning.

“We realize bike lanes might very well be a solution for certain areas and places on campus, but this issue requires holistic thinking, careful planning, engagement with stakeholders and coordination with what’s happening beyond our campus,” Johnson said.

Johnson said that Rice is considering the potential implementation of a bike master plan, which would include thinking further about bike lanes as well as associated amenities, policies, education, enforcement, safety and security measures and even some places that might be off-limits to riding bicycles.

Going forward, Lin said she hopes to see an increase in accessibility of bikes for students in need, and that she plans to do this with pilot bike share memberships in the future.

“In terms of providing access to the shared bikes for students who might not need a bike all the time or [those who] might not be able to afford their own membership, [we are] looking at different models to help get that access and lower barriers to entry for that.”