​Rice interfaces with City of Houston to improve transit safety 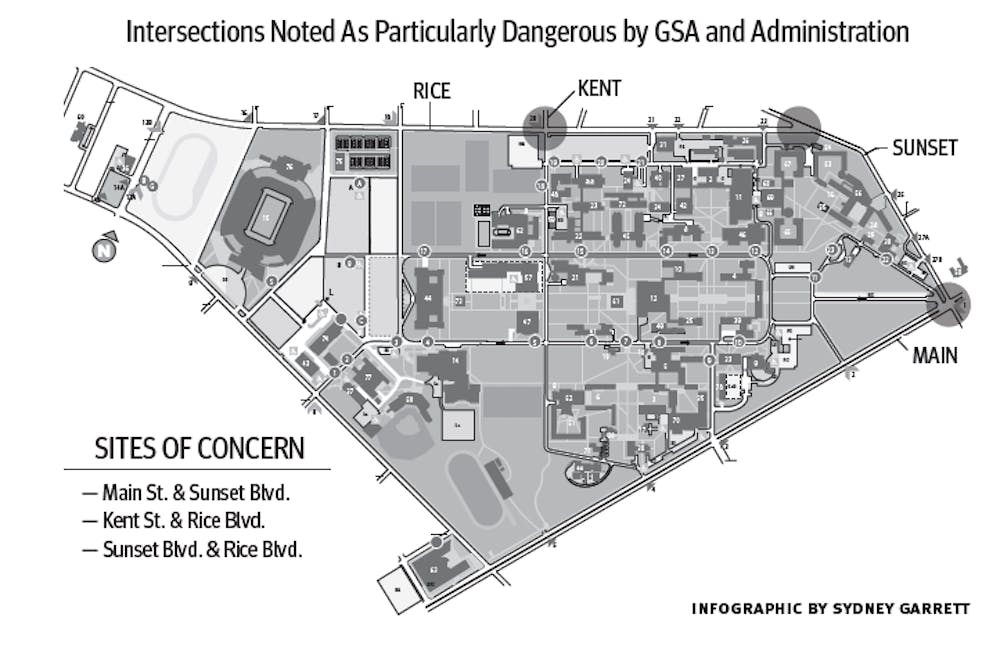 The City of Houston responded to letters of concern regarding bike safety near Rice’s campus, raising uncertainty over the future of improvements for cyclists.

Both letters, from the Graduate Student Association and President David Leebron, pointed to Entrance 20 at the intersection of Rice Boulevard and Kent Street as particularly concerning.

Leebron sent a letter to Mayor Sylvester Turner and City Council Member Ellen Cohen on July 23 asking the City of Houston to assist the university in implementing several traffic improvements in the surrounding area.

The requested improvements include installing a traffic light and highly visible crosswalks at Entrance 20, which Leebron said Rice is willing to fully fund, as well as expediting improvements for the intersection at Main Street and Sunset Boulevard and redesigning the intersection of Sunset and Rice to a roundabout design.

“The most exciting part is that Rice offered to pay for a major overhaul of [Entrance 20] which could be as much as $250K if a traffic light is chosen,” Mary Natoli, a graduate student and president of Rice University Cycling and Triathlon, said.

However, the City of Houston’s response, sent on Aug. 8, did not address Leebron’s offer of funding.

Director of Transportation and Drainage Operations Jeffrey Weatherford wrote in response to Natoli and Guo that Entrance 20 is not in the city’s list of the top 10 dangerous intersections, but “if funding becomes available, [HPW] would certainly consider [the] proposed improvements.”

Safety implementations for various other locations, such as the intersection at Kirby Drive and McClendon Street, are either low on HPW’s priority list or lack available funding, according to Weatherford. HPW is studying the intersection at Holman Street and and Hawthorne Street and Weatherford said recommendations to enhance safety should be available in the next six to eight months.

According to Director of University Relations Greg Marshall, Houston Public Works, METRO and multiple area stakeholders including Rice have also been involved in meetings for several months to address needed safety improvements at the intersections of Sunset and Fannin and Sunset and Main, where two members of the Rice community have been killed while bicycling in the past two years.

“There was talk at one recent meeting of possibly executing an interlocal agreement, whereby METRO could pay for some of the changes but the city would handle construction; it was believed that this could shorten the construction time frame,” Marshall said.

Marshall said he could not speak for the city on whether that interlocal agreement is going to happen, nor what the timeline for construction might be.

In May, Rice’s Mobility Safety Committee submitted a document to Vice President for Administration Kevin Kirby containing recommendations for improving bike safety on campus such as developing a counterflow bike lane on the inner loop and a two-way bike and board path through campus between Brochstein Pavilion and Fondren Library.

Richard Johnson, the chair of the MSC, said Kirby is preparing an update for the campus community including a description of specific measures that will be implemented shortly, others that will be examined more thoroughly and the status of conversations with the City of Houston and others about mobility safety along the campus perimeter.

“Many of the recommendations have been assigned to specific departments at Rice for implementation or further action,” Johnson said.

Beginning in June, Student Association President Ariana Engles worked with Natoli, Guo and GSA officer Jordan Metz to produce a video on bike safety that was shown at Graduate Student Orientation and the first SA senate of the school year. According to Engles, Rice’s Entrance 20 is graduate students’ greatest concern, and having a streetlight put up is their number one priority.

“My personal hope and goal is that the city council will really start to hear student voices and, hopefully, we want a traffic light at Kent and Rice, at Entrance 20,” Engles, a Lovett College junior, said.

MSC members have suggested several safety improvements that the university could implement immediately and cheaply, such as restricting the directions that vehicles can exit campus to right-turn only, but nothing has been done yet, according to Natoli.

“Rice has taken these important steps, including contacting the city and offering to pay for things, and I think this is great and I acknowledge that many of the concerns will require cooperation with the City, which is always a long and arduous process,” Natoli said. “However, I still think that Rice should do what they can in the meantime.”