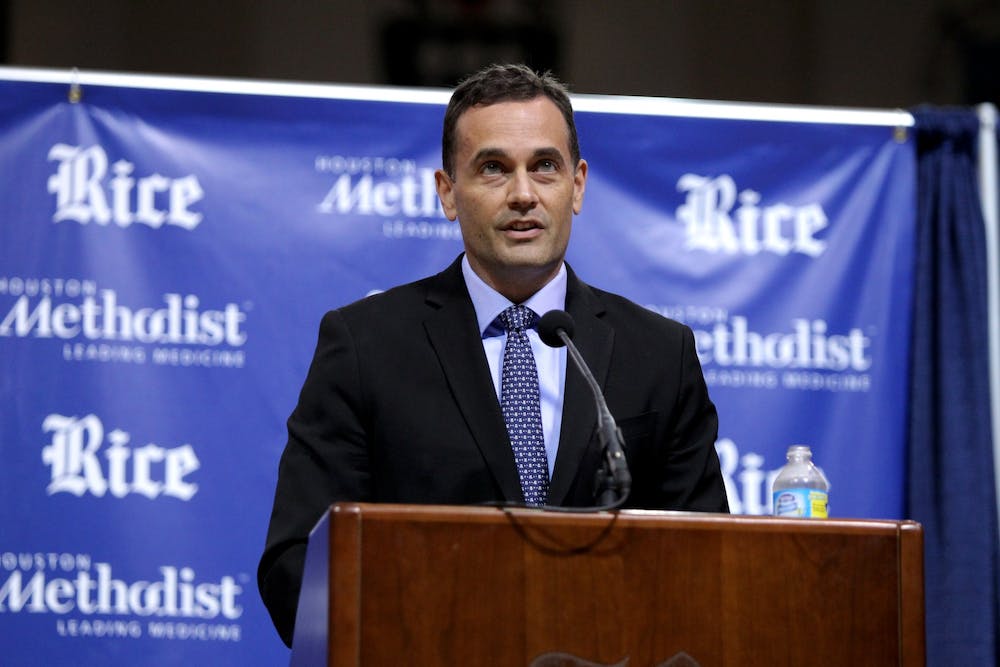 Athletic director Joe Karlgaard describes himself as someone who likes challenges. But even he has found the past year and a half to be difficult.

“We’re coming off a really difficult year,” Karlgaard said. “But it wasn’t just difficult for us, it was difficult for everybody in college athletics and in higher education in general.”

While the pandemic was a challenge to all college sports programs, Karlgaard said that Rice was at a disadvantage because they took it upon themselves to maintain higher COVID-19 safety protocols than many of their competitors.

“We were challenged because our university had a really high bar when it came to protecting the community,” Karlgaard said. “We weren’t always necessarily in lock step with Conference USA. Because our bar was higher than a lot of other institutions with whom we compete, that made last year more challenging for us than maybe some other schools.”

But now, as Karlgaard looks back at one of the strangest and most difficult stretches of his eight year tenure running the Owls athletic department, he said that he is proud of how the Owls handled a less-than-ideal situation.

“I think we navigated the year extraordinarily well,” Karlgaard said. “Soccer and volleyball had great years. Women’s basketball won the [National Invitation Tournament]. So I felt like we really made lemonade out of lemons last year with the challenges that we faced.”

Karlgaard knows that Rice isn’t in the clear just yet. There are still pandemic protocols to follow and the recent surge of COVID cases driven by the Delta variant has increased the risk of positive cases among Rice student athletes. But according to Karlgaard, as COVID-19 cases go down, and restrictions and protocols ease, he is confident that Rice’s teams will be able to overcome the challenges of the pandemic and have a strong year.

“This year I feel like we’re 85 [percent] back to normal,” Karlgaard said. “It’s not quite all the way there, [but] I’m optimistic. I’m a realist, but I tend to be a little more optimistic, and I feel like this is setting up to be a great year for us.”

While the challenges of the pandemic are beginning to subside, this year has brought a whole new set of struggles for Karlgaard and his team. As the NCAA enters a phase of change, Karlgaard said that he and his staff can’t even begin to plan for the future.

“It’s tough to say nationally what this thing is gonna look like five [to] ten years down the road,” Karlgaard said. “We’ve got a constitutional convention coming up here in a month where the NCAA’s gonna propose rewriting the 43-page constitution. We’re in the middle of conference realignment discussions. You’ve got the [NCAA v.] Alston decision from the Supreme Court that came down in June, that essentially allows unlimited education benefits to student athletes. You’ve got [new name image and likeness rules]. You’ve got [recent changes to the transfer rules]. It’s tough to be too concrete with the goals that you have, when you just don’t know what the enterprise is gonna look like moving forward.”

Conference realignment in particular has turned into the biggest variable for the Owls, ever since news broke that the University of Texas, Austin and University of Oklahoma would be leaving the Big 12 for the Southeastern Conference, according to Karlgaard.

“That all started when I was on vacation this summer celebrating my wedding anniversary,” Karlgaard said. “I made the mistake of looking at my phone, and it said that Texas and Oklahoma are going to the SEC, and I thought: Here we go, it will have a way of trickling down.”

Conference realignment has been a top priority for the athletic department for Karlgaard ever since he joined Rice following a stint as a top assistant at Stanford, his alma mater. Despite his best efforts, Karlgaard said that he has never been able to find the right opportunity.

“I got here on the back side of the last round of realignment,” Karlgaard said. “I started in 2013, and 2012 was the year that [the University of] Houston, [Southern Methodist University], Tulane [University] and Tulsa [University] left Conference USA, and Rice didn’t. I haven’t seen an opportunity for us quite emerge over the past eight years, but now I think we’re in an environment where I think it’s highly unlikely that the status quo will be maintained.”

While Karlgaard said that improving Rice’s conference set up is his top priority, he cautioned against jumping to conclusions about what that means.

As talks start heating up, Karlgaard said he has a pretty concrete idea of what his pitch to other conferences will look like.

As for the athletic side, Karlgaard said it is a common misconception that Rice’s reputation won’t entice other conferences.

“This isn’t a well known fact, [but] if you look back since the reformation of Conference USA, we’ve won more conference championships than anyone else in [the] conference,” Karlgaard said. “We have the best overall athletic program in Conference USA based on that metric.”

In addition to all of the changes going on with the NCAA, this year has brought turnover for the athletic department at home as well. Rice had to replace two head coaches, as women’s basketball head coach Tina Langley left for the University of Washington and baseball head coach Matt Bragga was let go at the end of his third season. According to Karlgaard, while he was sad to see Langley go, he’s proud of all that she was able to accomplish in her six years at Rice.

“What Coach Langley was able to do in taking over the womens basketball program and really establishing it as a well respected national program is probably [the thing] I’m proudest [of during my tenure],” Karlgaard said.

As for Bragga, Karlgaard said that admitting that a hire isn’t working out is always tough, but the pandemic made it clear that Bragga didn’t fit at Rice the way he had intended.

“That was tough, I really like Matt, [and] I think he’s a really good baseball coach,” Karlgaard said. “The last year and a half here has just been challenging. You have to be a highly adaptable person who’s able to see how Rice [was] going to maneuver it’s way through the pandemic and I think that was challenging for Coach Bragga. Once you know that it’s not working in the way that you’d envisioned, it’s really a matter of admitting that and figuring out how you can move forward.”

To replace both of them, Karlgaard focused on finding candidates who he thought would understand and embrace the unique aspects of Rice, such as its small size and academic standards for its athletes, as he says he does with all of his hires. For baseball, this led him to hire a Rice alum in Jose Cruz Jr., while for women’s basketball he chose former North Carolina State University assistant Lindsay Edmonds. According to Karlgaard, he never knows which candidate will fit this profile.

“Sometimes it reveals itself in the profile and background of the candidate,” Karlgaard said. “Coach Cruz having played here, it’s pretty obvious – he went to Rice, he gets it. Coach Bloomgren, spending seven years as the offensive coordinator at Stanford, obviously had some sense of what it takes to do it at a high level. But then I think of Coach Tina Langley for example, and if you looked at her background prior to coming here, [none of the places she coached were] really like Rice – some fine schools, but not the small private school environment. But when we interviewed her, she articulated the values really well, and it became apparent to us that she knew what we were about.”

“I got into this work because I like the strategic aspect of it, I like the big picture thinking, I like to figure out how the pieces fit together,” Karlgaard said. “Rice is a challenging environment because we’re a small school with a small alumni base in a big city that’s saturated with sports. [On top of all that], we have high academic standards. But I think those are the fun [parts of the] job. It’s maybe not as much fun if you’re at a place like Ohio State [University] or [the University of] Alabama where you have big fan bases, big alumni bases and lots of resources to do your work. Here, you have to figure out how to outmaneuver folks to have success.”