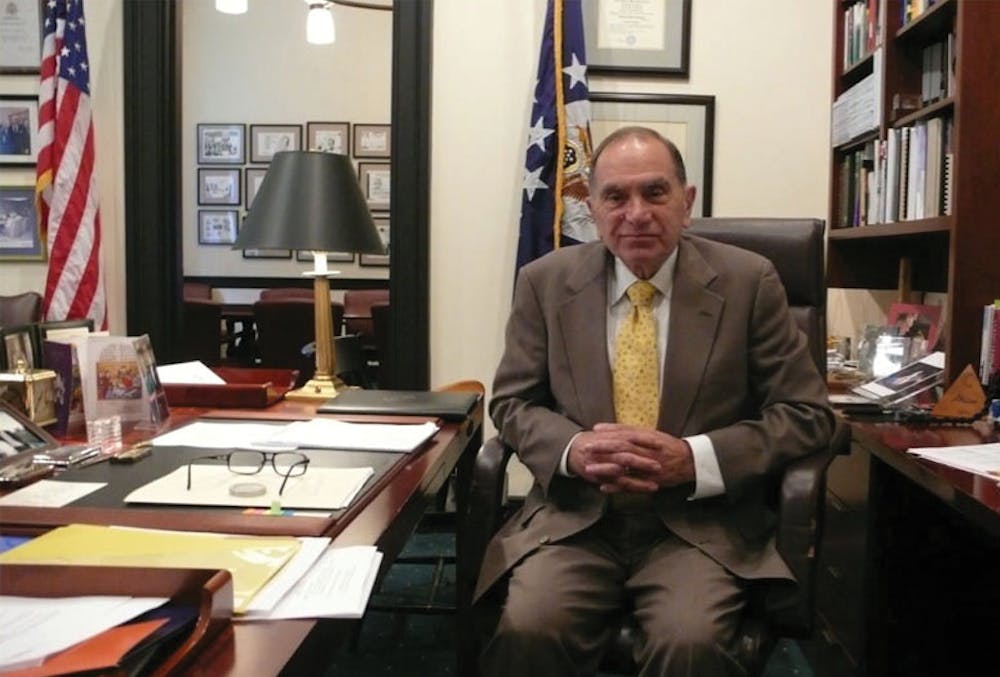 The former U.S. Ambassador to Israel, Djerejian said that when he was approached in 1994 by former Secretary of State James A. Baker III, the namesake for the institute, he was conflicted.

“At the time, I was not interested in leaving the foreign service,” Djerejian said. “I knew nothing about Texas and very little about academia … but [my wife and I] asked ourselves, ‘How many times in one life do you have the opportunity to create something from the ground up?’ It was a roll of the dice, and we took it.”

Founded in 1993, the Baker Institute was recently named by the University of Pennsylvania as the best university affiliated think-tank in the world in 2020. President David Leebron said he has appreciated working with Djerejian and the Baker Institute throughout his time at Rice.

“It has been a privilege working with Ed Djerejian and Jim Baker,” Leebron said. “It would be hard to imagine accomplishing much more over this time period. [The Baker Institute] has truly become one of the jewels of Rice University.”

When the Institute was just getting started in the mid-1990s, Djereian said that a decision was made early on that the institute be non-partisan and only issue policy recommendations based on data. Additionally, he traveled to numerous policy centers at some of the top universities in the country to see how they conducted their operations.

“I came back [from those trips] and I was intimidated,” Djerejian said. “They were doing all these great things and had been around for a long time … so one major decision I made was that we weren’t going to imitate any other institution, but we were going to base our programs on the principle of comparative advantage.”

According to Djerejian, each center the Institute has created was developed because of a specific advantage — geographical, specific expertise or otherwise — they hold over similar think tanks.

With Houston being known as the energy capital of the world, Djerejian said that one of the first programs he established was an energy forum, which evolved into the Center for Energy Studies.

According to Djerejian, the other aspect of comparative advantage he sought to utilize was the Institute’s proximity to the Texas Medical Center, which led to the creation of the Center for Health and Bioscience.

The idea of comparative advantage also led to the creation of more centers in recent years. According to Djerejian, the Center for The Middle East was born from his and Baker’s knowledge of the region after spending decades in foreign relations. By the time Leebron took over as Rice’s president in 2003, the Baker Institute had been in operation for nearly a decade.

The final aspect of the initial model for the Baker Institute was the integration of the Baker Institute into the Rice community. According to Djerejian, this was accomplished through reaching out and providing opportunities to faculty and students at Rice, including both graduate and undergraduate students.

One aspect of a typical think tank that Djerejian and Baker explicitly avoided was establishing the Baker Institute as a speakers bureau.

“We didn’t establish the Baker Institute as a speaker’s bureau, or as one of our main objectives to have people come here and speak, because the main focal point of our work is the research and recommendations that our fellows and scholars make on domestic and foreign policy issues,” Djerejian said.

Despite that, the institute has attracted numerous high profile speakers over the years. They’ve hosted five U.S. presidents, mostly recently Barack Obama, who was the keynote speaker at the Baker Institute’s 25th anniversary gala in 2018.

According to Djerejian, his favorite speaker the Institute has hosted is indeed a president — just not an American one.

“My favorite memory is when we hosted Nelson Mandela,” Djerejian said. “We were lucky to get him; we used every point of networking and influence that we had, and we got him here.”

According to Djerejian, interest in the Mandela event was so extensive that they had to host it in Tudor Fieldhouse. In front of over 6,000 people, including minority students bussed in from various Houston public high schools, Djerejian said that sitting across the stage from the former South African president was his favorite memory of his time at the Baker Institute.

“We’ve had presidents, we’ve had foreign ministers, we’ve had national leaders, Democrats and Republicans,” Djerejian said. “We’ve had notable people here, but when you ask me, what was the one event that sticks in my mind? That’s it.”

Now, headed into his mid-80s, Djerejian said that he felt the time was right to step away.

“We’ve gotten the institute to the point, beyond our expectations, as one of the leading think tanks in the world,” Djerejian said. “We’ve accomplished the lion’s share of the tasks we set before us, the institute is on a very strong foundation, and I think this is the moment for me to step aside and hand it over to the next generation of leadership to take it to new heights.”

The search for Djerejian’s successor involves a committee, co-chaired by Leebron and Marc Shapiro, chair of the Baker Institute Board of Advisors. The committee has begun their work trying to identify potential candidates, and the work will continue for several months, with more announcements expected in early 2022. According to Leebron, they expect the process to be relatively smooth.