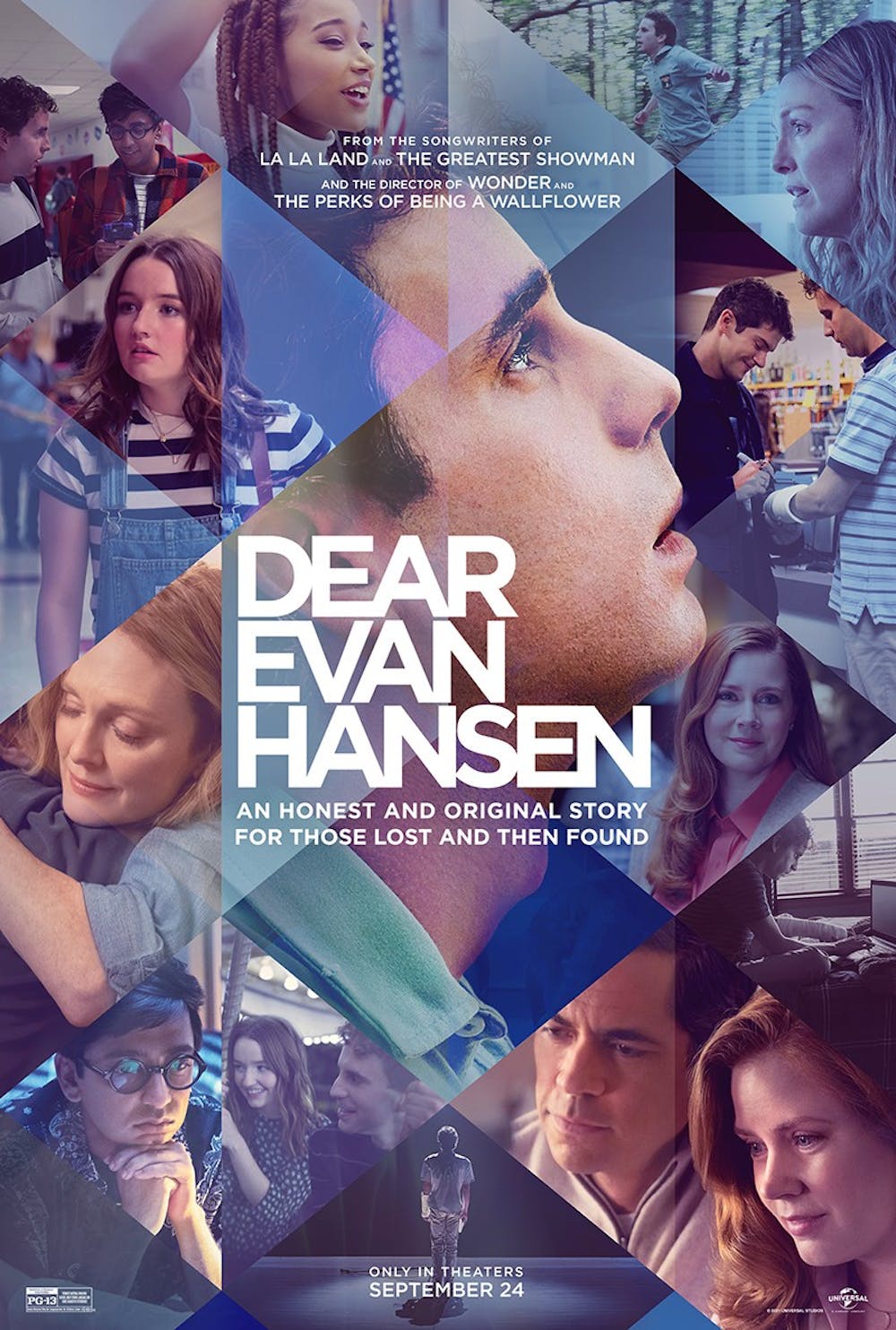 Adapted from the 2016 Broadway musical of the same name, “Dear Evan Hansen” is a  coming-of-age musical teen drama focusing on Evan Hansen (Ben Platt), a high school senior struggling with social anxiety disorder. The movie has an excellent soundtrack and skillfully depicts the experience of the Murphy family after Connor Murphy passes away from suicide.

Protagonist Evan Hansen struggles to make friends and function naturally in social situations. His therapist encourages him to write compassionate letters to himself.  However, Evan’s self-addressed letter, “Dear Evan Hansen,” is mistaken as Connor Murphy’s suicide note when Connor takes his own life. Thus Evan is seen as Connor’s only friend by the Murphys. Not willing to break the only “memory” they have of their deceased family member, Evan chooses to make up stories of their friendship using fake emails between him and Connor and gradually is accepted as part of the Murphy family. As part of Connor’s memorial service, Evan joined “The Connor Project” to raise funds and awareness of teen mental health issues. However, when Murphy’s family suffers from public backlash when Connor’s “suicide note” is released online, Evan chooses to admit that he was lying. This moment marks when Evan truly tries to learn about Connor and find some hope in coping with his own mental illness.

The soundtrack is well-arranged with familiar and new songs alike. Besides the more popular “You Will Be Found,” the piece that stands out to me the most is “Words Fail” sung by Evan when he confesses that he lied about his friendship with Connor to the Murphys. Listening to this solo piece, I understand Evan’s long-held desire for the companionship and compassion he lacked. I enjoyed the addition of “The Anonymous Ones,” sung by Alana, (Amandla Stenberg). Through the popular and seemingly collected Alana’s solo “The Anonymous Ones,” the audience witnesses the other side of her: a student suffering from both depression and anxiety who wishes to be seen and supported by people who also suffer. This song makes the characterization of Alana more complete, explaining why she goes against Evan’s request and posts Connor’s “suicide note” online for the final attempt of fundraising for “The Connor Project.”

The movie portrays Murphys’ grief in a deeply moving way. Through highly emotional music and moving acting, this family’s suffering and healing as suicide survivors gave me chills and brought tears to my eyes. When Evan first meets Connor’s parents Cynthia and Larry Murph, the couple appears well-mannered and reserved, but the close-up featuring Cynthia’s face after Evan hears the news conveys her struggle between her tumultuous emotions and maintaining her composure. Evan later confesses in the movie, “I have never seen anyone so sad before,” and this scene shows that even in its brevity.

“Requiem,” is the best part of the movie with excellent cinematography, the complexity of emotions and the large amount of information conveyed in short clips. “Requiem” shows Connor’s sister Zoe, Larry and Cynthia’s refusal to mourn for Connor for vastly different reasons. Zoe is shown speeding on an empty street in the middle of the night. When she nearly loses control of her vehicle but suddenly grabs the steering wheel back and brakes hard at a red light, Zoe sobs, singing, “Why should I play the grieving girl and lie?” Zoe refuses to mourn Connor as she remembers his tendency towards violence and how he caused her suffering throughout her life. This confession illustrates Zoe as “the other child” whose sibling constantly demands all of their parents’ attention.

Cynthia is shown sitting by herself on Connor’s bed, staring blankly in the darkness. She is reluctant to change the setting of Connor’s bedroom, refusing to let go of her memory associated with her son. Cynthia’s reluctance to mourn for Connor explains why she wants to hear Evan’s stories with Connor.

In his office, Larry hides his emotions, dressed professionally and walking through an office full of his colleagues. They all turn around to stare at him as he walks by. Larry’s visible anxiety shows how excessive attention and rumors impact grieving people. This scene foreshadows the public shaming the Murphys suffer later in the movie when people start to question why Connor left his “suicide note” to his friend instead of his family. From those scenes, the film emphasizes the power of social media as people’s comments could make “The Connor Project” successful in days and turn the Murphys’ life upside down in hours.

The movie is meaningful overall with must-listen music, and it depicts how teenagers and their families are impacted by mental health issues. “Dear Evan Hansen,” in the words of the trailer, is a “deeply emotional experience,” so remember to bring some tissues when you take your seat in the cinema.