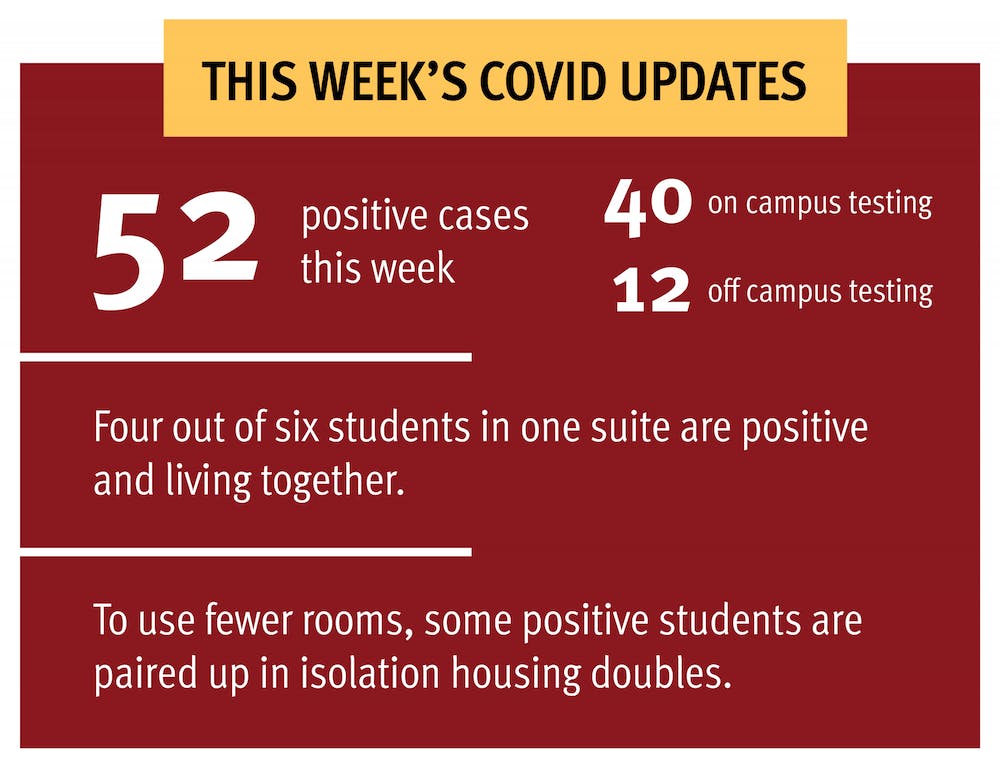 Editor’s Note: Some students who tested positive for COVID-19 were given the option of remaining anonymous in the interest of protecting private medical information. Anonymous students were given false names, which have been marked with an asterisk on first reference.

Between Aug. 22 and 29, 52 people tested positive for COVID-19, according to Rice’s COVID-19 dashboard, with 40 testing positive on campus and 12 through off campus testing. Approximately 30 percent of cases were traced back to one campus event, according to a campuswide email from Kevin Kirby, chair of the crisis management advisory committee.

32 of the cases were undergraduate students along with eight graduate students, three faculty members and nine staff members. Rice’s historical dashboard shows only a handful of Covid cases at this time in August 2020.

Some of the students who tested positive said they felt confused, alone and frustrated. Nabiha*, a junior, said Rice was not ready to confront the highly transmissible Delta variant.

“I literally don’t even know who I would call if I needed something right now,” Nabiha said. “I just don’t think that they were prepared for this … Delta has been too prevalent for too long for Rice to have not come up with a plan to train contact tracers.”

“From what I know, it does seem like they’re overwhelmed, which is frustrating,” Williams, who announced her positive COVID test in an email last week to Will Rice students, said.

Kirby said that crisis management is responding to the challenge.

“I wouldn’t say we’re overwhelmed, but we have a really high volume,” Kirby said.

That high volume of cases has put a constraint on Rice’s isolation housing. Williams said her contact tracers told her that isolation space was running low.

According to five students who tested positive, crisis management instructed some COVID-positive students to isolate together, sometimes in close proximity to healthy students. Jerusha Kasch, director of institutional crisis management, said some cases isolated together last year and again this year under limited specific circumstances, but did not comment about any specific cases.

Nabiha and other positive suitemates have had to share their suite with other suitemates who have not tested positive.

According to Kirby, Rice did not expect to need as many beds as they reserved for isolation last year, as there were never more than ten students isolating at one time in Old Sid.

“The Delta variant just two months ago was 10 percent of all the cases in the United States, and now it’s almost all of them,” Kirby said. “We weren’t setting aside a large swath of housing, like all of Old Sid, because we weren’t expecting that … We’ve been securing as many hotel rooms as we need.”

In another case, Chuck* and his suitemate, who both tested positive for COVID-19, were sent to a room sharing an internal door with a pair of healthy students, where Chuck said he believes he and his isolation roommate could infect their healthy neighbors.

“What I think [Rice] has done really poorly is … the proximity to normal students who were not exposed to COVID at all,” Chuck said. “We literally share a door with them, like we could walk in and unknowingly spread the virus. There’s a gap under the door that joins our rooms so we are breathing the same air.”

Kirby said some sick students are isolating in their own rooms, and their healthy roommates, suitemates or housemates were offered hotel rooms, although a healthy student living with isolating peers said their contact tracer never mentioned this possibility.

Greer*, another student who tested positive, said they were asked to share a bathroom with a student who did not have COVID-19.

“Once I got to [isolation housing], I realized I was sharing a bathroom with someone who was symptomatic, but non-COVID,” Greer said. “He was so scared … he didn’t even want to use the restroom. He’s like, ‘I’m just gonna hold it in for the next 12 hours.’”

Williams said that her housemate booked an Airbnb to distance from Williams and her other sick housemates.

“[Rice was] kind of like ‘yeah, we don’t know if we’ll have any room for you to come on campus,’” Williams said. “He had to book an Airbnb … I think they’re going to try to see if Rice could pay for it, but there’s definitely no offer to pay for it from the university.”

Kirby said he was not aware of specific situations with students’ isolation housing, nor was he aware of the number of open isolation beds, if any. Kasch said Rice does not know how many isolation beds are open because they are evaluating Rice community members’ return to campus.

Chuck, Nabiha, Greer, and Adrian* said they relied on at-home rapid testing kits in addition to Rice-provided PCR tests. Adrian, a senior, said they had heavy exposure to two positive cases, which they said prompted them to continue rapid testing after a negative PCR test. They later tested positive on a rapid test.

“Four of us pretty much had to use the rapid test as our only source because our PCR test came back as negative,” Adrian said.

Nabiha pointed to the difficulty of scheduling PCR tests as one of their reasons to rapid test.

“I [rapid] tested positive Saturday afternoon,” they said. “I’m not able to get a PCR test confirming that I have COVID until Monday.”

Chuck said they believe that Rice should purchase rapid testing kits and make them available to students.

“I’m sure Rice, the university that it is, can find these tests in bulk and supply them to their students who might think they have been exposed and make them not wait 24 hours for a potentially positive result,” Chuck said.

Kirby said that Rice does not anticipate buying rapid tests.

“We’re very happy with our testing machine that we have now,” Kirby said. “We have no plans to go to rapid testing.”

As Rice reevaluates its COVID-19 policies, including prohibiting indoor consumption of alcohol in a late Monday message, Williams said she believes Rice is doing as well as they can in a difficult situation.

“Overall, in terms of the balance, I think Rice is trying their best with the rules,” Williams said. “I think students will be mad if things get shut down or if there are no further restrictions put in place to stop the spread. It’s kind of like a lose-lose situation.”

However, Williams said she has lost some faith in the university, between what she sees as poor planning for the semester and the disruption following dozens of unnecessary isolations during Orientation Week.

“Everything seemed kind of in disarray during the false positive scare in O-Week,” Williams said. “I wish that Rice had kind of thought through some things before people arrived, because now it just feels like they’re punishing students for the mistakes the administration made in terms of planning.”