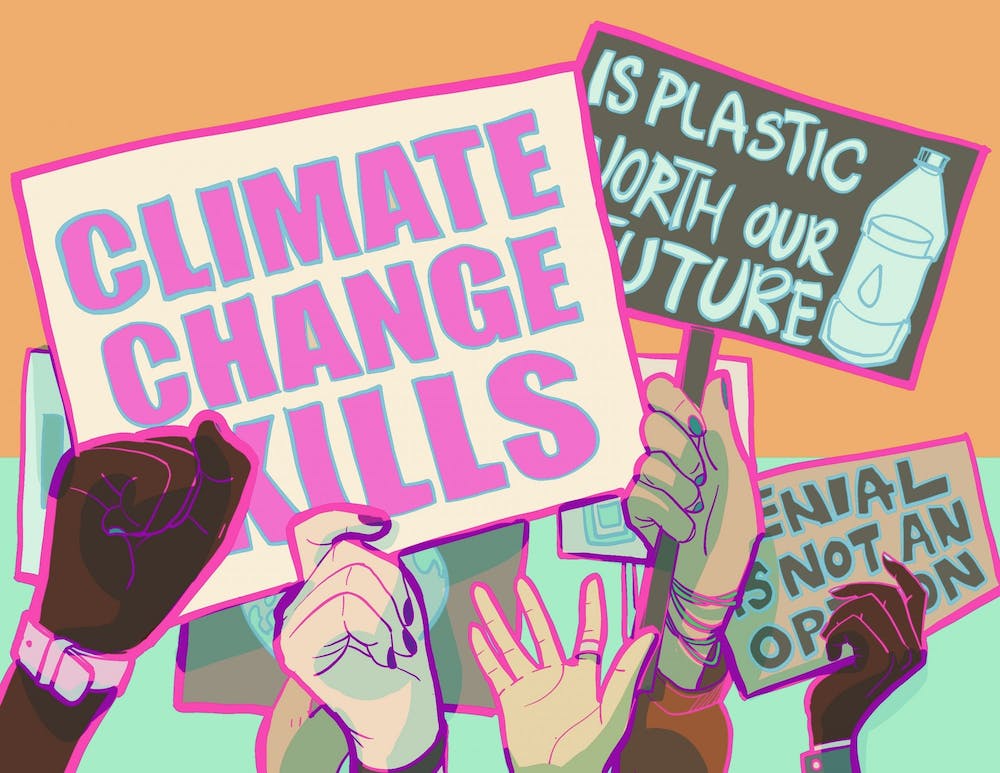 Sept. 24 marked climate marches that occurred across the country, including one scheduled to occur in Houston. Rice Climate Alliance, a club dedicated to advocating for and educating students on the current climate crisis, did not attend due to the Houston march’s poor organization, according to Clara Ursic, the Rice Climate Alliance treasurer.

Rice Climate Alliance planned to attend the climate march in front of Houston’s city hall, but it was eventually cancelled due to low coverage and poor anticipated turnout in the Houston area, according to Ursic. Comparatively, around 2,000 students attended the New York City march on Sept. 24, with thousands of other demonstrations occurring around the globe.

Over 1,300 climate marches were registered to happen on Friday around the world, as part of Fridays for Future, which started during the climate marches in 2019. Ursic said she was disappointed that the Houston march was canceled, especially since Houston is a big city.

According to the National Oceanic and Atmospheric Administration, 2020 was a historic year of weather extremes, with a record of 22 separate billion-dollar weather disasters in the United States alone. with current changing weather patterns attributed to climate change, one being the fact that on average, there are seven natural disasters per year, evidence points to irreversible future consequences.

Richard Johnson, sponsor of the Rice Climate Alliance, wrote in an email to the Thresher that he believes the planet is currently approaching a turning point, climate-wise.

“Experts suggest that once we hit 1.5 degrees Celsius – in other words, when we add just another half degree Celsius of warming on top of the one degree that has already happened – things will truly go from bad to worse,” Johnson, executive director of Rice’s Sustainability Program, said. “And at 2 degrees Celsius – another full degree of warming – we get into potentially dystopian scenarios. In short, we need to be deeply concerned.”

Johnson said that climate change can affect certain communities more than others.

“We need to be mindful that the impacts of climate change fall disproportionately on historically disenfranchised populations, and as temperatures continue to rise, this will only get worse,” Johnson said. “Now more than ever, we need to look out for each other.”

Ursic also said climate change impacts people disproportionately, such as lower-income communities. Ursic said the most glaring issue to her is the fact that future generations will not be able to have the same opportunities as people do now.

“[Combating climate change is] about ensuring that as time goes on the Earth is fit for future generations,” Ursic said.

“I think as a university, we could do a lot,” Ursic said, “For example, one of our main projects is the Divestment Initiative. We’re trying to research a lot about divesting from fossil fuels and then reinvesting in renewables.”

Johnson said that all students are involved in the climate crisis, even if they are not associated with a particular cause.

“You’re already involved, regardless of whether you identify as being part of any particular climate cause or not,” Johnson said. “Be energized by the thought that we collectively have the opportunity to remake the world for the better. It’s not the situation we asked for, but it’s the defining moment that’s upon us.”