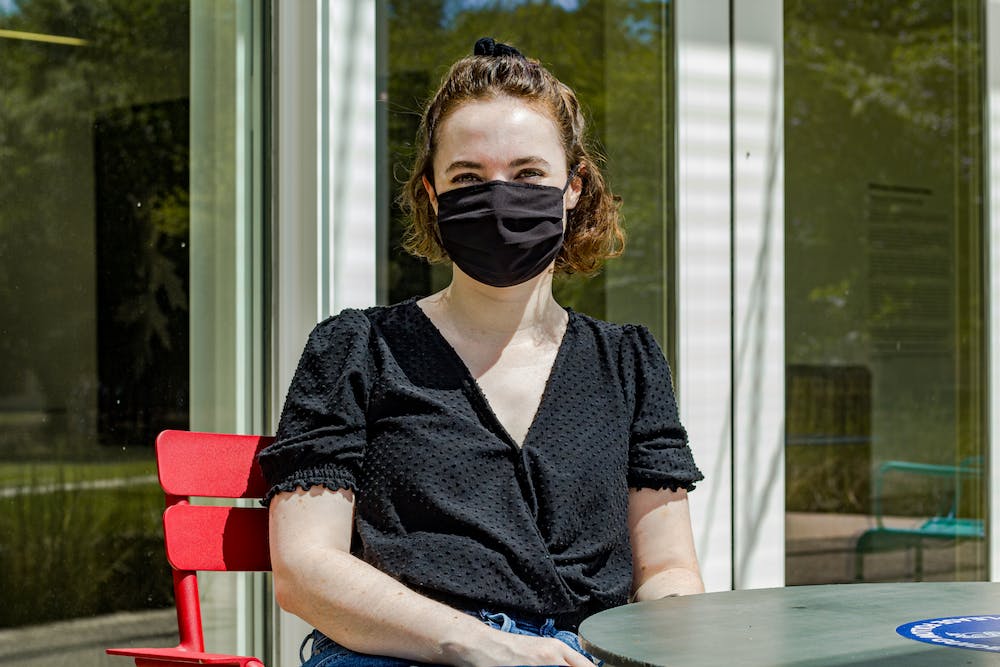 Maddy Scannell, a Martel College senior, was briefly considering medical school when she started at Rice. Now, she’s graduating with a degree in political science, and heading into consulting and Harvard Law School after Rice. Katherine Hui/Thresher

“Preparation was pretty tough because we were right in the middle of midterms, but we set aside time for practice rounds and writing new arguments throughout the previous week,” Scannell said. “My partner, Annie Chen and I, finished the season ranked first nationally, so we were already satisfied with how our season had gone and decided to just read arguments we cared about. It felt really good to not always do the most strategic thing and still contribute to the team’s success.”

Scannell said debating has been a formative part of her time at Rice — and that college debate has differed significantly from the debate in high school.

“In high school, [debating] was very much just about competing and winning,” Scannell said. “But doing it through the Humanities Department at Rice has allowed me to think more critically about policy problems and philosophical problems. It's less about winning and more about the intellectual exercise of reading and debating people and coming to new understandings. So that's been really special and a skill that is hard to get in a classroom setting.”

Scannell says she is really grateful to her debate coaches David Worth and Shannon LaBove for always challenging her.

“Dave and Shannon have devoted so much time to not only coaching the team but also shaping us as individuals to be better people and find what we care about,” Scannell said. “Plus, it’s nice to have people willing to call me out on my BS.”

When Scannell first came to Rice, she planned to be a pre-med student. After her first week of classes, she decided to switch to political science, and hasn’t looked back since. Scannell said this decision gave her time to take the classes she loved.

“[During O-week], I remember there were presentations about, ‘If you want to be a biological sciences major, this is what your four-year plan would look like,’” Scannell said. “And I was seeing that there wasn't a lot of time to take classes I was really interested in, [like] humanities classes and social sciences classes. And that's not what I wanted out of my college experience. And so I was like, ‘Okay, if I'm not passionate about what I'm doing, and I feel like I'm going to be miserable, and have [fear of missing out] about all these incredible classes I know Rice offers, I should just take a path that allows me to do what I want to do.’”

Outside of her classes and debating, Scannell said she enjoys reading postmodern philosophy. In particular, she likes the work of Duncan Kennedy, a legal philosopher at Harvard. Scannell said she learned a lot about law and law school from his work. After Rice, Scannell herself will be attending Harvard Law School.

“[Kennedy]'s written a lot about how law school and laws and institutions are problematic and uphold problematic structures,” Scannell said. “And so thinking about where I fit into that, and how I can help change that or understand it better, is really compelling to me.”

Scannell has also been critical of her role as a student at Rice. She said she was once hyper-involved in many activities in order to be a “successful” student, but she struggled with stress and burnout before she managed to find a balance in life.

“No one really tells you — or at least no one told me —  how much work is normal, how much you should be pushing yourself or how much you should be sacrificing,” Scannell said. “So it ended up being kind of trial and error for me, which was rough and took a toll … So that's been probably the biggest challenge: finding the balance between not feeling left behind and still taking care of yourself.”

After trial and error, Scannell said she has achieved a good balance in the past year and a half. One thing she finds useful, she said, is to spend her time and energy on things that she truly cares about.

“One thing that's been helpful for me is to only do work that I care about, and only work that makes me happy,” Scannell said. “So if that means I'm not going to write papers I think are boring, then I'll write about something that excites me. If it means doing a different extracurricular activity or quitting a job, then I'll do that. Because I think even if you're busy all the time, if you're doing stuff you care about that really helps with the balance.”

Back in August 2020, Scannell was admitted to the Junior Deferral Program at Harvard Law School. That means she could do whatever she wanted for two years before attending Harvard. Initially, Scannell planned to do a fellowship in Ireland organized by Rice’s Jewish Studies Department. However, the program was postponed due to the pandemic, so Scannell chose to work in consulting for two years instead. Scannell said she has chosen to consult because of the earning and networking opportunities.

“I want to save for law school,” Scannell said. “It's so expensive. So I knew I wanted to do something where I could be making money. And then I also think that the exposure to different businesses and people and industries that you can get in consulting will help me be a better lawyer in the future, both through networking and getting a better idea of where my interests lie.”

Overall, Scannell said she has enjoyed the trajectory of her life here and has loved her time at Rice. It makes sense — Scannell fell for Rice as early as her Owl Days visit.

“I came for Owl Days, I loved it,” Scannell said. “And I was like, ‘Alright, sold.’ So it's just kind of [circumstance that led] me here. But I'm so grateful that I chose Rice. It was one of the best decisions I've made.”

Editor’s Note: This is an installment in Senior Spotlight, a series intended to explore the stories of graduating seniors, who are chosen at random to participate.