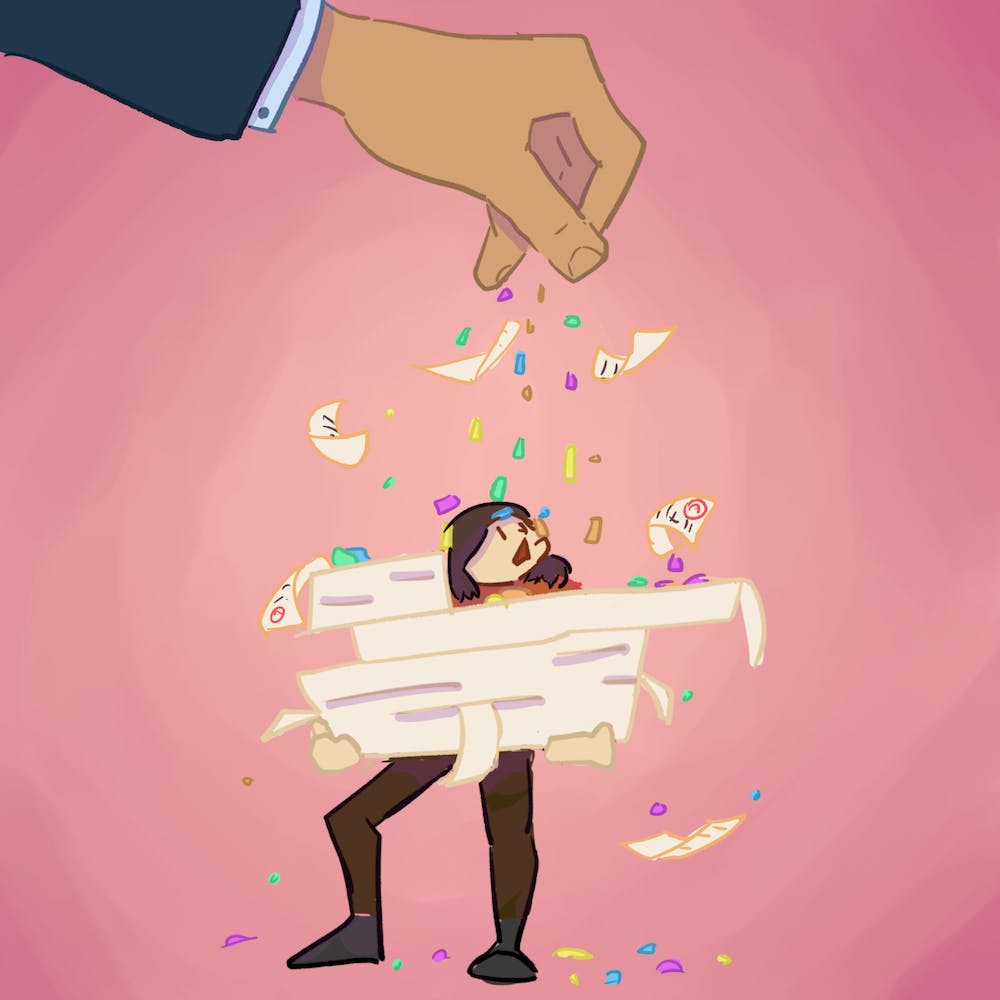 Two sprinkle days have occurred so far, with one occurring during the winter storm, and the final three will occur on March 16, March 26 and April 8. Students have generally responded well to the implementation of sprinkle days, but some say it is hard to take a break as intended with only one day off.

The ARC implemented sprinkle days after receiving input from the administration and Faculty Senate. A survey from the Dean of Undergraduates last semester also gathered student feedback. According to Chris Johns-Krull, the chair of the Academic Restart Committee, the strong overall impression from that survey was that the compressed format of last semester with no breaks was particularly difficult for people mentally.

“In general, there was probably more desire for a full spring break [this semester] but I think a lot of people understood why that probably wouldn’t happen,” Johns-Krull said. “Students did generally voice their desire that Mondays and Fridays be included as sprinkle days, so we did do that.”

The goal of sprinkle days, which are five days off for students spread throughout the semester, was to provide more breaks during a compressed semester without the risk of community travel with an extended break, according to Johns-Krull.

Student Association President Anna Margaret Clyburn said she believes sprinkle days have been relatively well-received by students, but there are student concerns about being able to rest during sprinkle days.

“I’ve heard from students that they haven’t been able to take a break during the past two sprinkle days, both as a result of the winter storm … and the amount of work they have been assigned for the semester,” Clyburn, a Martel College senior, said.

“This would give more freedom for students to relax and unwind over the weekend, instead of solely using a sprinkle day to catch up on homework,” Ni said.

Samantha Cheng, a McMurtry College junior, said that she understands others' frustration at having spring break canceled and that having no spring break makes the semester a little more stressful.

“I can also imagine the alternative where students go home or travel for an entire week, causing COVID cases to spike the following week, and the university might have to shut down again like it did last spring,” Cheng said.

Laura Kabiri, a professor currently teaching three courses in the kinesiology department, said sprinkle days have affected the timing of her course content but not the content itself; she said she has not cut any material.

“The events that caused the current [semester] alterations were unexpected and unavoidable,” Kabiri said. “While sprinkle days are no spring break, it seems a fair, temporary alternative that reduces risk and still breaks up the semester.”

Moushumi Sahu, a Lovett College senior, said she also would have preferred having sprinkle breaks that lasted a few days.

“I think that would have been nice so that we would have had a longer time to recuperate instead of feeling the stress to complete our work for the next day,” Sahu said.

Duncan College sophomore Adnan Lateef said he does not think there would have been more student travel during a mini-break.

“With online learning, students have the opportunity to travel anytime they want, so it's really up to the student at that point, not the university,” Lateef said.

Clyburn said she has heard positive feedback largely through word of mouth regarding Rice not removing sprinkle days after the winter storm.

“That Rice chose to maintain the sprinkle days demonstrates to me that the university’s leadership is committed to maintaining this support for student mental health and wellbeing,” Clyburn said.

According to Clyburn, four students — Adam Cardenas, Gargi Samarth, Lily Sethre-Brink and Trisha Gupta — researched student mental health and motivation and what academic changes would most support students this semester, among other things. They presented their findings at the Feb. 24 ARC meeting. The ARC announced a set of altered policies on Feb. 28, which prevented instructors from posting material on a sprinkle day or having assignments due the calendar day after a sprinkle day.

Sethre-Brink said this research has been a continuous effort since the beginning of the fall semester.

“While the final ARC meeting was the tipping point, this has been a long process that has required continuous advocacy and the pivoting between different tactics,” Sethre-Brink, a Baker College sophomore, said.

Melissa Bailar, who teaches a practicum course in the medical humanities department, said the recent policy on not allowing assignments to be due the day after a sprinkle day seems invaluable for students.

“In the fall semester, so many students I spoke with were burned out, just exhausted and stressed,” Bailar said. “If assignments were due the day after [a sprinkle day], students would be in the same position as last semester.”

However, Bailar said she wished that this policy had been made clear last fall, when faculty were putting together their syllabi and setting expectations for their courses.

Sahu said she would have preferred a longer semester but understands that it was likely not feasible.

“As a second-semester senior, this semester has felt really short with everyone coming back to campus just a few weeks ago,” Sahu said. “I would have really liked having a longer semester to make up for not being on campus when school got shut down last March.”

According to Johns-Krull, the idea of extending the spring semester a few weeks was briefly considered when planning last semester, but ultimately wasn't feasible. Johns-Krull said the semester was originally delayed because of worries regarding a winter surge in COVID-19 cases, which is exactly what occurred.

“All university faculty contracts go through May 15; they’re not paid beyond May 15, so there’s kind of a hard backstop on that side,” Johns-Krull said.

Bailar said many students she talked with said they appreciated the long winter break.

“The semester would certainly be easier on faculty if it were the same length as previous semesters, but I understand the university's reasons for shortening it,” Bailar said.

Several events were hosted on the past sprinkle day, including Tai Chi lessons hosted by the Recreation Center and Office of Multicultural Affairs and a stress management event held on Zoom by the Wellbeing and Counseling Center. Sixteen participants attended the stress management event, according to Kathleen Richardson, associate director of case management at the Counseling Center. Seven students attended the Tai Chi event in the central quad, according to Larry Garvey, office assistant of the OMA.

Ni said he appreciated how Rice handled the sprinkle days, and how faculty was accommodating during the winter storm.

“I think this entire year has been tough and unconventional, but it has ultimately been a blessing to work through the highs and the lows with such an amazing group of students and faculty,” Ni said.