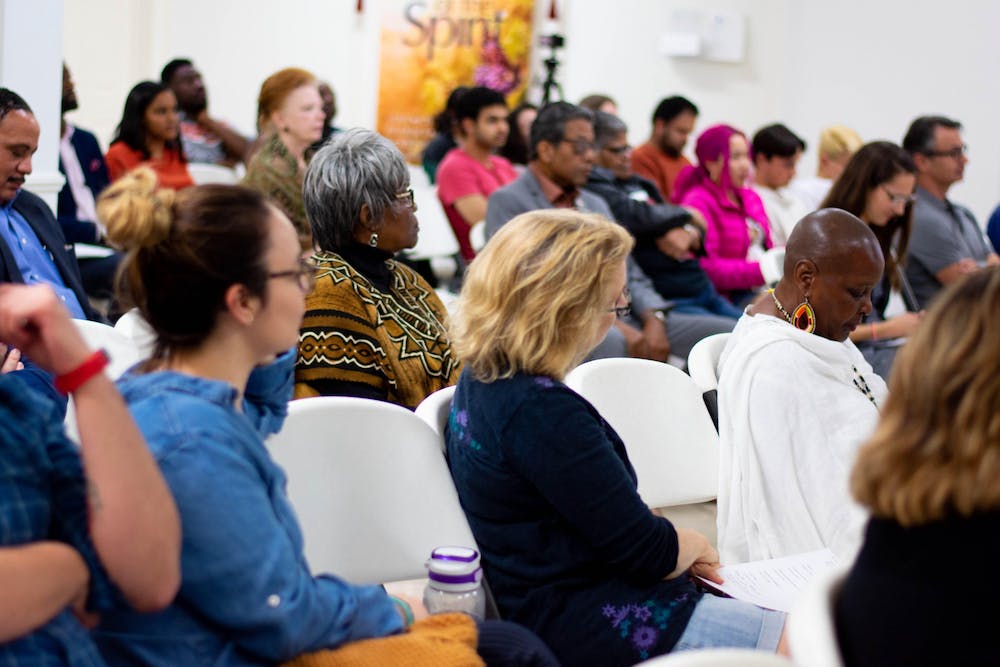 During the meeting, Dike spoke about the drafting of a Community Benefits Agreement, which Rice Management Company plans to sign with the City of Houston. A CBA is a legally binding agreement that calls for specific benefits to be produced by the development project for the community, and serves as a way to enforce developer’s promises.

This CBA has become a point of contention between Rice Management Company and activist coalitions from the historically-Black Third Ward, namely the Houston Coalition for Equitable Development without Displacement. HCEDD’s short-term goal is to address the needs of Third Ward residents who are vulnerable to displacement.

“[Rice Management Company is] going about a process that has no resemblance to a CBA process across the country, but [is] then calling it a CBA,” Neal, a Jones College senior, said.

Malaika Bergner, the chair of the Student Association’s Ion task force, explained that a CBA should directly include the community in question.

“A CBA needs to be agreed upon by the community that is being affected, but Rice Management Company wants to make a ‘CBA’ with the City of Houston — who should not and cannot speak for Third Ward,” Bergner, a Martel College sophomore, said. “This is an insult to the community that will be most impacted by the Ion and an insult to all of the work that HCEDD has done to educate the public on the meaning of a CBA.”

This conflict echoed an SA meeting from January 2020, when two representatives from Rice Management Company argued against a Senate resolution calling for a CBA with HCEDD. The resolution was later amended to state that the SA would support a CBA with the City of Houston if Rice Management Company made HCEDD an equal decision-maker and signatory in the process; it passed the Senate nearly unanimously on Feb. 17, 2020. HCEDD is not currently involved in the CBA process.

In last week’s Senate discussion, Dike explained that Rice Management Company’s CBA working group would serve as a vessel of community engagement for the development. Dike declined to make recordings of working group meetings available to the Thresher, indicating that a report would be available at the conclusion of the working group process.

“We invited a number of stakeholders to participate in [a] working group last November, and we have had several meetings,” Dike said. “We’re looking to identify specific commitments that would fit into the areas of focus that I mentioned earlier around economic opportunities, housing affordability, and inclusive hiring and contracting.”

“It wasn’t until recently, after the working group has been meeting for several months now — almost three months — that [HCEDD] were interested in actually now participating in the working group,” Dike said. “Integrating new representatives into the working group requires some sort of orientation.”

“It seems that Rice Management Company always had an idea of what they thought innovation looks like for community members,” Elegon said. “There are Community Benefits Agreements that have taken years. For them to state that they’re already done with the majority of the process, that they don’t need us, is absolutely horrendous to even hear. Any person, any organization across America that’s gone about community benefits agreements would say this is a sham of a process.”

SA President Anna Margaret Clyburn said she was not originally aware of the recent communications between Rice Management Company and HCEDD when inviting Dike to speak at the SA meeting.

“Our intention for the conversation was to create an accountability check for the Rice Management Company by giving students the opportunity to ask questions about the development and to meet the new person, [Samuel Dike], who would be charged with working with us on this initiative,” Clyburn said. “We later learned that communication had broken down between the Rice Management Company and community advocates over the year; this is information that could have changed the nature of the invitation had we known this sooner.”

Clyburn said that at the next SA meeting, discussion surrounding this topic will focus on ways the SA can empower students who are engaged in Ion-related activities.

Updates on the Ion

Retail establishments have started leasing space in the Ion, according to Dike.

Dike anticipates that the Ion building itself will be completed shortly, at which point tenants will begin constructing their spaces. Soon after, events may start happening at the Ion.

Elegon said that the completion of the Ion will not affect HCEDD’s organizing related to the entire Innovation District.

“The Ion is [one] of many different buildings,” he said. “One building going up does not detract from this mission and making sure that all the buildings are going to be equitably built, done, strategized and designed.”

In a recent email to Rice Left obtained by the Thresher, Neal called for volunteers to join HCEDD in actions intended to “control the narrative around the Innovation District and secure a Community Benefits Agreement for Third Ward.”

A table in the email lists five “strategy teams”: public comment, grassroots, media, direct action and digital. Actions include door knocking, literature drops, posters, op/eds, car rallies, press conferences and social media ads. Elegon declined to provide many details about these actions, calling them “a conversation on the back end.”

HCEDD is planning these actions to further educate the community about the Innovation District development process, according to Elegon.

“All the actions are being done with the goal of making sure that every person affected by this development, whether it be the resident across the street from the Innovation District, the business owner across the street from the Innovation District, any possible tech entrepreneur that’s going to be in the area, any elected official that has to make any decision on this … understands what the actual true narrative events have been,” Elegon said. “It’s really just all actions that are based off of story sharing.”

The SA Ion task force has also been working closely with HCEDD, and has recently begun planning an opportunity for Rice students to work more closely with HCEDD to build a stronger relationship with the coalition, according to Bergner. The task force is also working to get more transparency from Rice Management Company about their recent development plans, according to Bergner.

“I would like to make something clear — Rice students are in this fight. Our students have been a part of HCEDD since its inception and are completely invested in it to this day,” Bergner said. “We can and we must support our neighbors in the Third Ward as they fight for a CBA that benefits their community. Not only is it the right thing to do, but it is a small piece of what our institution owes to the incredibly rich and vibrant community that existed long before Rice University.”