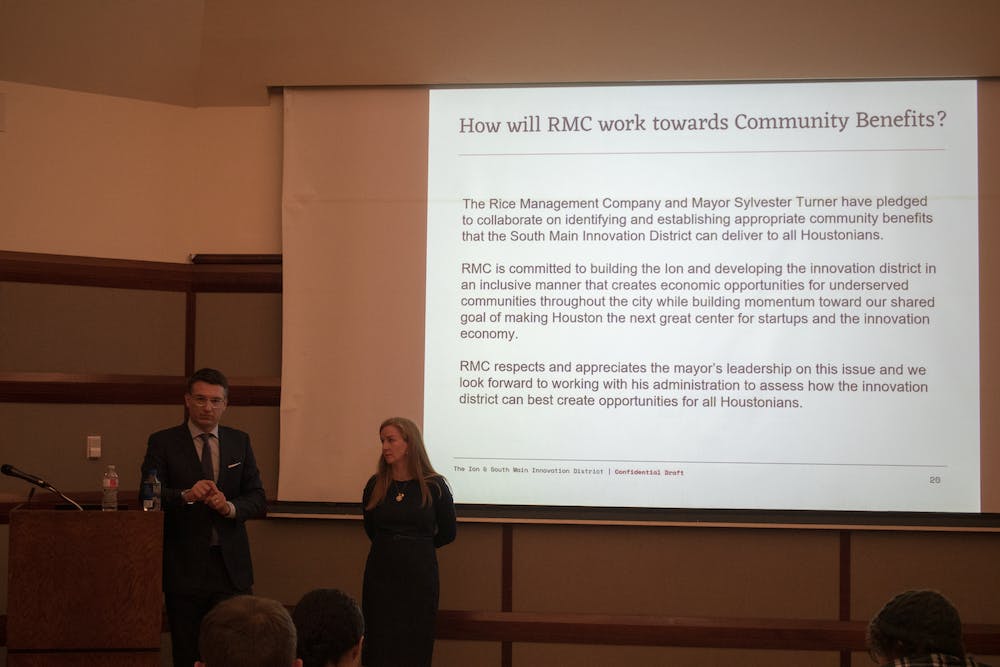 Allison Thacker (Baker ‘96) and Ryan LeVasseur (Wiess ‘01, School of Architecture ‘03) from Rice Management Company gave a presentation to dissuade Student Association members from supporting Senate Resolution #8, a resolution advising that Rice and the Board of Trustees enter into a Community Benefits Agreement with the Houston Coalition for Equitable Development without Displacement at the Student Association Senate Meeting on Jan. 27.

Afterward, the sponsors of Senate Resolution #8 gave a presentation on the resolution. The sponsors decided against passing the resolution until after Feb. 4, which is when the HCEDD, a coalition of community groups in Houston, will meet to officially draft the CBA. A CBA is a legally binding, enforceable agreement that calls for a range of benefits to be produced by the development project.

LeVasseur, Managing Director of Real Estate and director of the Ion project, said that not only did the HCEDD not have the authority to enter into a legally binding contract such as a CBA, but that the group, while representing a legitimate portion of the community, did not represent the entire community.

“The counterparty that is part of the proposal in front of you does not have the authority to be a counter-party in anything that is legally binding. It will be a challenge for us to engage with them,” LeVasseur said. “The group that is part of this proposal before you [...] does not represent the entire community as defined as Houston, and or just the surrounding communities around the project.”

After the presentation, Nia Prince, one of the sponsors of the resolution, said she did not understand why LeVasseur said that the HCEDD did not have the authority to be a counter-party in a legally binding contract.

“Honestly, that really confused me. I did not understand why they said that because we have the research, literally cited right here in our resolution, to show that it’s possible to sign into a CBA with a coalition. It’s a community benefits agreement, not a city benefits agreement. It can be done with coalitions,” Prince, a Sid Richardson College junior, said.

Mary Claire Neal, another sponsor of the resolution, added that the HCEDD has legal representation.

“The coalition currently has a legal team, Texas Appleseed from Austin. So there are lawyers working with us, and I think they know what’s possible in terms of enforceability,” Neal, a Jones College junior, said.

Thacker, the President and Chief Investment Officer of Rice Management Company, said a lack of affordable housing and resulting displacement in the Third Ward is not a direct or immediate consequence of the Ion.

“Displacement is happening right now, before the Ion. And so, this is a major issue that our city needs to grapple with, starting right now, starting ten years ago. The Ion itself is not going to cause specific displacement this year,” Thacker said.

“If our investment does not happen, if for some reason we do not execute on this plan, those tens of millions of dollars in housing in the Third Ward helping to solve displacement will not happen,” LeVasseur said.

According to Thacker, tax dollars have already been generated as a result of construction on the Ion and are already accessible for use to build affordable housing in Third Ward.

“By us being there, we’re actually driving tax increment dollars as our tax bill goes up in that area, and so those dollars actually are available in the current period to start going into that pool. So even last year we would have paid into that pool,” Thacker said.

LeVasseur said that the issues the HCEDD represents do not encompass all of the issues that concern the community.

“In the very simple sense, this could be boiled down to: ‘Hey, did you hear Rice is displacing poor people?’ ‘No, I didn’t hear that.’ ‘Sign this. This will stop it.’ And it’s a broader issue, right? There are multiple issues at play here [and] right now, what is in this specific proposal with this specific language, does not address all of those issues properly,” LeVasseur said.