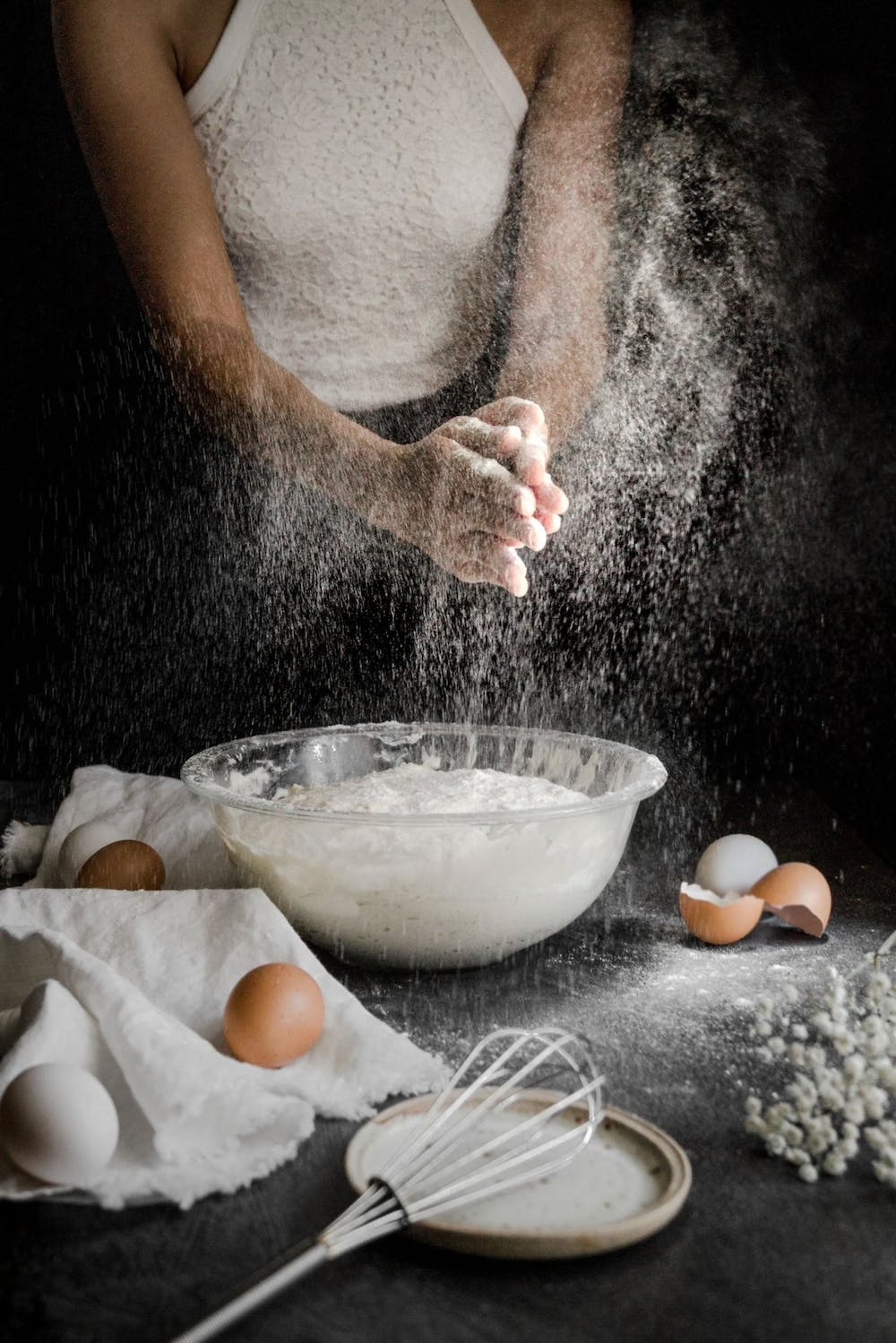 Catherine Li preparing food. The Duncan College sophomore started her food Instagram, @cats_cuisine, as a creative outlet during her senior year of high school, and turned it into a blog during the pandemic.Photo by Catherine Li

Scrolling through Instagram a year ago, I remember feeling like sourdough bread was suddenly everywhere. When COVID-19 lockdowns first went into place, people were spending more time at home than usual. Many took up baking and cooking — then shared their creations online. At the beginning of the pandemic, four Rice students started food-related Instagram accounts showcasing their recipe development, dietary choices, fitness and wellbeing. A year into the pandemic, we talked to them about their passion for food, the challenges they faced and the rewards they’ve gained in the last 12 months.

Anika Jain cooked a lot at the beginning of the quarantine. Initially, Jain attempted to keep records of what she made and share the images with her friends, but later she was inspired by other health bloggers and created her own Instagram account, @nourishedbyneek, which now has almost 1,000 followers.

Jain makes a wide variety of food from big meals to smaller, tasty treats, including scallops, ginger miso dressing and lemon cakes. Jain says she usually just tries to make what she is feeling at the moment.

“I wanted to try scallops last week, so I tried that … but I wouldn't say there's anything that I do regularly,” Jain, a McMurtry College senior, said. “Though I'm not vegetarian, it's really cool to experiment with vegan and vegetarian food. So I have tried a lot more ways of cooking tofu, for example, than I ever did before. I just bought tempeh today, which is another soy-based meal alternative.”

Over the past year, Jain said she has enjoyed learning more about aspects of food blogging, including recipe development and Instagram algorithm. She has also met many like-minded people who have interacted with her account through likes, comments and direct messages on her recipes.

“That's been really cool, to connect with people from all over the country and even the world and see sort of what they're doing,” Jain said. “And then as an extension of that, also seeing their quarantine life — people post about their workouts, which is nice, people post about their thoughts or things they're struggling with. And so I think that's something that I didn't expect, and I've really enjoyed.”

Catherine Li started her food account, @cats_cuisine, which now has more than 1,500 followers, as a creative outlet during her senior year of high school. Initially focusing on her food adventures in Houston, Li later switched to homemade healthy eating after being inspired by other healthy food bloggers.

“Cat’s Cuisine serves as a way for me to document my food journey, but it also covers topics such as [eating disorder] recovery, body positivity, mental health, nutrition, self-care and wellness,” Li, a sophomore from Duncan College, said.

During quarantine, Li decided to make Cat’s Cuisine more of a career and rebrand herself as “a professional food blogger, photographer, and content creator.” Li said that a lot of work goes into each role, from blog writing to food photography to personal brand development, and so it is often difficult to balance the time and energy she spends on her account with other aspects of her life.

“I tend to fall on and off Cat’s Cuisine due to stress from classwork, exams and my part-time job as a barista and coffee student at BlendIn,” said Li. “I put a lot of pressure on myself to produce high-quality work, and my perfectionist attitude often holds me back.”

Despite this, Li still finds her food account to be a meaningful way to serve her friends and families with good food and connect with like-minded health foodies.

“Sometimes I’ll receive [direct messages] from strangers or acquaintances [and] friends saying that my content has helped them significantly in developing a better relationship with food or that they tried one of my recipes and loved it,” Li said. “Likewise, I feel encouraged by fellow health foodies when I see their content.”

Sierra Baker, a junior from Wiess College and a swimmer on Rice’s swim team, started a fitness Instagram, @sieerarae.fitness, about a year ago. Baker’s account teaches people how to do workouts and is a place for her to share images of nutritious meals she’s made. Now her account is getting closer to 200 followers.

Baker started her account during quarantine as a fun hobby, she said, where she could put her home workouts, runs and high-intensity interval training workouts. Baker’s favorite part of running the page, she said, is getting nice feedback from her audience about her workouts.

“I love hearing that feedback,” said Baker. “Because I feel like people are really listening and watching. And it just means a lot to me. I feel like I'm helping people and inspiring people.”

Facing school stress, swim practice and her part-time job at a boxing gym, Baker said she sometimes has a hard time posting consistently, but she is actively trying to share more.

“Being able to post consistently is something that's really hard for me,” Baker said. “But I've been working on that and trying to plan out what I'm going to do and when I'm going to post.”

Baker believes that there is a close link between workout outcomes and nutrition, and to make improvements on overall performances, one needs to focus on both instead of just one or the other. Right now, Baker said she is working on her protein intake by incorporating more eggs and high protein pancakes into her breakfasts.

“One of the hardest things for me is keeping my nutrition balanced,” Baker said. “Carbs aren't really an issue. But making sure I eat enough protein is the thing that I've been working on.”

Baker just started her job at the boxing gym, and she plans to incorporate some boxing videos into her account in the near future. She said she hopes that more people will follow her account and find inspiration.

“It's fun to kind of motivate other people and provide workouts for people who are just starting their fitness journey,” Baker.

Leigh Gabriely, a Hanszen College sophomore, started her food Instagram @leighslemonade_ at the beginning of the pandemic to add some fun to her quarantine life and help her reflect more on the relationship people have with food. Gabriely’s account has now attracted more than 500 followers.

“I'm really interested in how food interacts with your wellbeing holistically,” Gabriely said. “And I definitely believe there's a balance, but also [in] eating food that makes you feel good and finding ways of getting creative while also nourishing your body.”

“When you see everything that's available to you, that's where I think the creative process starts,” Gabriely said. “Because you can see different combinations of things. You can see the prices too. So [it’s important] to create something that's efficient, and realistic, and something that's sustainable.”

Over time, Gabriely said her relationship with follower count has changed. She admitted that imposter syndrome had once pushed her to make her images as “aesthetic” as possible. After letting go of that stress, Gabriely said she has enjoyed her account a lot more by posting more random items in her food journey, like her grocery bag and cups of coffee.

“Sometimes when you compare, it drives you to manipulate your content to fit other people's content more, you see, ‘they're getting followers, maybe I should be doing similar things,’” Gabriely said. “And then that kind of takes away from the authenticity of it. But I think that's something that I've actually overcome, letting go and chilling out … It takes away so much pressure, and it adds so much more fun to it.”

Gabriely plans to work in a food industry-related job after college, such as researching how grocery stores and food producers target their customers. She also wants to learn more about American food culture and address food inequalities to foster better eating habits in people from a young age. It makes sense — Gabriely talks about food with wide eyes.

“If you look at vegetables and fruits, it's kind of crazy that these things just grow from the earth for us to eat,” Gabriely said. “They're so different and so versatile. And I think that a lot of times, people kind of forget [that] food is here to nourish us. Food is here for us.”