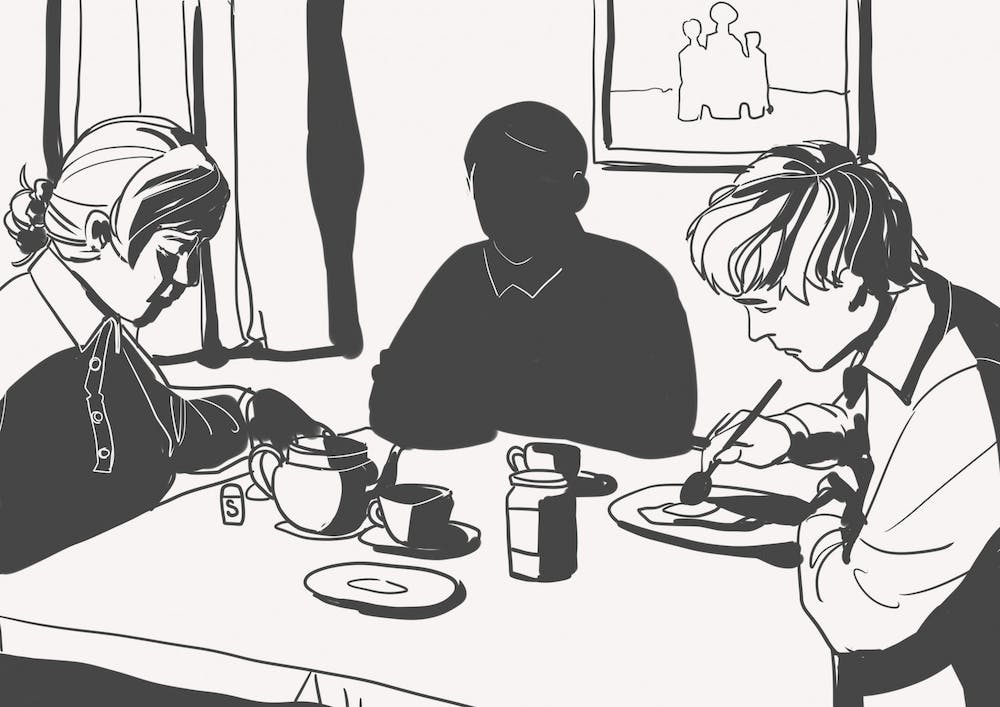 Baker College sophomore Lily Sethre-Brink’s grandfather was named Willis, but she called him Grandpa Will. He was stern but witty, she said, and they would always make blueberry pie together. He did a mean Cookie Monster impression, and when Sethre-Brink was a little kid, she would pretend to fall asleep in his lap so that she could stay in his arms longer. And he always loved to hear her sing.

When Sethre-Brink saw her grandfather for the last time in December, over FaceTime, she sang him one last song. He died at 97 in a nursing home, after breaking his hip, not being fed sufficiently, and contracting COVID-19.

Over the past year, more than 500,000 Americans have died from COVID-19 complications, and the pandemic has taken 2.65 million lives worldwide. As that number continues to grow, people continue to cope with the losses of friends and relatives. The Rice community has felt this grief collectively — mourning the death of staff member Margarita Rodriguez among others — but also on the individual level. The Thresher spoke with two Rice students who have lost loved ones to COVID-19 complications.

“It’s hard not to feel numb”

On New Year’s Eve, just a few weeks after losing her maternal grandfather, Sethre-Brink got news that her uncle Jerry, who had been battling COVID-19 in the hospital, had passed away. He was her father’s older brother, and had essentially raised Sethre-Brink’s father after they lost their own dad.

“My dad’s dad died in front of him when he was 16; he had a heart attack. And I mean, after that, it was my Uncle Jer who really stepped in and was my dad’s person to go to after that,” Sethre-Brink said. “It’s really hard, really hard watching my dad grieve. Cause I mean, it was painful for me, but for him it was just different. I mean, it was devastating.”

Then, on Feb. 1, 2021, Sethre-Brink lost her grandmother to COVID-19 complications. Of the three family members Sethre-Brink has lost during the pandemic, she was closest to her grandma, who was named Mary. They liked to bake sugar cookies together, and Sethre-Brink said that Mary gave the best gifts and always beat the whole family in the humorous party game What Do You Meme? For Christmas, Sethre-Brink got her grandmother sparkly hair clips, which she donned during her last days in the hospital.

Sethre-Brink Zoomed into our interview from the house where her grandparents used to live, and she said it hadn’t quite sunk in that her grandmother was permanently gone.

“I keep expecting when I’m out on the porch, that she’s going to come join me in her zipper-down robe and her slippers. It’s just really hard knowing that she won’t,” Sethre-Brink said. “Sometimes I feel fine and, you know, I’m sad and depressed, but I’m functioning. And then other times it’s like I can’t breathe, and I just want to scream.”

Losing three relatives back to back has been incredibly taxing, Sethre-Brink said.

“It’s been so much so quickly,” she said. “It’s just brutal. There’s no other way to put it. It’s brutal and it’s constant and it’s just really hard.”

It’s a feeling that McMurtry College senior Alicia Selvera shares. In January, Selvera’s aunt and uncle died in the ICU about a week apart from each other after contracting COVID-19. Their names were Rita and Joe, and they were caring people who valued family and food, Selvera said, and opened their home to her sister when she needed a place to go.

Selvera has also lost a number of family members this year to causes other than COVID-19, including her father, who passed away last October after battling colon cancer for a few years.

“When you have these deaths happen one on top of the other, it’s hard to stay optimistic,”  Selvera said. “I tend to be a very bubbly and happy person. It’s just my personality. And sometimes it’s hard to maintain this way, and it’s hard not to feel numb.”

“The world doesn’t stop moving for you”

Selvera is graduating in May, and she’ll be starting medical school in the fall. Although her spring semester is less stressful than previous ones, Selvera said that every day has been demanding.

Last month, Lily Sethre-Brink successfully ran for the Student Association’s External Vice President. Before she announced her campaign, a few weeks after her grandmother had passed, she sat her family down for a talk.

“I was like, ‘Look, I was planning to run for this thing, but one, I don’t know if I’ll be in a place to do it. And two, it will take a lot of my time.’ I was like, ‘Should I do it? Is it okay if I do it? What do you want me to do?’” Sethre-Brink said. “And they said I should run because my grandma wouldn’t want me to put my life on hold, which is probably right.”

Sometimes, though, Sethre-Brink wishes that life could slow down so she could catch her breath, she said.

“It’s really hard to navigate when all you want to do is sit there and cry, but can’t,” Sethre-Brink said. “The world doesn’t stop moving for you.”

Sethre-Brink said that ever since she first lost her grandfather, it has been tough to make decisions about when and how to engage with her responsibilities at Rice.

Selvera has also struggled with being a Rice student while mourning, she said, especially because she doesn’t always want to talk about what she’s experienced.

“I hate to be pitied, and I feel like that’s a lot of the reason why I haven’t wanted to talk about it,” she said. “If people find out, ‘Oh, you’ve had all these traumatic losses in the last few months,’ then they will expect less of me. They will expect me to be in a worse shape than I am, or expect me to be behaving in a certain way. And I think that’s a lot of pressure to put on somebody.”

“Take it seriously until it’s over”

Due to ongoing health risks and social distancing guidelines, people who have lost loved ones to COVID-19 haven’t always been able to mourn in traditional ways. When Selvera’s father passed away last October, she decided to attend his funeral virtually because she felt that going in person would be unsafe.

Although mourning at a distance has been tough, Selvera said that losing so many relatives this past year has only underscored the importance of heeding pandemic-era safety precautions.

“It is frustrating when people just don’t care because they have no reason to care,” Selvera said. “It’s always something you think about, and it’s always like, God, I don’t want to lose any more family members … we don’t want our family to be any smaller.”

That fear plagues Sethre-Brink, too. She said she is constantly scared of getting another phone call with news of a family death, and angry that people treat the pandemic so nonchalantly.

“It just makes me really toxically angry, that people are so entitled they think they can just walk around without a mask, do whatever they want, and there’s no consequences, and they cause other people to lose their lives,” Sethre-Brink said. “I don’t understand how they lack such humanity.”

Ongoing vaccine distribution, warming weather and promising predictions from the Biden administration may have made the light at the end of this long tunnel shine a bit brighter, but Selvera said people must keep in mind that we’re not out of the woods yet.

“I’m glad that it feels like the pandemic is on the decline … but people are still dying,” Selvera said. “You’ve got to take it seriously until it’s over.”

The numbers 500,000 and 2.65 million can feel incomprehensible — especially for those who haven’t lost somebody close to them to the virus. But Sethre-Brink hopes that people will keep in mind that those aren’t just numbers.