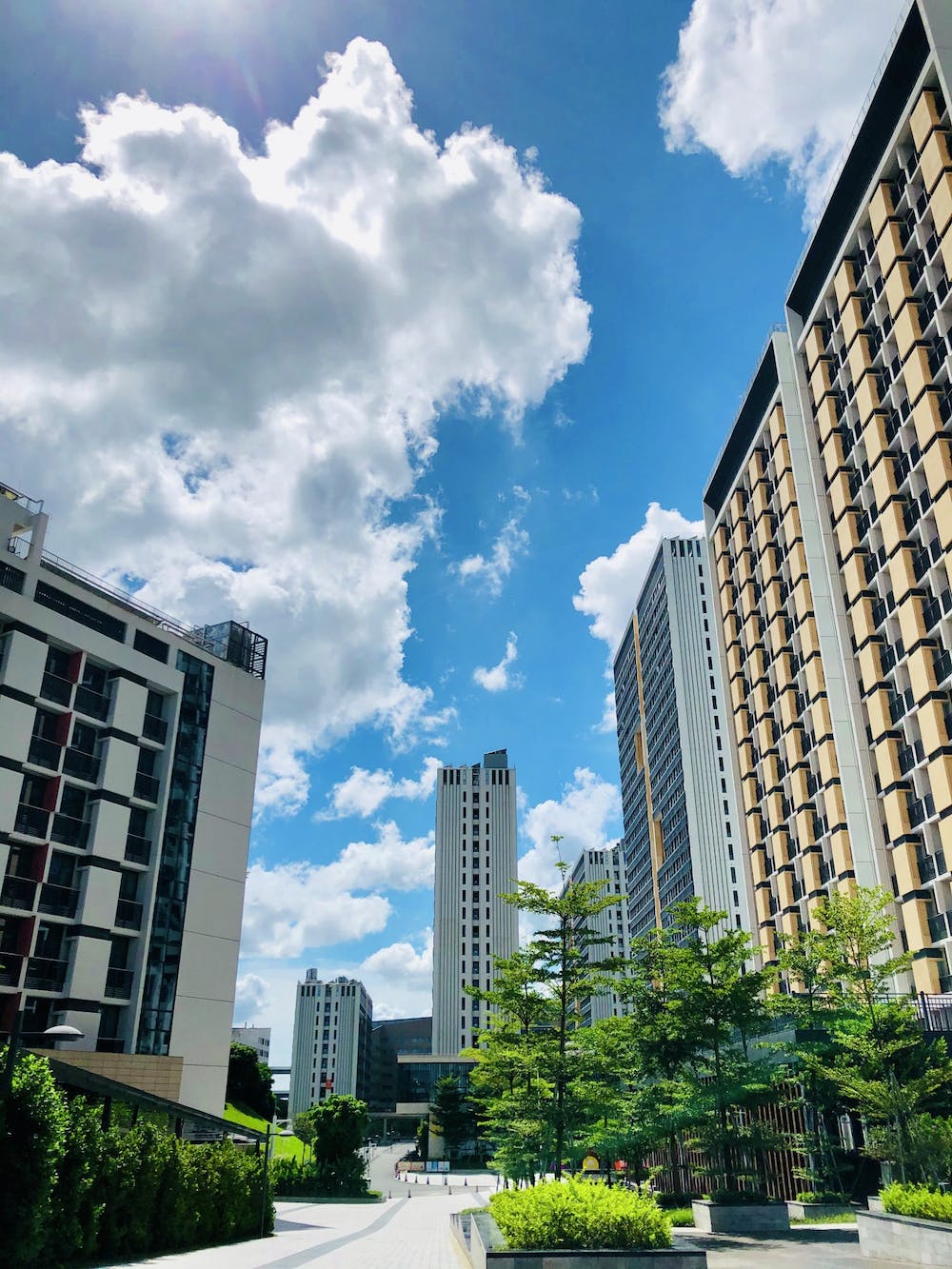 Buildings on the Southern University of Science and Technology’s campus in Shenzhen, China. This semester, Chinese international students had the option to take virtual Rice classes while living at SUSTech. Photo by Sherry Wang.

As life in China has started to look like it did before the pandemic and Chinese cities have relaxed social distancing rules and mask mandates, the Thresher caught up with a group of Rice’s Chinese international students who are taking online classes at Southern University of Science and Technology in Shenzhen, China. From navigating time differences to making new friends, students shared what it is like to study and live on a campus other than Rice.

Most students who spoke to the Thresher for this story said the time difference between Shenzhen and Houston has been the biggest challenge to their learning experience at SUSTech. Although some Rice courses can be taken asynchronously, students have had to adapt their schedules in order to attend the courses that require interaction with peers and professors.

Yumin Su, an electrical engineering student, said that in order to achieve the best learning outcomes, he takes his ELEC 326 course synchronously at midnight from 12 a.m. to 2 a.m. every Tuesday and Thursday.

“Because of the time difference, I often get exhausted and easily distracted in the middle of the class,” Su, a Lovett College sophomore, said. “I have to change my sleeping schedule because of that. So I don’t get up as early as I used to, but sleep till almost noon.”

Su said that eight weeks into the semester, he is still struggling with his new schedule because it creates a greater sense of uneasiness.

“Before the pandemic, my daily routine was taking classes and then doing my homework. But now I would wake up and do my homework first and then take classes,” Su said. “So I often go to sleep still thinking that I have so much work unfinished, which is quite disturbing sometimes.”

Some Rice professors have made accommodations for students who are living in different time zones. According to Su, his Japanese professor has opened more time slots for language practice sessions so that students like him can attend.

“I sent an email to my FWIS professor about the 13-hour time difference and she was really considerate,” Cao said. “She said she would grade my participation through the five- to six-minute reaction videos about what’s discussed in class that I sent after each class.”

“For classes that require lots of speaking, like my Spanish class, if the internet connection becomes spotty, which happens quite often, I can’t learn anything from the class,” Hu said.

While some students only take remote Rice classes at SUSTech, others have opted to take in-person classes at SUSTech as well. Students can take numerous courses at SUSTech, but only one can count towards transfer credit, according to Caroline Levander, vice president for Global and Digital Strategy at Rice.

Jennifer Liu, a Baker College freshman, said that besides the five courses she is taking from Rice, she also takes three in-person courses at SUSTech. Her favorite SUSTech course, she said, is basic biomedical laboratory.

Liu said she hadn’t expected to be able to take an in-person lab in her first semester of college. The lab she is currently in covers most of the materials she learns from her Rice biology class and offers her an opportunity to meet people who share similar interests.

“Though the course may not count toward my Rice credits, I enjoy it so much,” Liu said. “I guess this is a benefit of going local, as opposed to staying at home. I get to meet people with the same passion as [me]. They are so motivated in a way that you could feel connected to them. I think that aspect of human interaction is essential to my study life at SUSTech.”

For Liu, sometimes it’s difficult to balance the schedule of Rice and SUSTech classes, especially when she tries to take all her classes synchronously.

“I’m taking classes synchronously because I really love that real-time interaction with my professors and classmates,” Liu said. “For some days and nights of the week, I’m moving between Rice classes and SUSTech classes, and the schedule can get quite packed up, but that’s also part of the experience.”

According to Su, since everyone has their own schedule, he and his roommates –– who are also Rice students –– have tried their best to make accommodations for each other. If someone has late night or early morning classes, he would take the course at the study lounge located next to their room instead of in the room.

However, the accommodations for different schedules among roommates has not worked for everyone, students said. Some students who suffer from poor sleeping quality had a difficult time falling asleep when there are noises and light.

Yiling Chen, a Lovett College junior, said she decided to leave the SUSTech because of her poor sleeping quality.

“I was maintaining an abnormal sleeping schedule and even though all my roommates were, our schedule was quite different,” Chen said. “Inevitably there was noise and lights –– my bed was close by the window –– when I slept. I had a hard time falling asleep and even when I could sleep, I didn’t wake up feeling rested.”

Due to the time difference, some students also said that they often miss meal times at dining halls. According to Wang, she seldom eats at the dining hall, so she goes to the campus store whenever she feels hungry. Cao said he orders takeout sometimes if he misses lunch or dinner. Liu said since there are two malls that provide a variety of food options in front of SUSTech, she has lunch there as well.

Although they are studying on the other side of the Pacific, the distance to Rice does not keep the students at SUSTech apart from people on campus in Houston. Su said that Rice has tried its best to improve the students at SUSTech’s remote learning experience by purchasing Tencent’s virtual private network service for them so that they can have access to foreign websites such as Google and YouTube that have been banned by China’s censorship firewalls.

Su said Rice has also been very responsive to students’ feedback on SUSTech’s poor internet connection. In a virtual meeting with President David Leebron, he said, some students talked about their concern regarding the internet service at SUSTech. A few days after the meeting, students received a notice from SUSTech, explaining the potential factors that caused the poor internet connection. Su said SUSTech soon sent a few technicians to examine the internet devices and enhanced the stability and speed of the network.

Despite these efforts, Hu said that because of the time difference, he doesn’t find many opportunities to connect with students on campus.

“I expected that this semester would be very different in terms of study and social experience, but I still wish that Rice could offer more chances for international students to interact with those on campus,” Hu said.

Cao said he was disappointed that he could not attend Orientation Week in person this year.

“Residential life defines what university is to a large extent and O-Week is one important way of how college traditions are passed on to new-coming students,” Cao said. “I feel very regretful for not being able to attend O-Week in person. For me, it’s like my college life is no longer complete without O-Week and the matriculation ceremony.”

Wang said she misses her roommates, friends, O-Week family and the professors at Rice whom she didn’t have a chance to say goodbye to last semester. Even though there’s a variety of food options at SUSTech, Wang said she misses the brunch at Seibel Servery the most, especially its omelets.

SUSTech is more than a place to study, sleep and eat for many Rice students, as many have found their niche community at SUSTech and established new friendships with either fellow Rice students or local students.

Liu, who likes singing, formed an a cappella group with five other Rice students and performed at the welcome party for freshmen last month.

“We practiced for the whole two weeks to make it to the welcome party,” Liu said. “Performing the song with my new friends on the stage is such a memorable experience. Because it’s acapella, it adds another layer of meaning that everyone is contributing their part to the entire harmony of the song. That makes me feel so good.”

“My favorite experience at SUSTech is getting to know so many great people through rock climbing,” Wang said. “Rock climbing is such a good opportunity to socialize with local students while exercising.”

Living in SUSTech also comes with the experience of living in Shenzhen, a modern, international metropolis located on the southern coast of China.

“Shenzhen is a city that has so many exciting things to explore, like all the exhibitions, museums, concerts, and so on,” Liu said. “Being able to live in a totally different city is a great experience. I guess that’s the compensation for not being able to go to Houston during this pandemic, at least I’m living in a different city and explore things with my newly met friends.”

According to Su, it’s very convenient to roam around the city thanks to its extensive transport network.

“Since I don’t have a car in Houston, I couldn’t travel to many faraway places beyond Rice,” Su said. “But in Shenzhen, it doesn’t matter whether you have a car or not. Its subway can reach almost anywhere in and beyond the city, which enables me to explore.”

To stay or to go

Due to the comfort she has found in Shenzhen, Wang said she is likely to remain at SUSTech for the spring semester.

“The current life in China is much more convenient than that in the U.S. since most of the regulations have been relaxed and we can just travel anywhere we want,” Wang said. “Moreover, the annoying quarantine policy requires me to quarantine in a third country before arriving in the U.S. I don’t think I would return to the U.S. unless that policy is canceled.”

However, that is not the case for everyone at SUSTech. Cao said he wants to come to campus as soon as possible, once his visa is granted.

“I’m not that worried about the pandemic in the U.S.,” Cao said. “I’ve looked at Rice’s COVID data and read all the COVID-19 regulations it imposed; I have much confidence in Rice. It seems the situation has been taken good care of. I can’t wait to come to campus.”

Liu said she is enjoying her time at SUSTech but still hopes she can come to Houston next semester.

“I feel like this semester is going to be the most unusual and incredible first semester I’m ever gonna experience,” Liu said. “As much as the initial excitement about college life has been slowly worn out by the stress that comes with midterms and essays, life at SUSTech and remotely at Rice has been something to look forward to. Hopefully, I [can go] to Houston next semester, though.” 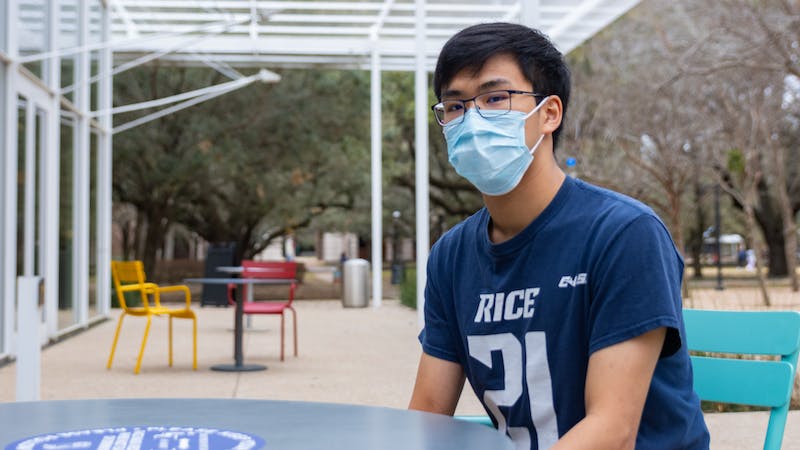 Though his journey as a bioengineering major has since become central to his experience at Rice, Cory Pan’s first experience in bioengineering almost pushed him out of the major. While working on a problem-based learning project, Pan was part of a team that was charged with coming up with a design concept for a device that would measure renal function and notify a patient if they needed emergency dialysis.