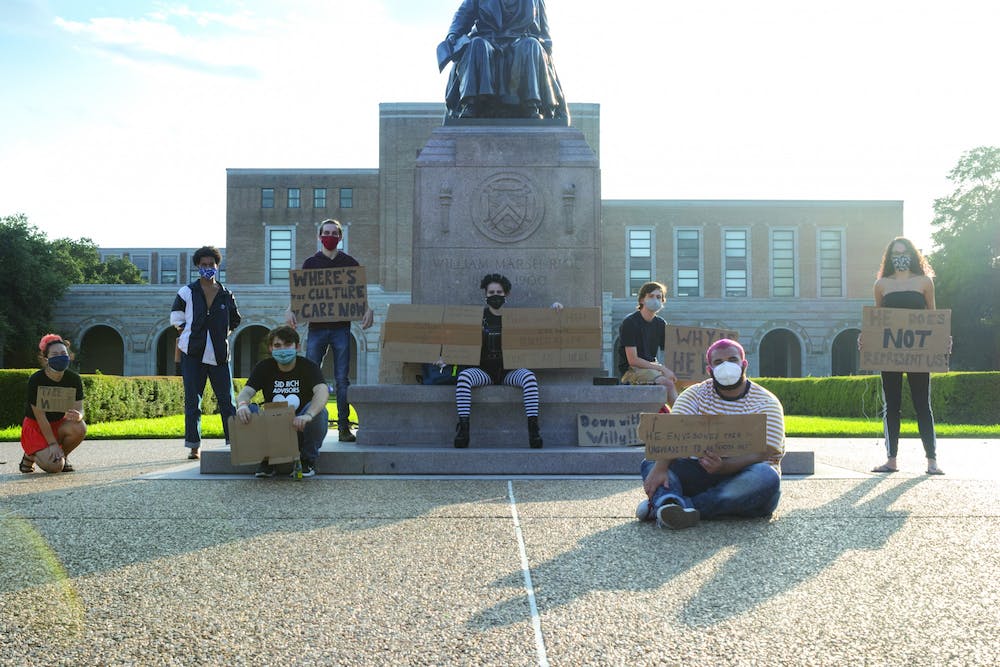 Rahman announced his decision to sit in Founder’s Memorial every day until the administration removes the statue in a Twitter post. Since the first day of the sit-ins, which occur from 6 p.m. to 7 p.m. every day, several students have joined Rahman.

“I simply want the statue to come down from its pedestal and never be in its glorified position anymore,” Rahman said. “If the multitudes of statues coming down over this summer was possible, if [2,759] people equally expressed agreement about tearing down this statue, then this statue can come down as well.”

The petition organized over the summer to remove the statue has received 2,759 signatures at the time of publication. The petition, created by Gabrielle Falcon (Martel College ‘20), referenced the fact that several statues were being taken down at the time across the United States, including the Dick Dowling statue that previously existed in Hermann Park.

Rahman said he believes the statue should be taken down because the effects of the statue’s existence are immediate for Black and Indigenous people and other people of color.

“[One of my friends] said that them walking by the statue is continuing to perpetuate imposter syndrome and honestly looking back at my time at Rice, I agree,” Rahman said. “The statue is more than just symbolic, it’s causing detrimental effects to Black students at Rice right now. An anti-racist step that Rice has to commit itself to is taking down the statue of its founder as it took down the racist mandate of its founding.”

President David Leebron responded to the student-led movement in a campuswide email on June 23.

“Many of those writing to us have supported the removal of the statue, but a diverse group of other students and alumni have written against the removal, while also speaking out in favor of measures to achieve greater equity and inclusion, or have suggested alternative approaches to addressing the issues raised by the statue,” Leebron wrote.  “Most of these communications have been thoughtful and strongly felt.”

A full version of this story will be posted later this week.