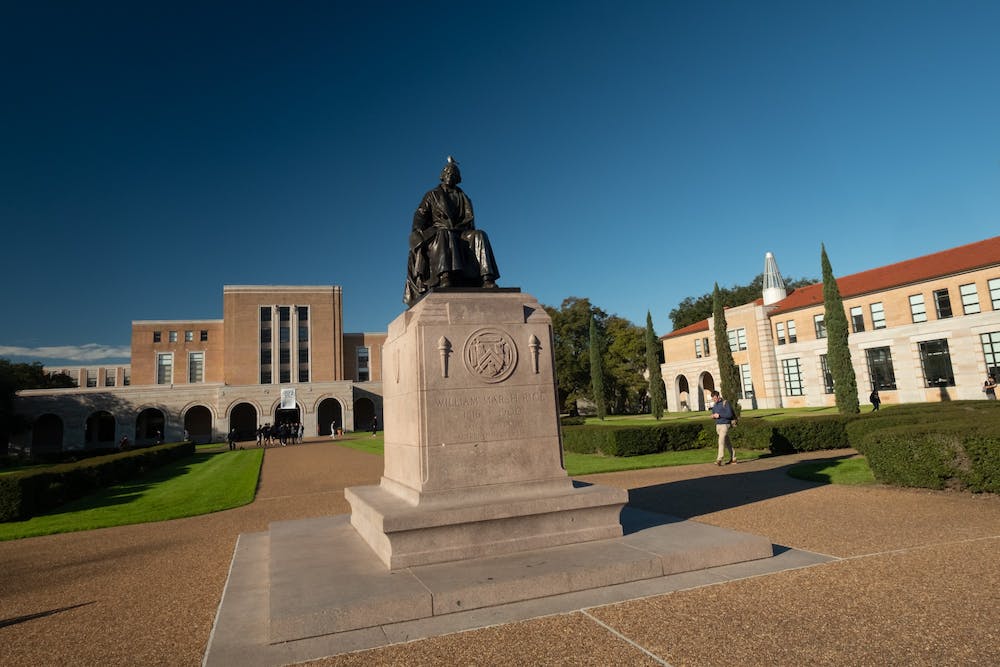 Many Rice students, alumni and community members participated in a social media campaign called “Down With Willy,” demanding that the Founder’s Memorial, the statue of William Marsh Rice, be removed from the Academic Quad and that Rice University end all use of his image in marketing and public relations materials on Monday.

Leebron and university Provost Reginald DesRoches released a statement Tuesday night. In the statement, they acknowledged that they were aware of demands to remove the statue, as well as other items on a circulating list of demands of Black students, but did not say whether or not they would remove the statue from the Academic Quad or marketing materials.

In a statement made directly to the Thresher, Leebron said that administration will consider all the ideas put forward by the group of students sympathetically and seriously, and listen carefully to the lived experiences of our Black students.

“The questions raised about the effect of the statue on students on our campus are very serious, and deserve our attention,” Leebron said.

In the petition to remove the statue, which has received 2,296 signatures at the time of publication, Gabrielle Falcon (Martel College ’20) cited the fact that Rice enslaved 15 people, that most of his wealth came from pre-abolition cotton trading, that he served on a slave patrol and that the original charter that Rice University, drawn from an indenture written by Rice in 1891, stated that the institute would be open to only the “white inhabitants of Houston and Texas” as reasons why the statue should be removed and Rice’s image should be removed from marketing and public relations materials.

“We cannot ignore the very real and very problematic history of the man who founded this institution,” Falcon said. “Progress is inevitable and I would hope that Rice would do its best to join the wave of progress we have been seeing this summer, instead of making pointed decisions to prevent it from flourishing.”

Falcon said that the purpose of the petition is not to reach a compromise with administration, but to have the statue removed from the academic quad and to have Rice’s likeness removed from all public relations and marketing materials.

“I am not even sure what negotiations would be had on this topic since it is pretty binary –– either the statue stays or it goes. There are no other alternatives to that request,” Falcon said. “I think negotiations can be had on where to move the statue or what to replace the statue with. I would hope current students could have a seat at the table and help make some of those decisions.”

Removing the Founder’s Memorial from campus presents a different case from other recent removals of Confederate monuments and statues of slave traders because the granite base that the statue sits on contains Rice’s ashes, which may present legal issues. The Rice Board of Trustees has the power to petition the court on legal issues, as they did in 1963 to change the original charter to enable them to admit students of color and to charge tuition.

Falcon noted that removing the statue would not disturb Rice’s ashes, since they are stored within the base and not within the statue.

“The legality of this should be asked of administration, so we are taking this request to them because they are ones familiar with the charter and the law,” Falcon said.

On Tuesday, Fox News incorrectly reported that students Milkessa Gaga and Kendall Vining, who were involved in compiling the “Tangible Ways to Improve the Black Experience, as Demanded by Black Students: Inaction is Not an Option” list, were representatives for the Rice Black Student Association. Later that afternoon, people from outside of the Rice community targeted the Black Student Association’s Instagram page and started using hate speech and anti-Black slurs in the comment section of posts.

Leebron and DesRoches acknowledged the situation in the statement released Tuesday night.

“We condemn in unequivocal terms those who respond to the expression of proposals and ideas with hate and intolerance,” the statement said.

Gaga and Vining said that the list is not affiliated with the Black Student Association or any other organization on campus. Although Gaga and Vining were not the organizers of the “Down With Willy” social media campaign, which was also mentioned in the Fox News article, the list of demands does include removing the statue.

“The purpose of the list [...] it’s a social statement. And it’s to show people that, look, you can no longer claim that you don’t know what we want, that you have no idea what Black people want, that you have no idea where to start,” Vining, a Martel College junior, said. “Too many times Black people have wanted things to happen on campus, that have been just brushed to the side, and we wanted to just uplift those voices and ideas, and we wanted to do it in the most demonstrative way possible.”

In an email to the Thresher, the Black Student Association said that they also did not organize the “Down With Willy” campaign, nor did the organization have a role in compiling the finalized list of demands of Black students.

Falcon said that she, and likely the people who signed the petition, would be beyond disappointed if Rice decided not to follow the global trends revolving around statues that represent racists’ pasts.

“History has decided to tell one narrative for all of these men, instead of the narrative of the human freedoms and livelihoods they stole,” Falcon said. “So when people say they want to preserve history, I have to ask, whose history are you referring to?”