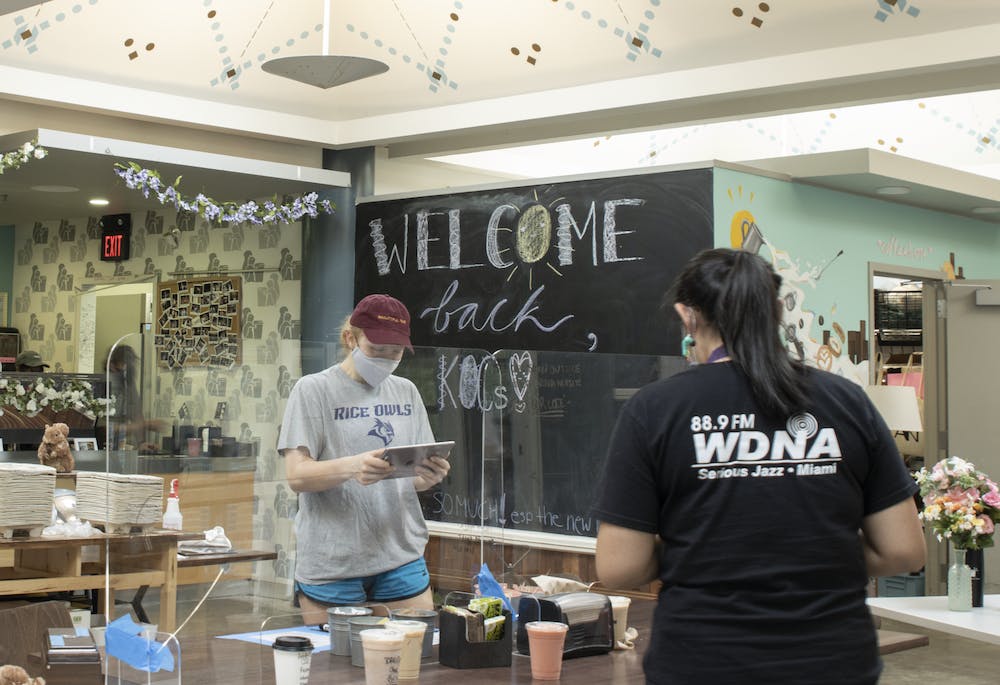 According to Wong, Coffeehouse began preparing for a reopening ever since it was temporarily closed due to the pandemic. Although a summer reopening was considered, the opening date for the shop was revised as the pandemic unfolded.

“We actually had multiple plans to try and open during the summer as well, but it wasn’t so much about reopening right away,” Wong, a senior at Jones College, said. “We wanted to reopen it in the most optimal condition possible.”

In the first weeks of its reopening, Coffeehouse has been serving customers by having them order online and visiting a pick-up station within the store, according to Sophie Clayton, the training manager of Coffeehouse. Clayton said that the store has received a high volume of orders during its first days open, with 433 customers ordering its most popular drink, the Nutty Bee.

“On our first day, I was a little bit overwhelmed by how many people were coming in to buy Coffeehouse drinks because they had missed it for so long,” Clayton, a senior at Martel College, said.

Lidia Ochoa, a senior at Duncan College, said she felt that the website was easy to navigate and she was able to pick up her drink quickly.

“I never once had to dodge crowds or people waiting for their drink, so it felt very safe,” Ochoa said. “I do miss the music and general vibe of Chaüs, but I am very grateful that I can go back to spending all my Tetra on caffeine.”

Although customers are visiting Coffeehouse to pick up their drinks, there are minimal interactions between the Keepers of Coffee, the employees of Coffeehouse and customers under this new system, according to Clayton. Clayton said that only two KOCs work behind the bar and that a wall of plexiglass divides the pick-up station from the rest of the store.

“We’re trying to keep all of that interaction to a complete minimum, so we have plexiglass on the other side of the pickup table,” Clayton said. “There’s zero kind of actual face to face interactions between KOCs and customers.”

“Now everything is shifted online, we definitely see a lot of customers tweeting about the Coffeehouse. Especially when we first opened,” Wong said. “And definitely it makes us feel like we’re some little celebrity, like some B-list or C-list celebrity.”

Wong said that one of the biggest challenges of managing Coffeehouse this semester is being unable to have spontaneous conversations with his staff. According to Wong, who is currently living in Taiwan, communicating with his staff involves a slew of Zoom meetings.

“A big part of our functioning is that we usually bump into people in real life before the pandemic,” Wong said. “It’s just generally hard to make sure that a big team is working well together and also that we are communicating well.”

Korista Lewis, associate director of student-run businesses for the Rice Student Center, said that Coffeehouse had to submit a reopening plan to the Crisis Management Team for approval before they were allowed to reopen.

“They closed down last March thinking, as most of us did, that they would be back in a few weeks once we had a better understanding of COVID-19,” Lewis said. “Now here we are almost seven months later and they have worked hard to create plans.”

According to Clayton, Coffeehouse has also recently begun offering food and catering items to its online menu.

“We did as much planning as we could and we tried to give ourselves and the whole system flexibility in terms of starting with a soft opening, slowly adding parts of our usual Coffeehouse system,” Clayton said.