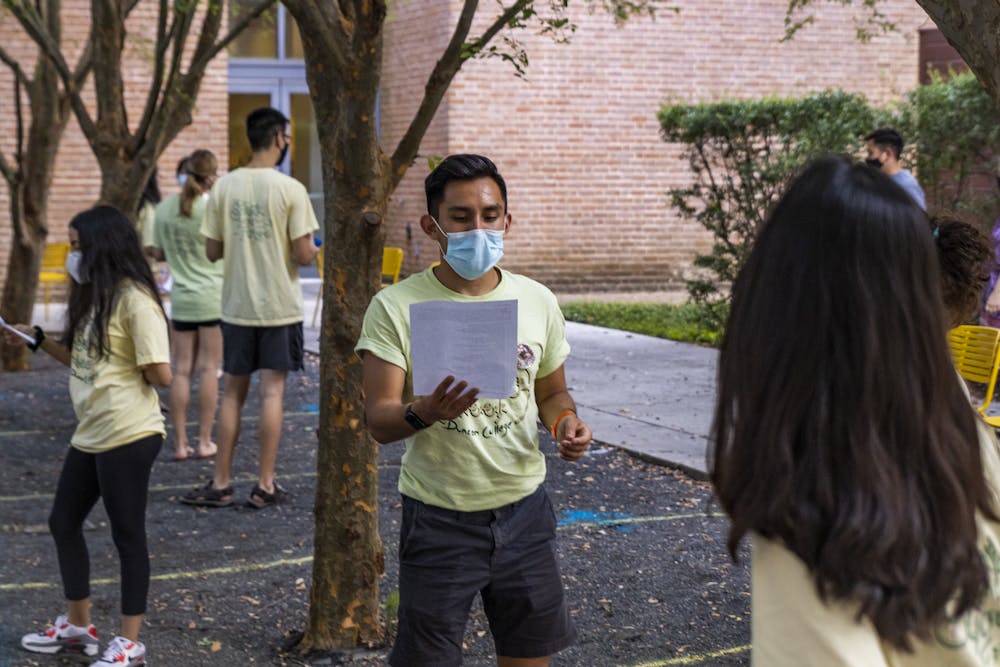 Orientation Week is a decades-old event at Rice, with traditions that have largely remained untouched. This year, coordinators have had to modify or cut out many traditional O-Week events to comply with Centers for Disease Control and Prevention and university guidelines in light of the pandemic, resulting in a unique experience for the incoming class of new students.

Events for all new students were modified to accommodate social distancing; large panels, for instance, were all held remotely. After Tuesday, when Will Rice College’s O-Week went remote, cross-college events and meals in indoor commons were also eliminated. At some colleges, remote new students were led through in-person events through Zoom, while others had separate remote and in-person schedules.

Rapha Onyeka, a coordinator at Baker College, said Baker took the approach of taking the general concepts of years past and then carving out logistics to make events remote-friendly and adhering to CDC guidelines.

“That said, some events would not successfully translate into O-Week 2020, and thus many of our events were created entirely from scratch,” Onyeka, a junior, said.

Anthony Nguyen, a co-advisor at Sid Richardson College, said Sid Rich O-Week had to look especially different compared to other years, with the Sid Rich building now being repurposed for COVID-19 isolation housing. According to Nguyen, most new students were either at McMurtry, Duncan or Martel Colleges. Students who were only on campus for O-Week were at Brown College, and some upperclassmen were living at Wiess College.

“I was living at Brown [College] for advisor training and for O-Week and it was pretty chaotic. I didn’t get my room assignment until the day before I moved in and I came in very much unaware of what was happening,” Nguyen, a junior at Hanszen College, said.

Nguyen said that along with new living spaces, Sid Rich O-Week groups had to find new places to meet since they were without a college commons this year.

“For O-Week groups we were assigned certain breakout rooms that were throughout the [Rice Memorial Center], Duncan Hall, Keck [Hall],” Nguyen said. “As all of Sid Rich O-Week in total, usually we were half split between the [RMC] Grand Hall and the tent by Hanszen. For the outdoor events there were points when we could gather all together.”

McMurtry College junior Rishi Vas co-advised remotely at Will Rice this year, and said his impression of Will Rice O-Week was that it was generally managed well by the coordinators, despite the two positive cases confirmed among Will Rice advisors during the week.

Isabel Sjodin, a McMurtry advisor and junior, said she felt like the O-Week coordinators successfully kept advisors informed throughout the week, while managing different news and rumors across campus.

“[The coordinators] were very open and honest with us,” Sjodin said. “I think they did a good job being upfront with us, saying like, ‘If you hear a rumor ask us, don’t spread it to your kids and cause them to panic. Approach us and let us know, we’ll do our best to find out what’s happening.’”

According to Vas, the majority of the decisions during O-Week were left up to the discretion of the individual college coordinators.

“In my opinion, when they had like two positive cases, that should have been Rice admin [who came in to shut] down in person O-Week, as opposed to [the [coordinators] or student leadership. They didn’t sign up for that,” Vas said. “I feel like the Rice admin needs to step up a little.”

In an email to The Thresher, associate director of First Year Programs Araceli Lopez, said the process for making these decisions was dependent on communication between all the different leadership involved with O-Week.

“The decision making surrounding safety measures for the week was a collaborative effort between the administration, Dean of Undergraduates office, myself, Residential College personnel i.e magisters, college coordinators, O-Week student leaders and any other campus partners or entities involved,” Lopez wrote.

Matthew Burns, one of two First Year Programs Student Directors, said that student leadership was responsible for executing the decisions made by the administration, primarily the Crisis Management Team.

“It was definitely frustrating for the coordinators to have to carry out said safety decisions, especially because the situation was constantly evolving,” Burns said. “But with that said, I think Erica and I as well as the coordinators understood that at the end of the day the situation was really dynamic and O-Week was never going to be an easy process. I think we, as well as administration, were very much learning as we went.”

Onyeka said that he was grateful for Lopez as well as Burns and fellow Student Director Erica Lee.

“Their guidance and aid are the only things that made this unique week possible,” Onyeka said.

The Will Rice Coordinators did not respond to the Thresher’s requests for comment in time for print.

Will Rice College magister Matthew Bennett said that the decision to move the college’s O-Week online was made unanimously by an ad-hoc committee consisting of the O-Week coordinators, the president, the chief justice, and the core team.

“Students would certainly prefer to have in-person activities during O-Week, but they also understand the reasons behind the move,” Bennett said. “On a positive note, the students themselves have taken the initiative to come up with new ways to maintain physical distancing that go beyond the guidelines set forth by the administration. The sense of community and teamwork that Will Rice College has shown has been truly inspiring.”

Varsha Varghese, an advisor at Baker, said that although this year’s O-Week differed from those in the past and advisors may have missed out on events that were canceled or modified, new students only know the O-Week that they experienced.

“As advisors we knew exactly what was changed and what was not the same, but I think for the new students, they didn’t know. To them, this is O-Week,” Varghese, a senior, said. “I think all the advisors, especially as a senior, I wish we could have done some of the events that we usually do in a non-pandemic, but it’s totally understandable why we didn’t do it.”

Sjodin said she thinks O-Week was a good introduction to how the rest of the semester will need to be handled.

“O-Week was definitely different than what any of us anticipated, and I think in a lot of ways it was kind of a trial period for people around all of the colleges to see what in-person interactions are actually like now,” Sjodin said. “I think it’ll just be helpful going forward because now we have a group of students who know what the rules are and can enforce them.”