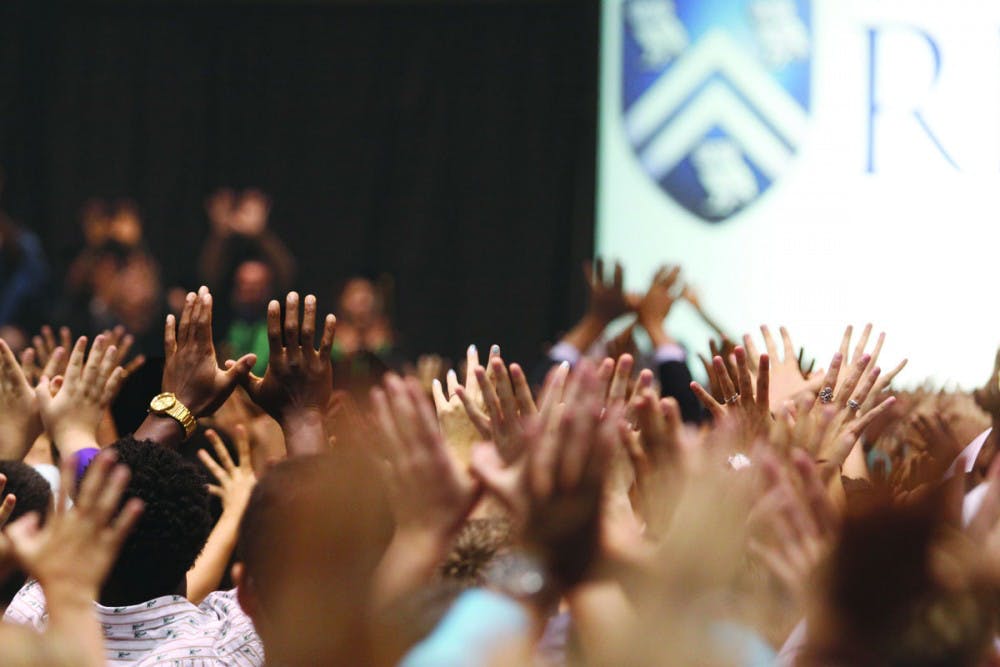 
New Rice Owls raise their hands in solidarity at the end of the Class of 2018’s Matriculation ceremony on Aug. 17, 2014. The event concluded with a speech given by then Student Association President Ravi Sheth.

Rice’s Office of Undergraduate Admission has removed the standardized testing requirements for the 2020-2021 admissions cycle due to disruptions caused by the pandemic.

“Students who are unable to submit tests, or prefer not to submit test scores, will be given full consideration in the admission selection process,” Vice President for Enrollment Yvonne Romero da Silva announced in a statement on Tuesday morning.

Romero da Silva’s statement noted the disruptions caused by the COVID-19 pandemic, which has resulted in indefinite, nationwide cancellations of both the ACT and the College Board’s SAT tests since March. Both the ACT and College Board are currently exploring options for resuming testing, which remains uncertain at the present moment.

“Current high school students are going through an extraordinary time of disruption, instability, and uncertainty at home, in their schooling, and in their communities,” Romero da Silva said. “[Rice’s] culture of care extends to our prospective student community as well.”

Earlier in April, the Student Association passed a resolution to suspend these requirements, which was initially met with hesitation from Romero da Silva. Last month, past and current SA leaders including SA President Anna Margaret Clyburn met with Romero da Silva to share their concerns.

“I am disappointed that Vice President Romero da Silva did not indicate that Rice plans to reassess its reliance on testing, nor did she acknowledge the inherent biases of standardized testing in general,” Koh, a former Jones senator, said. “Even so, I look forward to what we can do from this starting point, and I encourage the Rice community to continue advocating for fairer admission policies.”

Koh said that Romero da Silva “declined” to update him and former SA President Grace Wickerson (Brown College ‘20) about these policies after their single meeting in May. According to Koh, Romero da Silva didn’t email him or Wickerson about today’s statement, only sharing it with Clyburn.

“We had been in the dark about what was going on,” Koh said. “I hope that Anna Margaret and other students can be meaningfully included and expect greater transparency in the conversation moving forward.”

In an email to the Thresher, Clyburn said that she is glad to see this positive outcome from collective efforts by students and administrators.

“This policy change will ensure that students, regardless of their ability to access test preparation materials and/or standardized tests themselves, will be able to submit an application to Rice and be considered on a holistic basis for acceptance,” Clyburn, a Martel College senior, said. “I am grateful for Dr. Romero da Silva and the Office of Undergraduate Admissions’ openness to working with us on this.”

Romero da Silva noted that Rice will continue to use holistic admissions when selecting the class of 2025.

“[Standardized tests] are merely one factor of many that are considered in the admission process,” Romero da Silva said. “As is consistent with our holistic review, students will be given full consideration with the information they have provided regardless of their decision to submit their test scores.”