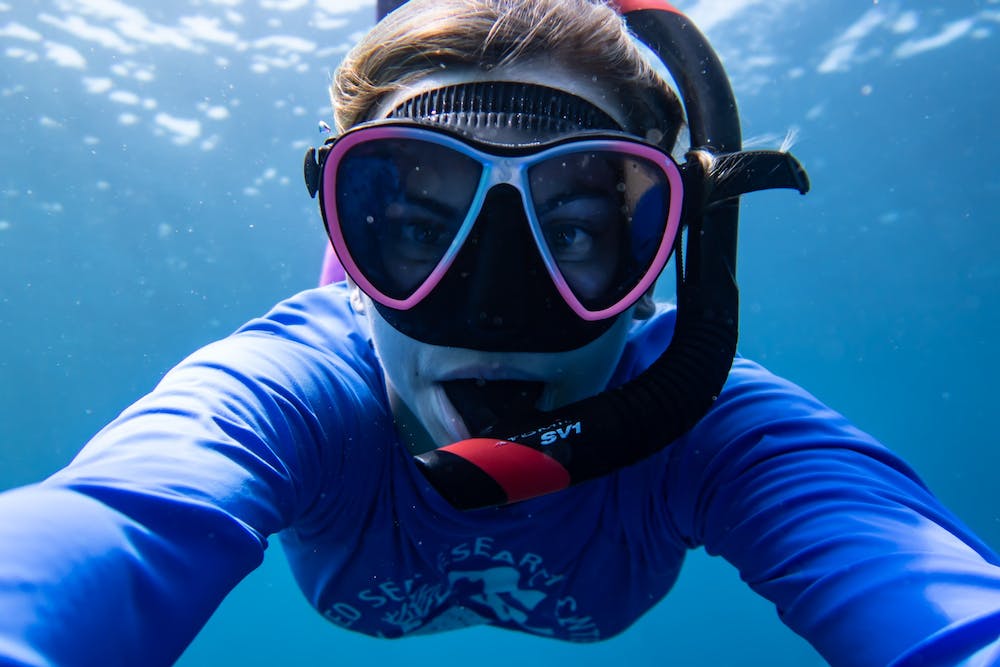 Anna Knochel (Baker College ’19) snaps a selfie while looking for manta rays in the waters of the Maldives. Her research, funded by the Wagoner Scholarship, was cut short due to the novel coronavirus.

Over 10,000 miles from Houston, off the coast of the Maldives, reef manta rays are in their peak season: Every March and April, the massive sea animals aggregate in large numbers in the water surrounding the small South Asian island nation.

Anna Knochel had been anticipating this moment for a while. A 2019 recipient of the Wagoner Foreign Study Scholarship, which funds international research projects, Knochel (Baker College ’19) began pursuing a master’s degree in marine science at Saudi Arabia’s King Abdullah University of Science and Technology last fall. Much of her time was spent preparing for her fieldwork in the Maldives and Mozambique, which would focus on the skin microbiomes of manta rays.

Knochel arrived in the Maldives Feb. 19, eager to start her research. But March 15, less than a month later, she was on a plane back to the United States.

“I was really just devastated,” Knochel said of her unexpected return. “For me to lose something I’ve been working towards for a year and a half, for a better part of my undergraduate years, and really like, my whole life — for that to be taken away, I don’t know. It was hard.”

Knochel is one of many members of the class of 2019 who had international research supported by fellowships and grants cut short due to the unfolding global pandemic.

When Knochel arrived in the Maldives back in February, COVID-19 was barely on her radar.

“I’ll be honest, I did not think that things were going to get as bad as they are now,” Knochel said. “The gravity of the situation is still setting in for me.”

Instead, Knochel was focused on her research. She studied manta rays at a resort with Manta Trust, a United Kingdom-based nonprofit. Three days a week, Knochel would spend her entire day out on a boat, looking for mantas in the lagoons and jumping into the water to identify them and swab them for their mucus.

It wasn’t until March 12, when Knochel’s project was canceled, that she realized the virus would seriously affect her life. When that happened, she wanted to return to her university in Saudi Arabia, but the country closed its borders before she could book a flight. Fearful that she might get stranded in the Maldives with no research to do, Knochel purchased a ticket back to the U.S. on March 15 — six hours before the plane left. She’s currently staying with a friend in Houston.

It took one night of sleep for the gravity of COVID-19 to settle in for Ilana Nyveen.

Nyveen was pursuing an independent study project as a Watson Fellow, a program which funds a year of international travel and research. Her project explored what it means to be an ape — whether that’s a chimpanzee, a gorilla, or a human — and how that can inform understandings of what it means to be a human being living on planet earth. In her seven and a half months abroad, Nyveen went to Indonesia, India, Thailand and Australia, where she lived on farms, worked with environmental activists and observed apes.

In March, Nyveen traveled to Scotland, where she had plans to live for two months in an apartment — longer than she’d been in any one place for the entire trip — and intern at the Edinburgh Zoo. She was there for two weeks before her internship was canceled and she decided it might be time to go home.

“It was a really interesting time to be dislodged because I was theoretically supposed to be the most stable, the most normal, almost, that I’d been up until that point,” Nyveen said. She caught a flight home to Montreal, Canada March 17.

For Mackenzie Kubik, getting home took a little bit longer. Kubik (Sid Richardson College ’19) was spending her year studying the intersection of feminism, gender, human rights and tea (her favorite beverage) on the Zeff Fellowship. For her independent study, she traveled to India, Kenya, Turkey, Japan and various locations in South America including Chile and the Patagonia  region to interview people working in or studying the tea industry.

Kubik first became aware of COVID-19 during her time in Japan, where she spent over a month living with an elderly tea master and attending the master’s tea ceremonies (often having her wrist slapped with chopsticks when she erred in the ceremonial procedures). Kubik was in Japan in February when the cruise ship Diamond Princess was quarantined in Yokohama, but it wasn’t until she was in Chile that Kubik was seriously concerned about the global pandemic.

“Once I arrived in South America, no one was really talking about it,” Kubik said. “I mean, there were rumors, but it was all a bit racist honestly, and no one was concerned about it affecting Latin America.”

That perception changed rapidly mid-March, when Kubik caught wind of plans by other Rice graduates on fellowships to return home and received notice from the U.S. government that violence in Chile against foreigners was escalating rapidly. Kubik decided she needed to return home on March 22, which required a flight from Puerto Natales, a city in the south of Chile, to Santiago, and then a flight from Santiago to the United States. Ultimately, she made it to the U.S. on March 25 — but not before many flight cancellations.

“I feel lucky that I was able to get the flights I did, even though in the process I had six flights canceled, which I’m now trying to get reimbursements for,” Kubik said. “It was pretty psycho, but I did make it back, so I’m one of the lucky ones.”

During the many times in her months abroad when Eliza Martin felt homesick, she thought of two things.

The first was how it felt when she was awarded the Watson Fellowship. Martin (Baker ’19) proposed a project that explores how the children of immigrants care for their parents emotionally, financially and culturally, and how those relationships evolve over time. Martin’s proposal was deeply personal — the child of an immigrant herself, Martin said she feels like she’s been working towards this research her entire life.

The second thing Martin thought about in moments of loneliness was how good it would feel to step off the plane in July and be able to hug her family once again. But that never happened — when she was reunited with her family in Austin, Texas after a flight from New Zealand that left on March 18, Martin had to keep her distance.

“I got off the plane, and didn’t get to hug my family because I needed to quarantine,” Martin said. “That wasn’t great.” Still, she said she is certain coming home was the right thing to do.

Before returning home, Kubik made sure to bring tea.

“I stocked up on like, six bags of yerba mate before flying back to the U.S.,” Kubik said. “So I’ve been drinking yerba mate and doing the conversation club that I was going to do anyways, and interviewing people over Skype, so that’s been nice. Obviously not totally the same, but as good of a substitution as I could ever ask for.”

Skype interviews and remote research are all Kubik can do for now — although she said she’d love to fly to Buenos Aires tomorrow and start her work in the Patagonia region, she has no idea if or when that will be possible.

For Martin, video chats won’t suffice for many of the conversations she had planned. Although she still intends to speak to experts, she doesn’t feel comfortable having the more intimate conversations she’d been having with the children of immigrants virtually.

“My project — especially my interviews — rely on people trusting me and empathy and stuff that I don’t think comes through a screen or comes through FaceTime,” Martin said.

Although Martin would like to return to her research, she’s not sure that will be possible — she has plans to start law school at the University of Chicago in the fall. Still, she is grateful for the time she did have on the Watson.

“The fact that I didn’t get the last four months doesn’t negate how much of an impact the eight months had on me, because time, I think we’re all realizing, is pretty arbitrary,” Martin said. “It doesn’t take away from the growth that I’ve undergone, from the conversations that I’ve had, from the friends that I’ve made.”

Nyveen feels similarly — although she let herself wallow in disappointment when she first realized she’d be coming home early, she said she believes she is more fortunate than many other people right now, such as the class of 2020.

“I feel like there’s maybe an outside perception that I have it bad, because I had this big exciting experience interrupted, but I actually feel much worse for the Rice seniors,” Nyveen said. “I can go back abroad. It won’t be exactly the same, and it won’t quite be what the Watson is supposed to be, but I can go back abroad and I can do my thing. But I feel like, I don’t know, graduation is such a temporally specific thing that you can’t really do it again.”

Nyveen plans to resume her research as soon as possible.

“I have more to do before I’ll feel done,” she said. “I was supposed to go to Uganda to work on a chimpanzee field site. That’s so cool! I want to do that still.”

Knochel also intends to resume pursuing her master’s degree in marine science and studying manta rays. But like everyone else, she has no idea when that will be.

“It’s all up in the air right now,” Knochel said. “I don’t know if I’ll be able to get back there in a month, two months, three months, four months. I don’t know if I should look for a job, or if I should have my bags packed and ready to go on the first available flight.”

Although that uncertainty is frustrating, Knochel said she is grateful to be sheltered, safe, and somewhat stable.