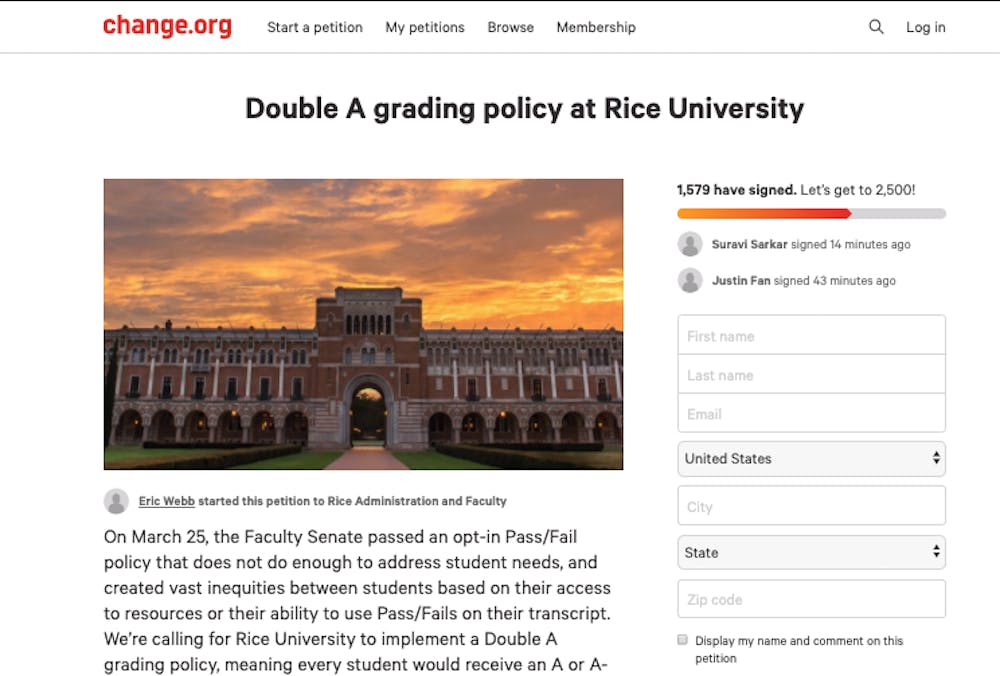 Students petition for the administration to adopt the Double A grading policy.

After a recent Thresher opinion piece in support of Rice adopting a Double A grading policy, students mobilized their support through the creation of a petition. The Faculty Senate Executive Committee unanimously rejected this proposal on April 10, according to Christopher Johns-Krull, speaker of the Faculty Senate.

The Double A grading model posits that all students receive an A or A-minus in their courses at the professor’s discretion.

Johns-Krull said that the EC met to discuss “a number of additional potential academic relief measures” and unanimously rejected the Double A proposal on April 10. Johns-Krull emailed all college presidents yesterday evening with this update.

“The EC felt such a policy violates the fundamental academic integrity of the University, and would put in jeopardy the integrity and validity of any Rice transcript for years to come,” Johns-Krull wrote in an email to the Thresher. “This view is shared by the President, the Provost, the Dean of Undergraduates and the Dean of Graduate and Postdoctoral Studies.”

Dean of Undergraduates Bridget Gorman and Interim Provost Seiichi Matsuda did not respond to the Thresher’s multiple requests for comment in time for publication.

Johns-Krull said that the EC has “tentatively approved” several other academic relief measures that will be placed on the Senate agenda for adoption, including extending the drop deadline for classes to June 1, once all grades are known.

“We are verifying that they meet all university and accreditation policies ... and the [final version of all policies] will be posted on the Faculty Senate website in the next day or two,” Johns-Krull said.

Additionally, the Student Association passed a resolution on Wednesday to supplement the original academic relief measures passed by the Faculty Senate on March 25. Notably, the Faculty Senate’s previous vote allowed undergraduates to optionally designate any classes as pass/fail and extended the drop deadline to the final day of classes.

The SA is also circulating a survey via college presidents and other student groups in order to determine which policy most accurately represents the student body’s preference.

In their survey, the SA requested that all students preferentially rank several different options, which are defined in the survey, to determine potential policies to advocate for.

Eric Webb, one of the co-authors of the Double A op-ed and a creator of the Double A petition, said that it was ironic that Rice calls for “unconventional wisdom” among students, but limits itself to responding according to the actions of its peers. Webb’s petition received more than 1,500 signatures.

“Rice's administration should choose a policy that is consistent with values like equity and compassion for Rice students, regardless of the actions other institutions take,” Webb, a Duncan College sophomore, said. “Our group was inspired by the advocacy of students at other universities for Double A grading and wanted to push for Rice to consider such action to support students this semester.”

The multitude of potential policies has generated significant contention amongst students.

Alex Berlaga, a sophomore at Jones College, made a post on Facebook with his argument against the Double A system amidst campuswide discussion over the policy. In his post, Berlaga said that this policy would cause more harm than good, primarily because it removes the incentive to learn and sends a message that inaction is welcomed in times of struggle.

Berlaga said he supports the optional pass/fail policy but believes it could be improved through an optional universal pass (students could either receive the letter grade for the class or a P, regardless of grade) policy, ensuring nobody can fail a class.

“People who suggest that I [oppose the Double A policy] selfishly do not know my circumstances,” Berlaga said. “I truly think that my solution is the best for our education system, does not hurt those who are most affected by the coronavirus, and does the best we can to help everyone in the Rice community.”

Alex Worley commented on the Facebook thread against the Double A policy, saying that it was not feasible and would cause Rice to lose its status as an accredited university, an issue also mentioned by Johns-Krull after the EC rejected the proposal.

“This idea was something that a professor in the Faculty Senate mentioned to my class,” Worley, a Jones sophomore, said. “It has to do with general guidelines that universities must follow in order to give degrees that are accredited.”

Alexus Arizola, a Will Rice College sophomore, said that a Double A system helps the students who need it the most, particularly those with academic-based scholarships, first-generation and low-income students.

“I understand that many oppose it because Rice loses accreditation, but I don’t necessarily believe Rice should be putting themselves on a pedestal at the expense that their most vulnerable students must suffer,” Arizola said.

Arizola said she also saw the merits of policies in which letter grades are maintained and no student fails, but the Double A policy was the most equitable in her eyes.

“This isn’t the time to uphold students to the same academic standards as before,” Arizola said. “I’m sure each and every one of us still wants to learn as much as we possibly can, but the environments we are in simply do not allow us to do that. Our grades shouldn’t be a reflection of situations we can’t change.”

Summer Shabana, a Baker College freshman, said that the Double A contention was highlighted within her residential college’s group chat, which became toxic when some students made comments that the majority shouldn’t pay for the minority’s misfortune. Shabana said other students made fun of the policy by suggesting a “Double F policy” and suggesting people should just choose their own grades.

“Instead of trying to understand the validity of the other side, [some students] were asking [first-generation and/or low-income] students to be accommodating,” Shabana said. “It was so emotionally straining to explain why those in much more privileged situations should sacrifice an ounce of their privilege to help the less fortunate.”

Shabana said that while the policy might be supported by some for the wrong reason and while it does have its faults, ultimately there are students who are unable to voice their opinion on the Double A system who need it.

“The reality is we will not be able to accurately measure how many people [the policy] will help because those people are unable to fill out the survey due to lack of internet connection, or those people are afraid to grovel and admit their struggles to professors whom they want to maintain a professional relationship with,” Shabana said.

Similar movements for the Double A system have occurred at other universities. Rachel Borshchenko, an undergraduate student at Columbia University, also commented on Berlaga’s Facebook post and mentioned that Columbia University enacted a mandatory pass/fail policy that was eventually received well by most students.

“At first, there was some frustration that the policy for pass/fail was not opt-in,” Borshchenko said in a message to the Thresher. “The deans of the colleges responded saying that [an opt-in policy] was inequitable and that the policy should be kept as universal pass/fail.”

Borshchenko said that Columbia students also formed a petition in support of an all A policy, which received over 1500 signatures, as well as an op-ed in the campus newspaper.

“I don’t think the policy gained very much traction as the Columbia administration made a pretty firm decision about the grading,” Borshchenko said. “They made sure to note that [...] Columbia had spent time conversing with graduate and professional schools and was confident that they would be understanding with regards to students not having a letter grade this term.”

Following a student petition for a universal pass system at Reed College, the dean of the faculty wrote a letter sent to Reed College students defending their optional pass/fail policy because a universal pass or a Double A system “would undermine the meaningfulness of Reed grades and Reed GPAs going forward and threaten our ability to maintain [Reed’s] accreditation.”

The SA resolution that was passed this week is separate from the support for a Double A policy, which gained traction after the resolution had already been passed.

According to John Cook, the SA treasurer, this resolution is necessary because it addresses a much broader range of issues, including a request for Rice to initiate contact with graduate schools/scholarships to encourage their leniency towards the optional pass/fail policy.

Peer institutions have implemented similar policies with either optional or cancelled final exams, including the University of California, Los Angeles, Northwestern University and Stanford University.

According to SA president Anna Margaret Clyburn, the SA resolution passed a few days ago is still relevant even with the introduction of the Double A policy, and has been communicated to relevant administrators and offices, including the Office of Academic Advising, Dean of Undergraduates Bridget Gorman and Interim Provost Seiichi Matsuda.

“The resolution’s contents are less focused on an overarching grading policy and more so intended to communicate accommodations that professors can and, according to student body representatives, should make,” Clyburn, a Martel College junior, said.

Johns-Krull said that instructors have always had flexibility in determining the details of how their courses are run as well as what type of assignments should be utilized.

“Instructors should, and I believe will, strive to come up with appropriate solutions given the circumstances and the nature of their particular course,” Johns-Krull said. “I believe it is appropriate for the administration to remind faculty of these concerns [outlined in the SA’s resolution] as we finish out the semester.”

[4/12/20 1:15 p.m.] The story was updated to reflect the Executive Committee’s recent rejection of the Double A policy. The headline was also updated.