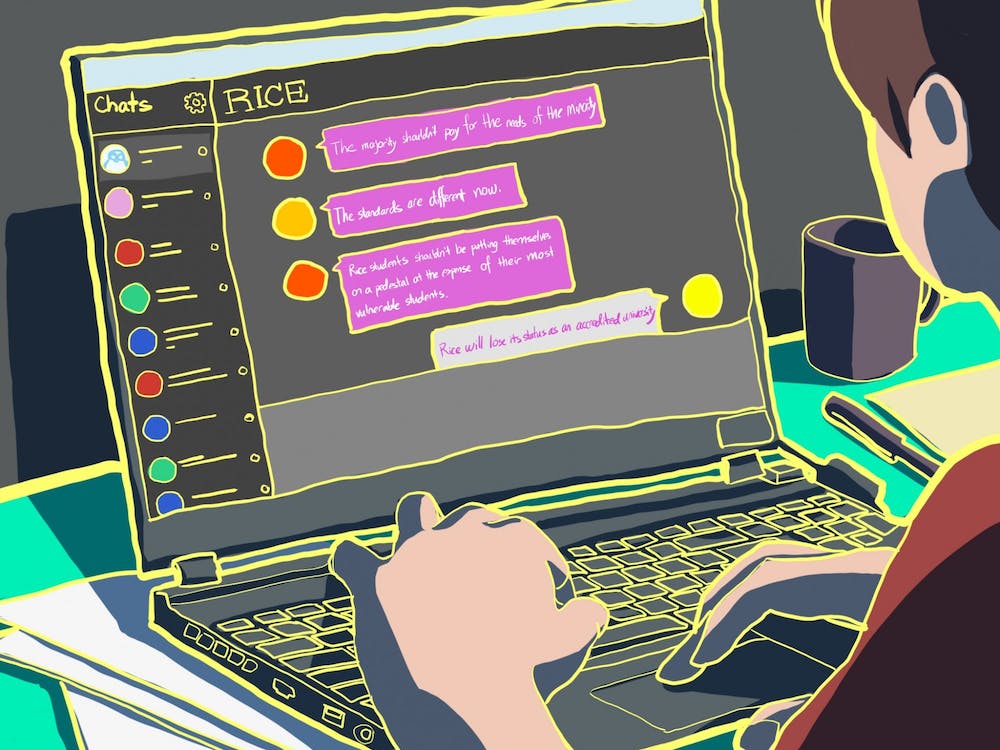 After recently rejecting a proposal for the Double A grading policy, the Faculty Senate will deliberate over potential additional accommodations at their April 22 meeting. However, the Student Association released data from a survey of 34.6 percent of the student body on Monday which showed the majority of student support was in favor of the Double A policy.

According to Christopher Johns-Krull, speaker of the Faculty Senate, the motions on the agenda were already in discussion before the passing of the SA resolution last week and are not specifically in response to the resolution, which called for optional finals and open book exams without three hour time limits, among other things. Johns-Krull said there are not additional motions under consideration at this time.

The potential accommodations include extending the drop deadline to June 1, after final grades are posted, and ensuring that undergraduate and graduate students will not be placed on academic probation, suspension or be dismissed given the outcome of Spring 2020 courses unless explicitly approved by the dean of undergraduates or the dean of graduate and postdoctoral studies.

John Cornwell, assistant vice president for the Office of Institutional Effectiveness, said that Rice is accredited by the Southern Association of Colleges and Schools Commission on Colleges and that the principles of accreditation include integrity and clear documentation and publication of all policies. This includes following policies and procedures when changes are made at the university, such as through policies regarding grading and what appears on a transcript.

Cornwell said that while the optional pass/fail system did not involve major changes to grading policies and procedures, a Double A policy would have.

“The Double A policy would redefine what an A and A- represents, [such as] what does it mean in quality points if an A could now represent student proficiency that last semester was considered C or B level,” Cornwell, the SACSCOC liaison for Rice, said. “Some would find that this threatens the integrity of the transcript record of grades for the 2020 spring semester.”

Anna Margaret Clyburn, the SA president, said she was disappointed that the Double A policy was rejected but understands there are constraints in place that limit what the Faculty Senate can approve.

“We [still] do see areas for additional accommodations in the form of a reporting form for students whose professors have not made the appropriate accommodations and a stream-lined process for students requesting to drop below the 12 credit hour full-time requirement,” Clyburn, a Martel junior, said.

The Student Association survey data regarding which academic accommodations were most supported by students included responses from 1,383 undergraduates. The report included which policies were most popular across the whole student body, among various vulnerable student populations, and among students that plan to pursue post-graduate programs as well as the main takeaways from the written responses received.

The survey report showed that after the Double A policy, the most supported systems were the universal A/B/C grading policy and the optional pass/fail system already in place.

grade of pass to every student in every class for the Spring 2020 semester regardless of the grade they had earned up until [...] the COVID-19 pandemic,” Wheelan wrote in a message to SACSCOC members. “This would fly in the face of the entire idea of integrity, academic and professional, and would create accreditation issues for the institution.”

Washington and Lee University, also accredited by the SACSCOC, however, did adopt a mandatory credit/no credit system for the spring term, and peer institutions across the nation have adopted universal pass/fail systems. Yale University recently switched from an optional pass/fail system to a universal policy, and Columbia University, Harvard University and the Massachusetts Institute of Technology have also adopted similar mandated policies.

According to survey data, students expressed that they are finding that faculty have made classes objectively more difficult during this time. Other common opinions from the survey include a general sentiment that no student should be allowed to fail amidst a pandemic and that students are facing very real barriers to success, such as in the form of exacerbated mental illness and technological issues.

Clyburn said that the survey data was distributed to the Office of Academic Advising, the provost, the Faculty Senate speaker, the dean of undergraduate's division and the Wellbeing Center and hopes that the demographic data collected and personal accounts will be used to inform additional support policies from these offices.

Eric Webb, co-author of the opinion piece supporting the Double A policy, said that he was disappointed that the Faculty Senate rejected the student voice.

“[The Faculty Senate] chose to prioritize an abstract concept of academic integrity over the tangible needs of many students,” Webb, a Duncan College sophomore, said. “[But] our work has pushed the conversation, and I think extending the drop deadline will help many students who may need to meet GPA requirements to maintain their scholarship.”