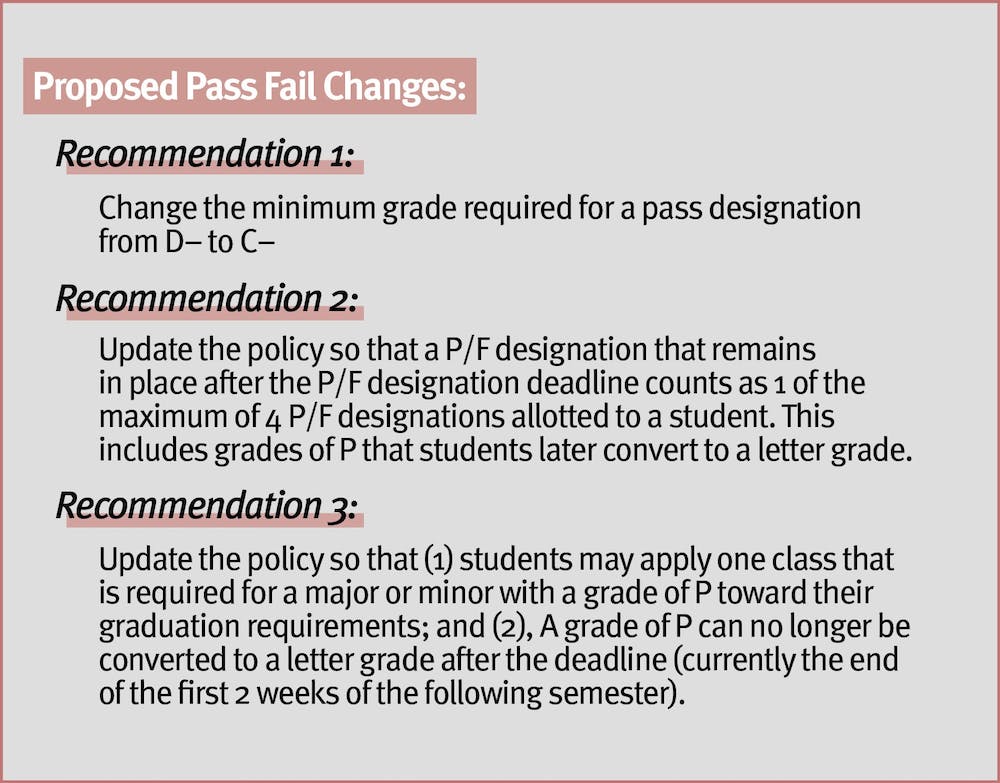 The Faculty Senate working group investigating the pass/fail system at Rice published their final report last week for the Faculty Senate to deliberate over. The recommendations have generated significant backlash from students, evidenced by the Student Association Senate gathering survey feedback, with over 600 responses, alongside the development of a resolution of opposition to the proposed changes.

The first recommendation was to raise the minimum qualification for a “Pass” from a D- to a C-.

The second recommendation was to remove the ability of students to re-use a pass/fail in the future, even if they take off the pass/fail before the deadline of the second week in the following semester.

The third recommendation has two parts: to officially allow students to pass/fail a single major or minor requirement with the “Pass” remaining on the transcript, and to also not allow any P’s to be uncovered by the registrar after the deadline.

Dean of Undergraduates Bridget Gorman said that the determination of whether to alter the pass/fail policy may not occur immediately.

“We’ve had plenty of examples in the past where the executive committee could table the vote, vote entirely on it or just vote on specific parts,” Gorman said. “The best thing students can do is to articulate that and get those ideas in front of the committee and faculty senate.”

According to Solomon, raising the minimum grade for a “Pass” designation aims to standardize Rice’s grading and transfer credit policies, as well as incentivize students working in group projects to carry their share of the workload.

“Changing the standard would help address the concern that students in a group might be at a disadvantage if other members of their group are taking the class pass/fail, while not even affecting that many of our students, as seen by our data.”

The data provided by the registrar indicates around 5 percent of courses taken pass/fail since 2014 had grades of D or D-.

Jayson Taylor, a Lovett College senior, said that this recommendation doesn’t account for difficult introductory courses that less prepared students may get D’s in, even if the number of students who get D’s may appear to be small.

“A lot of underrepresented minorities come from schools that are not on the same calibre as other schools,” Taylor said. “I know a lot of people of color who got D's in hard introductory classes such as General Chemistry. A lot of Black students, especially in their freshman year, only felt comfortable taking certain classes with the opportunity of using a pass/fail on it.”

Taylor said that these proposals may not fully account for the diversity of Rice students’ backgrounds.

“I wish that there was a magister or even underrepresented minority on the working group, who could relate to the student body more,” Taylor said. “It seems like they're grouping all Rice students as just Rice students, but we're diverse and come from different backgrounds. With different backgrounds, some people have it better than others in terms of the resources available to them [in high school] that will affect their academics here.”

“As a fail-safe in the case that the Faculty Senate approves the first recommendation — to raise the standard of a pass— we would recommend that the university provides professors with the autonomy to adjust the minimum required grade based on the difficulty of their course,” Mundy, a Sid Richardson College junior, said. “This addresses the fact that courses at Rice aren’t all the same in level of difficulty.”

According to Sanat Mehta, the SA representative of the Pass/Fail working group, the second recommendation was to amend the fact that students are effectively getting eight pass/fails instead of four.

“The system as it is currently is a little bit too lenient,” Mehta said.

Solomon said that this recommendation will update the policy to better suit the intent of pass/fail.

“In effect, students right now can take a class every semester pass/fail,” Solomon said. “We didn’t feel like that was the intent of the pass/fail system. It’s more about being selective of which courses you’re taking pass/fail and to incentivize students to take courses that might be a stretch for them.”

Taylor said that this recommendation would limit the classes students look to take, and lower incentive for students to work hard in a pass/failed class to eventually uncover the letter grade.

“This uncovering rule takes away from the idea of taking a larger variety of classes,” Taylor said. “[This recommendation] means you now have to be more careful about which classes to use it on. I wouldn't have taken certain distribution classes without pass/fails being available — I would have just stuck to the ones that had mostly A's.”

Christina Lee, the SA treasurer, said that the ramifications of the final recommendation, which posits that students must retake pass/failed major requirements if there are multiple, should be advertised more clearly.

“I don't know if students are aware of this caveat of the recommendation, that they would have to retake a course and not be able to graduate until they did,” Lee, a Lovett College junior, said. “This should be spelled out clearly, and it’s alarming that it’s not.”

According to Solomon, the working group was most concerned with this loophole of uncovering a pass automatically before graduation.

“If a student pass/fails a major requirement, in reality in the final semester before they graduate the registrar’s office will automatically take those Passes off,” Solomon said. “Those grades aren’t factored into their GPA - this is a strategic way of using the pass/fail system. The students aren’t violating any policy but are really just being clever with the system.”

Solomon said that this loophole can affect the reputation of Rice’s GPAs.

“Essentially, this is artificially inflating GPA until the P’s are automatically removed, which is typically long after the period of application for graduate schools, jobs, etc.,” Solomon said. “This can tarnish Rice’s reputation by diluting our GPAs. Although it appears to be widespread, if there are students that don’t know of this loophole, they could also be at a disadvantage when compared to their peers who are aware of this, creating potential inequality.”

A previous article discussed the trend observed with the overall rise in Rice GPAs since 2004.

According to Scott Solomon, these recommendations were sent out despite the student body’s initial concerns, because the working group believes these proposals better represent the original purpose of the pass/fail system.

“Through my research, I believe Duke is experimenting with allowing for most introductory courses to just be graded as satisfactory/unsatisfactory,” Mundy said. “We also saw something similar with MIT allowing students to P/F their entire first year.”

Mehta said that because of the lack of overwhelming preliminary support by the Faculty Senate for the changes, it is key for students to speak up about the issue.

“A lot of people in the Faculty Senate may not have strong feelings on this issue. It’s important that students express their opinions on this, because the faculty seems pretty ambiguous on the topic.”

Grace Wickerson, the current SA president, said that the Faculty Senate’s last controversial decision, to proceed with the credit hour limit in 2016 amidst student protest, was likely due to more rooted beliefs on the issue.

“In this case, there's not the strongest motivation from the student wellbeing perspective that’s pushing this issue,” Wickerson said. “It’s more on the reputation and potential grade inflation of Rice that pass/fail might have.”

Johns-Krull said that there wasn’t any preliminary indication of which way the Faculty Senate was leaning.

“Generally, there wasn't an overwhelming reaction one way or another,” Johns-Krull said. “Some faculty certainly have issues with some of the specific recommendations. I'm not at all confident that the exact recommendations will be passed.”